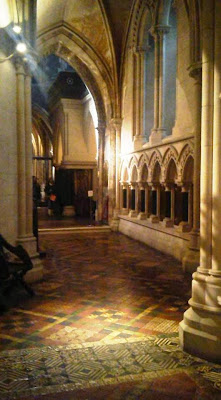 Today is being marked throughout the world as the fiftieth anniversary of the murder of President John F Kennedy in Dallas on 22 August 1963. Everyone of my generation can remember where he or she was on first hearing that news on that day, which has been marked with particular poignancy in Ireland, especially in Co Wexford.

But those commemorations and memories have totally overshadowed the fact that today, 22 December, is also the feast of Saint Cecilia, the patron saint of music, musicians and composers, and the one-hundredth anniversary of one of the great British composers, conductors and pianists of the 20th century, Benjamin Britten, who was born in Lowestoft in Suffolk on 22 December 1913.

Britten’s best-known works include the opera Peter Grimes (1945), his War Requiem (1962), the chamber opera The Turning of the Screw (1954) and the orchestral showpiece The Young Person’s Guide to the Orchestra (1945). With Peter Pears and Eric Crozier, he founded the annual Aldeburgh Festival in 1948.

His examiners at the Royal College of Music included the composers John Ireland and Ralph Vaughan Williams.

A large number of Britten’s works have Christian themes, and in the 1960s he was an active Anglican, sympathetic on the 1960s to the radical views of Bishop John Robinson, author of Honest to God. A life-long pacifist, he was a member of the Peace Pledge Union and one of the original sponsors of the Campaign for Nuclear Disarmament (CND) in 1958. In 1937, he composed a Pacifist March to words by Ronald Duncan for the Peace Pledge Union.

He died on 4 December 1976, and although a burial in Westminster Abbey was offered he was buried at the Church of Saint Peter and Saint Paul, Aldeburgh, where is commemorated in a memorial window by John Piper.

I took part in Choral Evensong in Christ Church Cathedral last night [21 November 2013], which marked the eve of Saint Cecilia, and recalled the centenary of Benjamin Britten’s birth, with both mentioned in the intercessions and reflected in the choice of music.

The anthem was Britten’s setting of WH Auden’s Hymn to Saint Cecilia, and the concluding organ voluntary was Britten’s Prelude and Fugue on a Theme of Vittoria.

In a garden shady this holy lady
With reverent cadence and subtle psalm,
Like a black swan as death came on
Poured forth her song in perfect calm:
And by ocean's margin this innocent virgin
Constructed an organ to enlarge her prayer, And notes tremendous from her great engine
Thundered out on the Roman air.
Blonde Aphrodite rose up excited,
Moved to delight by the melody,
White as an orchid she rode quite naked
In an oyster shell on top of the sea;
At sounds so entrancing the angels dancing
Came out of their trance into time again,
And around the wicked in Hell's abysses
The huge flame flickered and eased their pain.
Blessed Cecilia, appear in visions
To all musicians, appear and inspire:
Translated Daughter, come down and startle
Composing mortals with immortal fire.

I cannot grow;
I have no shadow
To run away from,
I only play.
I cannot err;
There is no creature
Whom I belong to,
Whom I could wrong.
I am defeat
When it knows it
Can now do nothing
By suffering.
All you lived through,
Dancing because you
No longer need it
For any deed.
I shall never be Different. Love me.
Blessed Cecilia, appear in visions
To all musicians, appear and inspire:
Translated Daughter, come down and startle
Composing mortals with immortal fire.

O ear whose creatures cannot wish to fall,
O calm of spaces unafraid of weight,
Where Sorrow is herself, forgetting all
The gaucheness of her adolescent state,
Where Hope within the altogether strange
From every outworn image is released,
And Dread born whole and normal like a beast
Into a world of truths that never change:
Restore our fallen day; O re-arrange.
O dear white children casual as birds,
Playing among the ruined languages,
So small beside their large confusing words,
So gay against the greater silences
Of dreadful things you did: O hang the head,
Impetuous child with the tremendous brain,
O weep, child, weep, O weep away the stain,
Lost innocence who wished your lover dead,
Weep for the lives your wishes never led.
O cry created as the bow of sin Is drawn across our trembling violin.
O weep, child, weep, O weep away the stain.
O law drummed out by hearts against the still
Long winter of our intellectual will.
That what has been may never be again.
O flute that throbs with the thanksgiving breath
Of convalescents on the shores of death.
O bless the freedom that you never chose.
O trumpets that unguarded children blow
About the fortress of their inner foe.
O wear your tribulation like a rose.
Blessed Cecilia, appear in visions
To all musicians, appear and inspire:
Translated Daughter, come down and startle
Composing mortals with immortal fire.

Posted by Patrick Comerford at 21:08 No comments: