A stopover at the old railway
station in Kilmessan 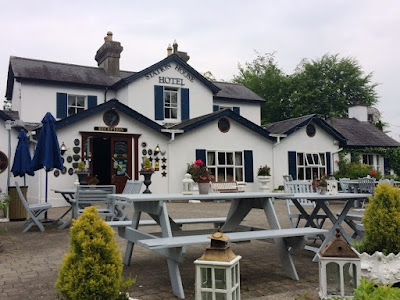 The Station House Hotel, Kilmessan, Co Meath … an old railway station with all the charm of a country house hotel (Photograph: Patrick Comerford, 2015)

I am in Kilmessan, Co Meath, this evening and staying overnight at the Station House Hotel.

Kilmessan is a quite village off the M3 and just a short distance from Dunshaughlin, Navan, Trim and Ratoath. On the way here I stopped nearby at Killeen Castle, once the home of the Plunkett family, Earls of Fingal, the nearby ruined church, and the neighbouring 800-year old Dunsany Castle, once the home of another branch of the Plunkett family who for generations have held the title of Lord Dunsany.

The Station House Hotel is a country house hotel and restaurant set in acres of woodlands and manicured gardens, providing an idyllic a country escape, away from the bustle of daily life. It has been run as an hotel for more than 30 years but was once a train station and the hotel grounds retain some of the original fixtures, including the old railway bridge and turntable.

The Dublin and Meath Railway was incorporated in 1858, to build a railway from Dublin to Athboy and Navan. The original intention was to provide a junction with the Great Southern and Western Railway near Lucan but this proposal was abandoned because of opposition from the Midland Great Western Railway, which later leased the Meath line for £10,000.

The station and railway opened in 1862. Travel to Trim or Athboy was completed by changing at Kilmessan on the Dublin/Navan train where passengers boarded a local line.

A train left Broadstone on the north side of Dublin at 10 a.m. on Sunday mornings, carrying many anglers, sightseers and shooting enthusiasts to either Navan or Kilmessan. At Kilmessan, the anglers made their way to the banks of the River Boyne to join shooting parties on the nearby hunting grounds.

Sightseers also travelled to Kilmessan in large numbers in the summer months to visit the Hill of Tara, which remains one of the main visitor attractions in Co Meath. 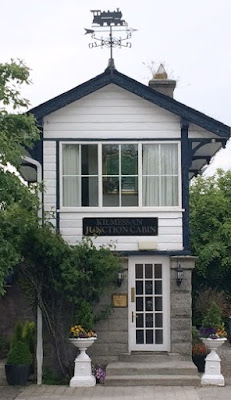 The old signal cabin still stands at one end of the former station (Photograph: Patrick Conerford, 2015)

In the 1900s, this train station was a livery stop for both Co Meath and Co Westmeath. At one end is a gateway making it a turn-point for trains returning to Dublin and the old signal cabin is at the other end.

During the Irish civil war, the station at Kilmessan was burned in 1922 and all the telegraph poles between Drumree and Kilmessan were cut.

The last passenger train through Kilmessan ran in December 1947. In the following year, Kilmessan junction was reduced in status from a “station” to a “halt.” The 45 ft turntable was dismantled in 1950 along with one or two sidings and the pedestrian crossover bridge.

The railway remained open for freight traffic until 1963. At the time, cement and livestock were the main items handled at the station.

Chris and Thelma Slattery, who also owned the Waterside House Hotel in Donabate, Co Dublin, bought the Station House Hotel in 1981, the third family to own the old train station, and transformed it into a guest house in 1983.

The remains of the old station at the Station House Hotel today include the safe made by Milners Safe Company Ltd, London and Liverpool, fireplaces and the platforms, which stand outside the main door of the hotel. The remainder of the turntable lies at the end of the wooded area near the bridge.

In the morning I hope to explore a little more of this quiet country hotel, its grounds and the surrounding countryside.