During a recent walk through the suburban areas of Knocklyon, as dusk turned to darkness in one of these early winter evenings, I stopped to look at two 18th century houses than enhance the architectural legacy of this suburban part of south Dublin, Idrone House on Idrone Avenue and Mount Michael on Scholarstown Road. Both are close to Knocklyon Shopping Centre.

Idrone House, on Idrone Avenue, which has put on the market recently, and is attracting attention less for its architectural features and merits than the story of the celebrity who lives here and her reasons for selling the house.

Idrone House, facing Knockyon shopping centre and parish church, is a detached, five-bay two-storey former country house, built ca 1790. Although it is located behind electronic gates, it is not completely hidden, and from the footpath outside it is possible to appreciate that Idrone House is essentially a country house in the suburbs.

There is a full height bow to the south end. The house has rough-cast rendered walls, timber sash windows and a replacement glazed timber door with a timber surround and sidelights, all under a radial depressed-arched fanlight.

There is a channelled render surround, a hipped slate roof behind the parapet, and rendered chimney stacks. It has 3,500 sq ft of floor space, making it two or three times the size of an average semi-detached house in the Dublin suburbs. The house still has much of its original fabric and unusual proportions, with a low ground floor sill level, and it acts as a landmark in this area.There are extensions and outbuildings to the rere.

Despite encroaching suburban developments, this house still stands in grounds of half an acre and manages to retain some of its original and elegant settings, enhanced partly by an old, large tree standing in the garden. 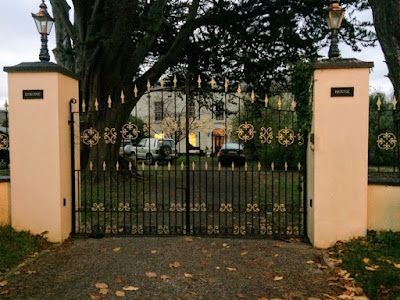 Idrone House is ‘a landmark’ in the Knocklyon area (Photograph: Patrick Comerford, 2016)

Architectural archives describe Idrone House as ‘a landmark in the area.’ There is no evidence to substantiate a claim in recent reports of this sale that at one time Idrone House was the residence of the Archbishop of Dublin.

Idrone has a drawing room with sash windows and working shutters while the ceiling has ornate historically-sound mouldings.

A short walk away, facing onto Scholarstown Road, Mount Michael is another partly-hidden house in Knocklyon that is worth looking out for.

The older section at the rear of the house was built in the early part of the 18th century, at a time when coach road ran past the front door.

This is a detached, three-bay, two-Storey over basement house that dates back to the 18th Century house. The newer section, which is now the main entrance, was added about 200 years later and some local historians claim that it appears to be the work of an Italian architect. A feature of the house is a little spire on the roof.

For the past half century, Mount Michael has been the home of the Harrison family, and it remains a hidden oasis in the middle of expanding suburban developments. 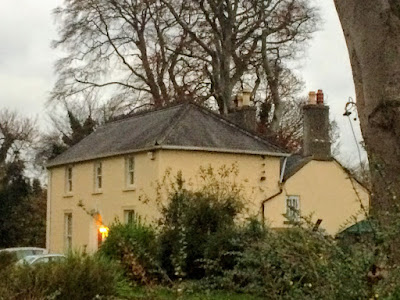 Mount Michael was built in the early part of the 18th century (Photograph: Patrick Comerford, 2016) 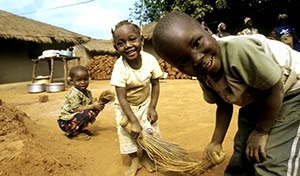 The season of Advent began on Sunday [27 November 2016], and throughout this time of preparation, I am praying each morning and using in my reflections the prayer diary of the Anglican mission agency, USPG (United Society Partners in the Gospel).

Pray for women around the world who carry the sole responsibility for feeding their families.