Remembering the dead on Remembrance Day 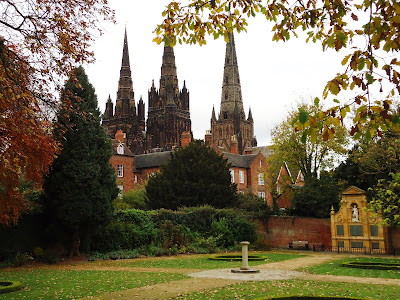 Remembrance Day is being marked this morning throughout these islands.

This morning, I remember my own grandfather, Stephen Edward Comerford, who suffered through Gallipoli and Suvla Bay with the Royal Dublin Fusiliers, was sent to the Balkan front, and then picked up malaria in Thessaloniki.

After my grandfather was sent back to Dublin, my father was conceived and was born in 1918.

But my grandfather’s health continued to decline, and he died a pitiable, sad and lonely death on 21 January 1921. He was only 53. He is buried in Saint Catherine’s Old Churchyard in Portrane, Co Dublin.

My two photographs this morning were taken in Lichfield during my visit last week.

The War Memorial Garden in Lichfield, in a quiet corner beside the Minster Pool and below Lichfield Cathedral was planned 1920 and laid out by Bridgeman and Son of Quonian’s Lane. The names of Lichfield’s dead of World War I are listed on two tiers of slate, while the niche has a statue of Saint George and the Dragon. The 19th century balustrade at the front is from Moxhull Hall near Sutton Coldfield, south of Lichfield. 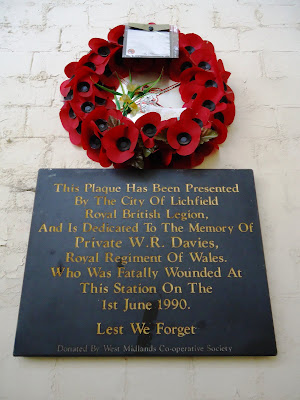 This morning, let us pray that we may find the ways needed to put all wars behind us, to put aside all hatred and violence, and when we remember that we remember with sorrow, with gratitude and with forgiveness, but without bitterness or anger, that the call of nationalist ideologies may never twist us, may never distort the love we should have for others, and nor ever allow us to deny our shared humanity.