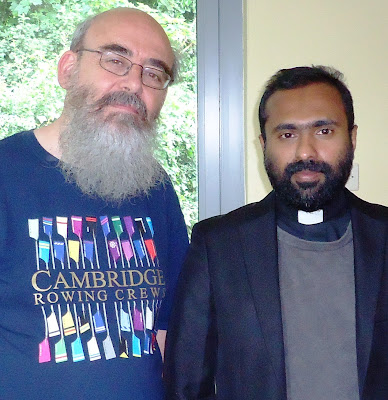 Father Koshy Vaidyan returned to India last year after completing his PhD in Liturgical Theology at Saint Patrick’s College, Maynooth, and he also has an MTh from Maynooth, For six years, from 2006 to 2012, he was the parish priest of Saint Thomas Indian Orthodox Parish in Dublin. The present parish priest is Father George Varghese.

The parish, uses Saint George’s and Saint Thomas’s Church in Cathal Brugha Street in Dublin’s City Centre, and I got to know many of the priests and members of the congregation through my work with the Discovery Service in the church.

The Indian Orthodox Church, or Malankara Church has its main numerical strength in the southern Indian state of Kerala. It is an ancient Church, tracing its origins back to AD 52, when the Apostle Thomas is said to have arrived in India.

The Church says it is modern in its vision and outlook, but keeps the traditional Oriental Orthodox faith, which accepts the first three Ecumenical Councils of the Church. It uses a translation of the liturgy adopted from the Church of Antioch.

Historically, this Church was part of the Church of the East, which was based in Persia and with great centres of learning in Edessa, Tigris and Selucia, and missions that reached as far as China. However, the liturgical rites are uniquely Indian, and today the Church uses the Malayalam, Syriac, Hindi, Kannada, German and English languages in the liturgy.

The Indian Orthodox diaspora in Ireland is scattered across the island, with parishes and congregations in Waterford, Cork, Sligo, Drogheda and Belfast (Northern Ireland).

From the 16th century, Portuguese Jesuits tried to bring the community fully into the Latin Rite of the Roman Catholic Church. But these efforts were seen as forceful and created such resentment that the majority of the community joined their archdeacon, Father Thomas, and 1653 they took an oath never to submit to the Portuguese.

The part of the church that supported Father Thomas is known as the Malankara Church. Following the arrival of Bishop Gregorios Abdul Jaleel of Jerusalem, Archdeacon Thomas forged a relationship with the Syriac Orthodox Church and gradually adopted West Syrian liturgy and practices.

Over time, however, relations became difficult between the Syriac Orthodox Patriarchs and the local hierarchy, particularly after Patriarch Ignatius Peter IV (1872-1894) began demanding registered deeds for the transfer of properties.

In 1912, a synod led by the Patriarch Ignatius Abdul Masih II, who had been deposed by the Ottoman government, consecrated Bishop Evanios as Catholicos of the East with the name of Baselios Paulose I.

The dioceses that supported Bishop Baselios Paulose became what is now the Malankara Orthodox Syrian Church, while those who supported the Patriarch became the Jacobite Syrian Christian Church.

The two groups were briefly reunited between 1958 and 1975, but attempts by church leaders and two Supreme Court decisions were unable to resolve the contention, and the two churches are independent of each other today.

Theologically and traditionally, the Indian Orthodox Church is part of the Oriental Orthodox communion of churches, and it shares the Alexandrian Christology of the the Coptic Orthodox Church in Egypt.

It was interesting to hear today that the Indian Orthodox Church regards Bishop Herbert Pakenham-Walsh (1871-1959) as a saint, and that his grave is a centre of pilgrimage. He was a missionary in Bangalore (1907-1908), was warden of Bishop Cotton Boys’ School in Bangalore (1907-1913), and the first Bishop of Assam (1915-1924). An ashram he was associated with is now a monastery of the Indian Orthodox Church.

Hopefully, the research by Father Koshy Vaidyan and John Mathew helps to promote even closer relations between the Indian Orthodox Church and the Church of Ireland.

Posted by Patrick Comerford at 19:25 No comments: