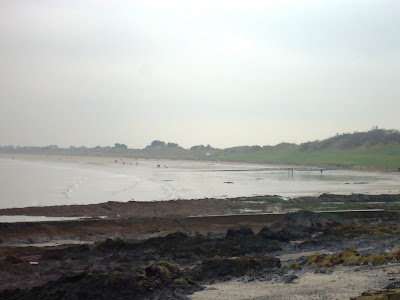 Looking through the haze and the mist towards the beach at Portmarnock from the Coast Road in Malahide this afternoon (Photograph: Patrick Comerford, 2013)

Two of us returned to Malahide this afternoon – a mobile phone had been left behind after lunch on Friday, but its recovery provided a good excuse for lunch again in the MU Gourmet Food Parlour on the Coast Road to Portmarnock.

On second thoughts, there’s no need to find a good excuse for having lunch again in the MU Gourmet Food Parlour – the place stands on its own merits.

Once again we had a table looking out over Malahide Estuary and Broadmeadow Water and the bay of across towards Lambay Island and Portrane. Once again it was a hazy, foggy, rainy day, but lunch was wonderful and afterwards we decided to take a short walk in the mist and the light drizzle above the shoreline towards Portmarnock. 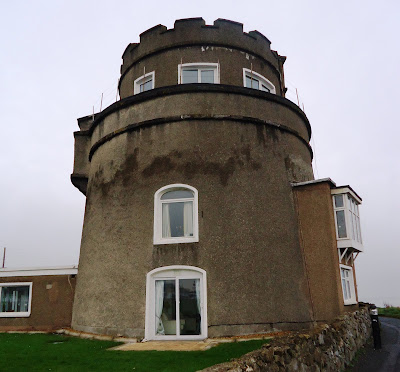 We walked as far as Carrick Hill Martello Tower, which was built around 1805 and is now a private family home.

Turning back, we returned to have another look at Robswalls Castle – the tower house that butts out onto the main road, and that once had its own small harbour hewn out of the rocks below.

I had written about the castle yesterday [Saturday] after Friday’s walk. Robswall Castle has seen no battles, and has seen no sieges. But I had missed out on how Robswall had been farmed by the Talbot family of Malahide Castle until the 1980s the castle had been the steward’s house.

While I was photographing the castle on Friday afternoon, I also missed out on the tiny latrine projection corbelled out high up between the main block and the stair turret on the south side. 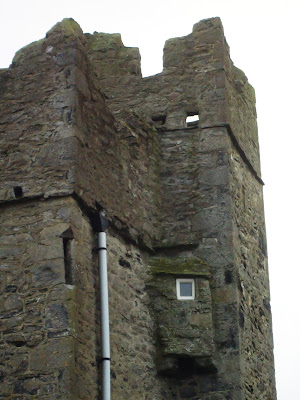 The projecting latrine high up on the tower of Robswalls Castle near the turret (Photograph: Patrick Comerford, 2013)

We drove back through Malahide and through Yellow Walls out to the north shoreline on the Broadmeadow Estuary, east of Swords. The tiny, narrow, potholed road was waterlogged and packed tight with just the few cars that had come with people delighted to feed the swans. 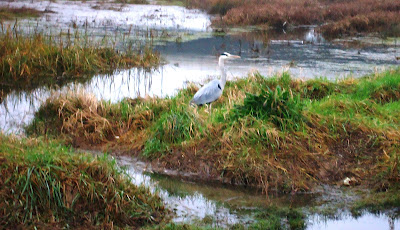 A lone heron in the marshland on the north shore of Broadmeadow Estuary this afternoon (Photograph: Patrick Comerford, 2013)

Rather than taking the treacherous coastroad on to Donabate, we decided to reverse. As we did there was a lone heron standing patiently in the marshland.

By the time we got to Portrane, darkness was closing in.