Could that be the Pope in Christ Church Cathedral? 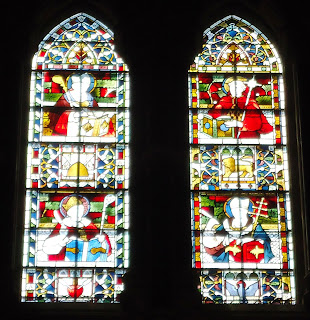 Sometimes, as a priest, it is just as important to be as it is to do.

Before this morning’s Sung Eucharist in Christ Church Cathedral, I stood outside the south porch for about half an hour, meeting and greeting people as they arrived in the warm sunshine.

I then joined the procession of choir and clergy, and was happy to take my seat in the chapter stalls, sitting behind the choir and alongside this morning’s preacher, Canon Mark Gardner, who is the canon-in-residence this week, during the Liturgy of the Word.

Later, at the offertory, I joined the other clergy in the sanctuary for the Liturgy of the Sacrament, sitting on the north side in one of the two sanctuary stalls that came to the cathedral from the former convent chapel of the Community of Saint John the Evangelist in Sandymount, one of only two Anglican women’s religious orders ever to have existed in the Church of Ireland.

At one stage, as my eyes drifted up to the clerestory apse on the south side of the chancel, I noticed two lancet windows with four images of patristic figures.

Could that be a Pope in Christ Church Cathedral?

The two windows, which come from the London studios of Clayton and Bell, who worked with many of the most prominent Gothic Revival architects in the second half of the 19th century.

Their windows in Lichfield Cathedral include the Great West Window (1869), the Jesse Tree in the window in the North Transept (1893), David and Goliath (1862), and Jesus with Lazarus; with Mary and Martha; and with Mary Magdalene (1873).

These two lancet windows in Christ Church Cathedral are by the Clayton and Bell studio in London and date from about 1878. Because of their position, they are almost impossible for the casual visitor to see. The four patristic figures in the pair of windows are Saint Ambrose of Milan, Saint Augustine, Saint Jerome and Saint Gregory.

I know of a carved statue of Saint Gregory on the south side of Lichfield Cathedral, where he stands in a centre of a group that includes Saint Augustine, Saint Jerome and Saint Ambrose to one side (to the viewer’s left), and Saint John Chrysostom, Saint Athanasius and Saint Basil (to the viewer’s right).

We were reminded by Mark in his sermon this morning both of the controversies created by the windows and the rood screen in Christ Church Cathedral in the 1870s, and that today is Saint Columba’s Day. But I could not help myself returning to Saint Gregory (ca 540-604), who was a contemporary of Saint Columba (521-597), and who came up for discussion twice in yesterday’s lectures during the Reader Course Day Conference.

Pope Gregory I is one of only two Popes – the other is Pope Leo I – to be given the popular title of “the Great.” Both served in the difficult times of the Barbarian invasions of Italy.

Saint Gregory, who was Pope from 590 until his death in 604, is a Doctor of the Church and one of the Latin Fathers. His lifestory bridges the gap between the fall of the Western Roman Empire and the end of the dark ages, between the Patristic period and the mediaeval church. His great concerns included reform and innovation in monasticism, pastoral care, ecclesial structures, liturgy and church music.

His ordering of the Church’s liturgy and chant has moulded the spirituality of the Western Church until the present day. He was a prolific writer and made exceptional efforts to revise the liturgy.

Gregory the Great is credited with re-energising the Church’s missionary work in northern Europe. In 596, he sent Saint Augustine on a mission to England. Saint Augustine is counted as the first Archbishop of Canterbury, while the historian the Venerable Bede has called Gregory the Apostle of the English.

A generation earlier, Saint Columba sailed from Ireland to Scotland in the year 563. From Iona, Christianity quickly spread throughout Scotland, and into northern England. 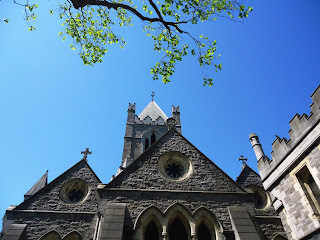 During the administration of Holy Communion this morning, the choir sang Benjamin Britten’s A Hymn of St Columba (Regis regum rectissimi, a short work commissioned for the 1400th anniversary of the voyage Saint Columba made from Ireland to the island of Iona. It was first performed outdoors in Churchill, Co Donegal, where Saint Columba was said to have preached but could not be heard because the wind was so strong.

The hymn is about the fire in Saint Columba’s belly for his missionary task, and the words are almost a variation on the Dies Irae. Benjamin Britten (1913-1976), whose 100th birthday is being celebrated later this year on 22 November, gave directions that it should be sung “with fire” which should underpin the interpretation.

Thunder shall rend that day apart,
Wonder amaze each fearful heart.
Anguish and pain and deep distress
Shall mark that day of bitterness.
King of kings and of lords most high.

That day the pangs of lust will cease,
Man’s questing heart shall be at peace;
Then shall the great no more contend
And worldly fame be at an end.

Today is anything but a “Day of shadows and cloudy dark.” The temperature had risen to the mid-20s by the time we left Christ Christ Church Cathedral and Saint Gregory’s window basking in the early afternoon sunshine. But we still prayed for the day when the

... questing heart shall be at peace;
Then shall the great no more contend
And worldly fame be at an end.

Posted by Patrick Comerford at 16:02 No comments: