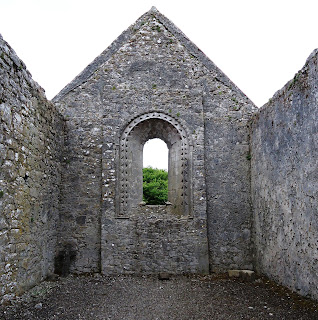 On the way back to Dublin from a funeral in Ballinrobe, Co Mayo, my eye was caught by a road-sign pointing to Eanach Dhúin on the eastern shores of Lough Corrib. No other sign gave a hint that this back road was leading to the ancient monastic site of Annaghdown, where the local community in this part of Co Galway struggled to maintain an independent diocese until well into the 16th century.

The evening was beginning to close in, rain was threatening, and there was still a long drive from Galway ahead of us. But this was one of the few cathedral sites in Ireland I had not yet visited, and the story of the claims of a tiny independent diocese and its cathedral made the short detour an inviting prospect.

Annaghdown, which is about 19 km north of Galway, takes its name from the Irish Eanach Dhúin (“the marsh of the fort”), and the ruins – at the end of a long twisting road, lined with thatched cottages – lie alongside Annaghdown Bay on the eastern shores of Lough Corrib.

According to tradition, Annaghdown was founded as a monastic site by in the 6th century when Saint Brendan of Clonfert – also known as Saint Brendan the Navigator – was granted the site by Áed mac Echach, King of Connacht. Saint Brendan is said to have died here in the year 577, but was buried at Saint Brendan’s Cathedral, Clonfert.

Was Annaghdown ever an independent diocese?

The earliest reliable reference to Annaghdown occurs in Comainmniguid Noem nErenn, composed ca 800, with a reference to Ciarán Enaigh Dúin, or Ciarán of Annaghdown. This may indicate a link with Saint Ciarán of Clonmacnoise rather than Saint Brendan of Clonfert.

However, the connection with Clonfert may have been no more than a reflection of an attempt by Clonfert to justify its claim on the church of Annaghdown at a later period. Indeed, we know little about the early history of Annaghdown, and it does not appear in the annals until the 12th century.

The Diocese of Annaghdown was not listed at either the Synod of Rathbreasail in 1111 or the Synod of Kells in 1152. Annaghdown may have been formed as a diocese in 1179 at the Synod of Clonfert, called by the papal legate, Archbishop Laurence O’Toole of Dublin, and it represtned the territory of O Flaherty clan in West Connacht. It continued to survive as a diocese for three of four centuries, mainly through the monastic outreach from Annaghdown Abbey.

The title Bishop of Annaghdown was used from about 1189, and several bishops were elected by the cathedral chapter until 1485.

Conn Ua Mellaig was Bishop of Annaghdown in 1189, when he attended the coronation of King Richard I of England on 17 September 1189. He died in office in 1202. His successor, Murchad Ua Flaithbertaig (O Flaherty), died in office in 1241. The next bishop, Tomas Ó Mellaig, may never have lived in Annaghdown, and appears to have worked as a suffragan bishop in Lincoln in 1246. He may have been deprived in 1247 and died in 1250.

His successor, Conchobar, was bishop in 1251. But, in 152 the Archbishop of Tuam petitioned the Henry III for the suppression of the diocese on his own doorstep, and from 1253 and 1306 Annaghdown was united to Tuam, although there were two bishops in this period. The first, Thomas, died around 1263. The second was John de Ufford, who had been Archdeacon of Annaghdown. He was elected in 1283 and went to Rome where he spent many years seeking confirmation of his election. But he was never consecrated a bishop and he resigned in 1289 in favour of Archbishop William de Bermingham, who promptly appointed him Archdeacon of Tuam.

Archbishop de Bermingham tried to force the Dean and Chapter of Annaghdown to resign, but in 1303 Dionysius, Dean of Annaghdown, travelled to Rome with a petition for the restoration of the diocese, its cathedral and the cathedral chapter. Three years later, Gilbert Ó Tigernaig, a Franciscan, was elected Bishop of Annaghdown. However, it appears he spent most of his time in office as a suffragan bishop in England in the dioceses of Hereford, Winchester and Worcester until he died in 1322.

In 1330, Tomás Ó Mellaig petitioned the Pope in Avignon to recognise him as Bishop of Annaghdown. Although his appeal fell on deaf ears, a full cathedral establishment was maintained, with a dean, archdeacon, canons and vicars choral. However, it seems that from the mid-14th century it seems Bishops of Annaghdown were appointed to serve as suffragan bishops in England, mainly in the dioceses of Bath and Wells, Exeter, Hereford, Lincoln, Salisbury, Winchester, York.

Thomas Barrett was appointed Bishop of Annaghdown by the Pope in 1458, although the see had been held since 1450 by Donatus Ó Muireadhaigh as Archbishop of Tuam. Once again, Barrett spent most of his time in England as a suffragan bishop in Exeter and Bath and Wells. In 1484, King Richard III sent him to Ireland on a diplomatic mission to Ireland, although he failed to reconcile Maurice FitzGerald, 9th Earl of Desmond, with the crown.

When Barrett died and the Wardenship of Galway was created in 1485, the Diocese of Annaghdown was formally united with Tuam by Papal decree once again, and some of its parishes, including Claregalway, Moycullen and Shrule, along with Oranmore and Maree, Oughterard, Rahoon and Skryne, were attached to the new wardenship.

However, the title of Bishop of Annaghdown continued. Francois Brunand, a Carmelite friar, became Bishop of Annaghdown ca 1494-1496, but acted as a suffragan bishop in Geneva until he died ca 1504. The title was then dormant until John O’More or O’Moore became bishop around 1539. He was jailed for accepting his appointment from the pope, although there was no record of a papal provision. He was released in 1540 and then appears to have been recognised by the Crown. He died ca 1553, and was the last diocesan Bishop of Annaghdown. Two years later, Annaghdown was united to Tuam once again and for the last time, although the union of the two was not finally accepted until 1580. 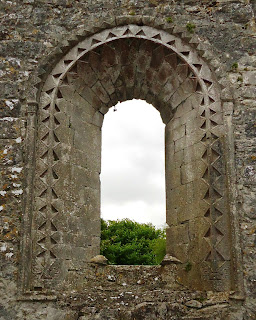 On Sunday afternoon [26 May 2013], I tramped through the long, wet grass in Annaghdown churchyard to visit the remaining ruins of Saint Brendan’s Cathedral, mostly dating from the 15th century, but said to be built on the site of a church burned down in the 12th century. It may be the church that was built by Áedh Ó Flaithbheartaigh (Hugh O’Flaherty) in 1410.

This plain, drab cathedral is now roofless, and is entered through a door in the south wall. The building is a barn-like structure, with a small, square bell turret at the top of the west gable. The north wall has two large, plain, pointed arch windows without tracery. The cathedral also had a chancel arch, but only the outline of this can be seen on the walls.

The one striking feature in the ruined building is the intricately designed East Window, which alone makes the cathedral worth visiting. This East Window, which dates from the 12th century and may have been saved from an earlier building or moved from another church building on the same site, perhaps the neighbouring Augustinian Priory.

The window is carved in blue-grey limestone, with chevrons biting into the long body of a monster. The monster’s hind legs provide the base of the south-side jamb, while the monster’s head on the north-side jamb devours a bundle of serpents.

The church continued to be used by the Church of Ireland as a parish church until at least the 18th century.

A round tower may have stood at Annaghdown until the early 13th century, but if it did there was no trace of by the late second half of the 19th century. Today, the site includes the ruined cathedral, the Abbey of Saint John the Baptist de Cella Parva, the College of Saint Brendan, the ruins of an Augustinian priory, holy wells named after Saint Brendan and Saint Cormac, and a ruined castle.

The oldest building on the site, known as the ‘Nunnery,’ is to the north of the cathedral ruins, and probably dates from the 11th or 12th century.

Further to the north are the remains of nave, chancel and some section of the walls of the church attached to the Premonstatensian Abbey of Saint John the Baptist de Cella Parva. It was founded as priory in 1223, and became an abbey in 1236. The first abbot, Thomas O’Malley, is said to have been the son of a bishop and a nun, and became Bishop of Annaghdown (1242-1250). The abbey survived until 1542 and the dissolution of the monastic houses.

Nearby stands the ruined Annaghdown Abbey or Priory, founded as the Abbey of Saint Mary de Portu Patrum, probably by Turlough O Conor, King of Connacht, ca 1140, at the insitence of Archbishop Malachy of Armagh. The remaining ruins include a church, a cloister and living quarters. The remaining details of the windows suggest that they were built in the 13th century and the south window of the choir seems to date from ca 1200.

Restoring a castle, reviving a title

As I left Annaghdown on Sunday evening, the lights were fading and the camera in my battery had died. I nodded a polite farewell to a few local people who were tending family graves. Today, Annaghdown is no longer a living ecclesiastical site and its only significance is to found among the dead.

I never got to see Annaghdown Castle, a nearby tower house built on the eastern shores of Lough Corrib by the O’Flaherty family in the late 14th century – although other authorities say it was built in 1421 by the Archbishop of Tuam. It stands 200 metres south of the priory, and was once owned by the redoubtable Lady (Molly) Cusack-Smith (11906-1998) of the Galway Blazers. She sold the castle for £2,000 to Ray Cook of Galway, who restored it in recent decades.

Meanwhile, the title of Bishop of Annaghdown was revived as a titular title in the Roman Catholic Church as Bishop of Eanach Dúin in 1970. That title is currently held by Bishop Octavio Cisneros, an Auxiliary Bishop of New York, since 2006.

The one county of Galway has seven cathedrals: four in the Church of Ireland – Annaghdown, Clonfert, Kilmacduagh and Tuam, and three more in the Roman Catholic Church– Galway, Loughrea and Tuam. It is strange then to think that the Church of Ireland has never had a resident bishop in Galway, and never seized the opportunity after the suppression of the Wardenship of Galway to create a consolidated Diocese of Galway.