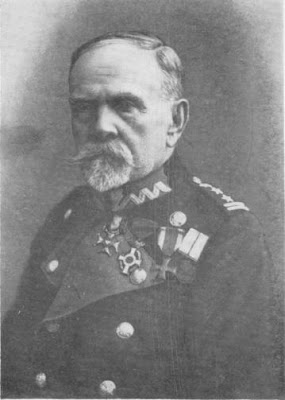 Zygmunt Mineyko, the Polish aristocrat who was the father-in-law, grandfather and great-grandfather of three Greek Prime Ministers

I should be in Warsaw today on a three-day visit to the Polish capital. This would have been my second visit to Poland, following a city break in Kraków and Auschitz at the end of 2016. But the ‘Beast from the East’ and ‘Storm Emma’ made a motorway journey to the airport too risky yesterday afternoon, and Warsaw has gone onto my wish list.

Despite the interesting Polish presence here, we are more likely to know about Spain, France, Italy and Greece.

How many of us can count famous or historical Polish figures on the fingers of two hands, or even one hand?

But who remembers that the broadcaster Jacob Bronowski (1908-1974), the Warner Brothers or the pianist Arthur Rubinstein (1887-1982) were Poles too? Or Menachem Begin, David Ben-Gurion and Zbigniew Brzeziński (1928–2017), Jimmy Carter’s national security adviser? And few Irish people probably know about the Baal Shem Tov, the mystical rabbi who is regarded as the founder of Hasidic Judaism.

I was mistaken when I thought the painter Marc Chagall was Polish. But perhaps Irish people might add the Polish playwright and painter Casimir Dunin Markievicz (1874-1932), who styled himself Count Markievicz and was the husband of Constance Markievicz – he moved to Ukraine in 1913, and died in Warsaw in 1932. 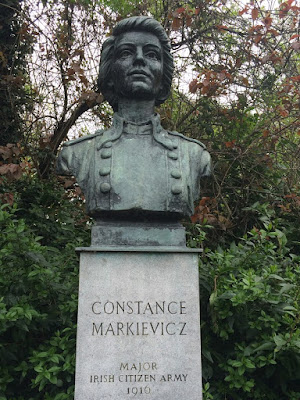 Constance Markievicz … her husband claimed he was a Polish count (Photograph: Patrick Comerford, 2016)

I think, perhaps, that Greek people are more conscious of the links Poland and Greece share than people in Ireland are aware of the two-way links between Poland and Ireland.

One of the best-known Poles in modern Greek history and politics was Zygmunt Mineyko (Ζίγκμουντ Μινέικο), a Polish aristocrat who was the father-in-law, grandfather and great-grandfather of three Greek Prime Ministers.

Zygmunt Mineyko (1840-1925) was born into a prominent aristocratic Polish-Lithuanian, land-owning family. One of his ancestors was a signatory of the Union of Horodło in 1413, and the family owned many estates in what are now Poland and Belarus.

Mineyko enrolled in a Russian military academy in Saint Petersburg in 1858, but he returned home in 1861 to spread anti-Russian agitation among the Polish and Belarusian population. He then escaped to Italy, where he taught at a military school in Genoa established by Garibaldi, but he returned home when an uprising against the Russian Empire began in 1863.

Mineyko was arrested and sentenced to death, but he escaped the death penalty and was sent into exile in Siberia. He escaped on an English ship in 1866 using the alias of Count von Meberthe. In Paris, he met Napoleon III, secured the release of French prisoners in Siberia when the Tsar Alexander II visited France in 1868, and went on to study at the École Militaire in Paris.

With a degree in civil engineering, Mineyko worked briefly in Morocco before moving to the Ottoman Empire, where he worked on building railways, bridges and channels in Bulgaria, Turkey and in Epirus and Thessaly, then Ottoman provinces that were later incorporated into the modern Greek state. During this time, he made a sensational archaeological discovery at the ancient sanctuary of Zeus in Dodona, and established close links with the Greek intelligentsia.

In 1880, Mineyko married Persephone Manaris, the daughter of a renowned Greek mathematician Spyridon Manaris of Ioannina, once the seat of the formidable Ali Pasha (1740-1822). The family moved to Athens when Mineyko was appointed chief engineer in the Greek Ministry of Public Works in 1891. He was also a member of the executive committee for Crete in 1896, and in 1897 he was appointed head of the topographic section of the Greek Army’s general staff.

The Panathenaic Stadium in Athens … Zygmunt Mineyko played a key role in rebuilding the stadium for the 1896 Olympics (Photograph: Patrick Comerford, 2017)

Mineyko took part in the revival of the modern Olympic Games, and was involved in restoring the Panathenaic Stadium in Athens, the venue for the first modern Olympics in 1896. During the Games, he reported from the stadium for the Polish newspaper Czas, and for many years he wrote on Greek politics for Polish periodicals in Kraków and Lwow.

Mineyko took part in the Greek-Turkish war in 1897. In 1910, he was granted honorary citizenship by the Greek Parliament. Despite his age, at 72 he took part in the First Balkan War, which began in 1912. His strategic plans were crucial in the decisive Greek victory at the battle of Bizani in 1913, leading to the Greek capture of Ioannina, his wife’s home town, and Epirus.

Politically active, he was a strong supporter of the Greek Prime Minister Eleftherios Venizelos, founder of the Greek Liberal Party, who was the key figure in the unification of Greece in 1913.

A heart attack forced Mineyko’s resignation in 1917. After Poland regained independence in 1918, he helped establish diplomatic relations between Greece and Poland, and convinced Venizelos to support the Polish cause in the international arena.

In 1922, Mineyko visited his homeland which had become a part of the Second Polish Republic. There he was made an honorary colonel and received an honorary doctorate. When his wife Persephone Manaris learned about the rise of a newly-independent Poland, she began to sell her property and planned to move to Kraków. But her dream never saw the light of day: Zygmunt Mineyko died in Athens on 27 December 1925.

Mineyko’s memoirs are held in the Library of the Jagiellonian University in Kraków, and his memoirs were published in Polish in Warsaw in 1971.

Zygmunt Mineyko and Persephone Manaris were the parents of two sons and five daughters. One of their daughters, Sophia, married Georgios Papandreou (1888-1968), the Governor of Chios who became the political heir of Venizelos and was Prime Minister of Greece of Greece of three occasions (1944-1945, 1963, 1964-1965). He was ousted from office in the colonels’ coup in 1966 and was held under house arrest. He is often referred to affectionately in Greece as Γερος της Δημοκρατιας (Geros tis Demokratias), ‘the old man of the Republic’ or the ‘grandfather of democracy.’

Andreas Papandreou visited General Wojciech Jaruzelski in Poland in 1984. There, it is said, he was told that Balvanishki, his grandfather’s home village in Soviet Belarus, no longer existed. In fact, the name of the village had been changed to Zyalyony Bor during the Khrushchev era.

In a poll conducted by the Greek newspaper Kathimerini in 2007, the first four years of Papandreou’s government were voted the best government Greece has ever had.

Andreas Papandreou’s son and Zygmunt Mineyko’s great-grandson, George Papandreou, who was born in 1952, became the third member of the Papandreou family to become Prime Minister of Greece (2009-2011). His brother is the writer Nick Papandreou, a former economist at the World Bank.

Both Nick Papandreou and I were visiting lecturers at the seminar ‘The Emergence of Modern Greece,’ organised by the Durrell School in Corfu in May 2006. I remember how, on the occasion too, a planned journey was also cancelled, when unusual weather for early summer forced the organisers to call off the ten-minute boat trip to the tiny island of Vidos for the closing dinner. 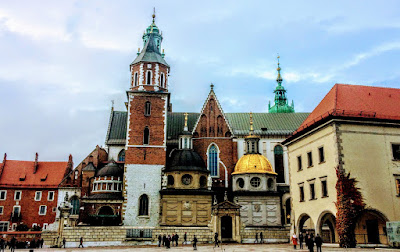 The Cathedral in Kraków … Zygmunt Mineyko’s wife Persephone planned to move to Kraków and his papers are held in the Library of the Jagiellonian University (Photograph: Patrick Comerford, 2016) 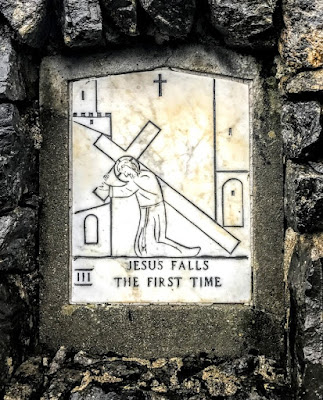 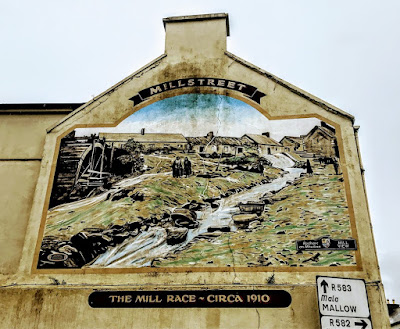