Johnstown: a Georgian
town in Kilkenny has been
bypassed but not forgotten

Johnstown village in Co Kilkenny was planned by the Hely family in the 18th century (Photograph: Patrick Comerford, 2021)

In my childhood days, the village of Johnstown in Co Kilkenny was a stopping point on the road journey between Cappoquin, Co Waterford, and Dublin. As children, we thought it was unique as a small village with such broad streets, a square and a tall church tower. But it must have been a stopping point for many other families too, halfway way between Cork (130 km) and Dublin (120 km).

Johnstown stands at the crossroads of the R639, the R502 and the R435 regional roads. But it is now longer familiar to families and so many motorists since it was by-passed by the M8 in December 2008.

During this year’s summer ‘road trip’ two of us returned to Johnstown, to see its broad streets, its square and the parish church, known as Saint Mary’s Church, Fertagh, with its landmark tower.

Johnstown is in the Barony of Galmoy, which takes its name from the River Goul. The village of Johnstown was first laid out in the early 1700s by either Sir John Hely (ca 1650-1701) of Foulkscourt Castle or his eldest son, George Hely of Foulkscourt House.

Sir John Hely, who gave his name to Johnstown, obtained a grant of the old estate of the Purcell family at Foulkscourt in 1697. He had become Chief Justice of the Irish Common Pleas in 1695, and he acted as Speaker of the Irish House of Lords in 1696-1697.

The planned village was developed in 1770 by John Hely of Foulkscourt, who was inspired by his estate village at Winterbourne Stoke in Wiltshire. The square became the nucleus of the village, with three houses in each quadrant, or 12 in all. The village developed and expanded from this square. 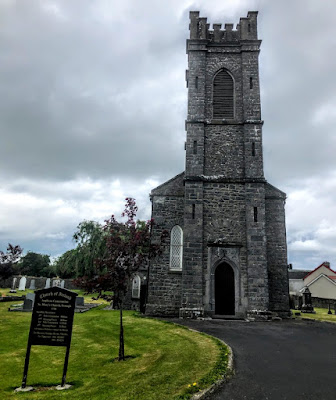 Saint Mary’s Church, Fertagh, perpetuates the memory of the parish of Fertagh dating back to the sixth century (Photograph: Patrick Comerford, 2021)

For many years, the Irish name of Johnstown was rendered as Cuirt a’ Phuca, meaning ‘the Haunted Court.’ But the legend of a ‘Pooka’ or ghost arose from a misinterpretation of the Gaelic name for Foulkscourt, Cuirt Phuco.

Saint Mary’s Church, Fertagh, perpetuates the memory of the parish of Fertagh, which dates back to perhaps the sixth century. The old Irish name of Fertagh was Fertae Caerach, which may mean ‘Circular Grave,’ and the name was retained through the centuries.

The tower of Fertagh was said to have been built by a mythical character known as the Goban Saor. But rhe area has long been associated with Saint Ciarán, the patron saint of the Diocese of Ossory, who is said to have lived in the locality and to have watered his cow at Tobar an Phuicin. A pattern was once held in the area on Saint Ciarán’s Day, 5 March. Kieran’s Road ran from Fertagh Church by the old churches at Borrismore and at Rathealy to Callan.

The early Celtic Church and the mediaeval priory at Fertagh were both dedicated to Saint Ciarán. The tower and an old wall dated from the 10th century. The limestone tower is 100 ft high and 50 ft in diameter at base.

Grangefertagh, a sixth century round tower 3.5 km north-east of Johnstown, is associated with Saint Ciarán of Saigir and was attacked by the Vikings in 865. A Viking Age brooch found in Ballyspellan in 1806 is now in the National Museum of Ireland.

The tower at Fertagh is said to have been attacked and burned in 1136 by Muirceartach O Loughlin of the Northern Ui Neill, who plundered and burned the churches of Upper Ossory. The chief master of Fearta, Eochaidh O Cuinn, fled to the tower with the community and church valuables, but the door was forced and the occupants and contents of the tower were destroyed by fire. 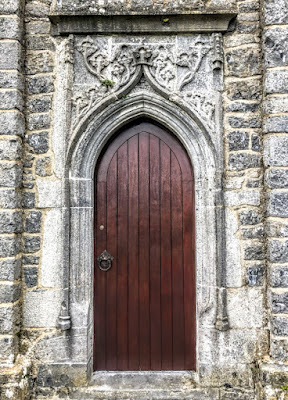 The ornamental entrance doorway was moved from the earlier church to Saint Mary’s Church in 1799 (Photograph: Patrick Comerford, 2021)

During the Anglo-Norman reforms of the Church in the 13th century, the Blanchfield family founded at a priory dedicated to Saint Kieran at Fertagh for the Regular Canons of Saint Augustine.

Royal letters in 1251 granted protection to the Prior and Canons of Fertakeragh and Ackidm Acarth (Aghmacart). The rectories of Fartagh and Donoughmore were appropriated to the priory, which had an estate of about 1,000 acres, including a grange or farmhouse by the River Goul.

At the suppression of the monasteries in 1540, the Prior of Fertagh, Robert Shortall, was given a pension of five marks. In 1567, the priory and its lands were granted to a branch of the Ormond Butlers.

The Church of Ireland parish continued to use the church of Fertagh from the Reformation until 1731, when the church was repaired and rebuilt as a parish church.

The church roof collapsed in 1780 and the church was abandoned. The ornamental entrance doorway of the west gable and the perpendicular style tracery East Window were moved to Saint Mary’s Church, Fertagh, in 1799. A small tracery window from the north wall and a carved polygonal baptismal font were later moved to Johnstown Roman Catholic church. 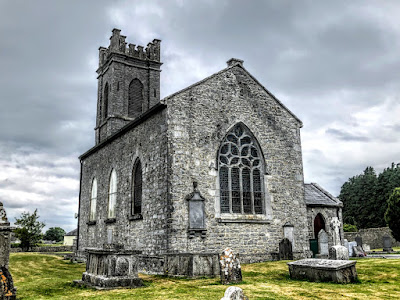 Saint Mary’s Church, Fertagh, is a well-composed modest-scale church with the standard arrangement of a nave that are typical of churches sponsored by the Board of First Fruits. The church tower and parapet stand out against the skyline.

The cut-stone dressings include a finely-carved doorcase of mediaeval provenance, and it is said the decorative East Window was salvaged from the earlier, mediaeval Fertagh Church.

This is a three-bay, double-height church built by the Board of First Fruits between 1796/1799 and 1801. It has a single-bay, single-storey vestry at the north-east, and a single-bay, three-stage entrance tower with a parapet at the west end.

The pitched slate roofs have clay ridge tiles, there is cut-limestone coping and cast-iron rainwater goods on squared rubble stone eaves. The random rubble stone walls may have been rendered originally rendered.

The squared rubble stone advanced corner piers on the tower have square-headed slit-style blind apertures, there are cut-limestone stringcourses at each stage on the tower, and the rendered battlemented parapet on a moulded cornice has stepped corner pinnacles and cut-limestone coping.

The pointed-arch windows are blind on the north side. They have cut-limestone sills, squared limestone voussoirs, Y-mullions in the nave forming a bipartite pointed-arch arrangement.

The East Window, with cut-limestone dressings, is said to have been salvaged from the mediaeval church of Fertagh. It has Y-mullions forming a four-part elliptical-headed arrangement with decorative overlights to the arch that have hood moulding over supporting squared limestone voussoirs.

The church is well maintained outside and inside, with stained-glass windows of artistic importance and a timber gallery at the west end. The surrounding churchyard has an array of gravestones with high quality stone masonry.

The other interesting antiquity at Fertagh is Kilpatrick’s Chapel, founded in the 15th century by the Mac Giolla Padraig alias FitzPatrick alias Kilpatrick, of Upper Ossory, to house the ‘Kilpatrick Tomb.’ 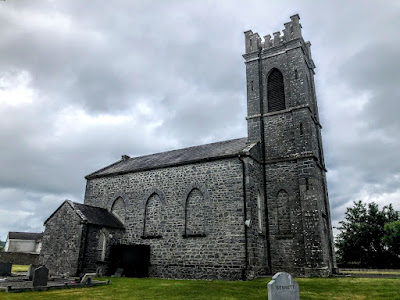 The pointed-arch windows are blind on the north side (Photograph: Patrick Comerford, 2021)

Soon after Johnstown had been laid out, its reputation grew in the early 18th century with the popularity of the mineral spa at Ballyspellan Spa Well. When Thomas Sheridan and Jonathan Swift visited the spa in 1728, Sheridan wrote a poem praising the medicinal qualities of the spa.

All you that wou’d refind your Blood
As pure as fam’d Llewellyn
By Waters clear, come ev’ry Year
To drink at Ballyspellan

Tho’ Pox or Itch, your Skins enrich
With Rubies past and telling,
T’will clear your skin before you’ve been
A month at Ballyspellan …

If dropsy fills you to the Gills
From Chin to Toe tho’ swelling
Pour in, pour out, you cannot doubt
A Cure at Ballyspellan.

Swift penned a retort that read, in part:

Dare you dispute,
You Sawcy Brute,
And think there’s no rebelling
Your scurvey Lays,
And senseless praise,
You give to Ballyspellan.

Howe’er you bounce,
I here pronounce
Your Med’cine is repelling
Your water’s mud
And sowrs the Blood
When drank at Ballyspellan.

Ballyspellan Spa is no more but the water that made it famous still flows into the well house at Ballyspellan.

Johnstown has been bypassed by the M8 since 2008 (Photograph: Patrick Comerford, 2021) 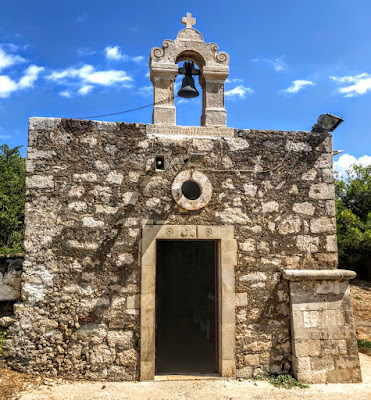 Saint Catherine’s is a small church in the Fortezza in Rethymnon (Photograph: Patrick Comerford, 2021)

My photographs this morning (6 October 2021) are from Saint Catherine’s Church, one of two surviving small churches in the Fortezza in Rethymnon. 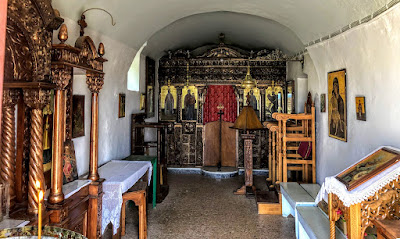 Inside Saint Catherine’s Church in the Fortezza in Rethymnon (Photograph: Patrick Comerford, 2021)

The Fortezza was founded on 13 September 1573, based on designs by the Italian engineer Sforza Pallavicini, and it was completed in the 1580. The original Venetian plan envisaged moving the entire city permanently into the new fortress. However, the city’s residents were unwilling to move, and the space was inadequate. Finally, only the Venetian administration and guard settled there.

The Fortezza was surrendered to the Ottomans in 1646, and in the decades that followed the form of the Fortezza did not change significantly, apart from minor extensions and additions, and the number of residents increased.

During the German occupation of Crete in World War II, the German garrison settled in the Fortezza and turned some of the buildings into prisons and dormitories. After the Germans left, the residents gradually started moving from the Fortezza and down into the town below.

Saint Catherine’s Church lies immediately south of the former Episcopal Residence, which is beside the Sultan Ibrahim Khan Mosque, first built as Saint Nicholas Cathedral. The church is a small, single-aisle, barrel-vaulted church, with a simple, wooden iconostasis or icon scree. It was built in the 19th century over a cistern, and was refurbished in 1985. 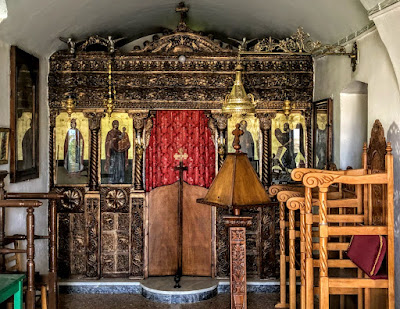 1 [Jesus] was praying in a certain place, and after he had finished, one of his disciples said to him, ‘Lord, teach us to pray, as John taught his disciples.’ 2 He said to them, ‘When you pray, say: 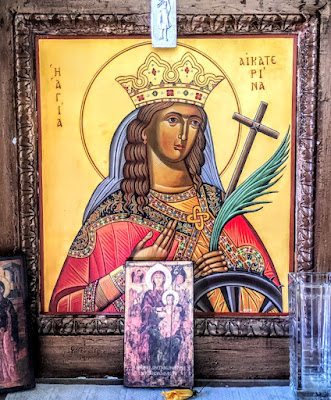 The Prayer in the USPG Prayer Diary today (6 October 2021) invites us to pray:

We pray for the Save Our Schools network and the work they do to bring human rights issues in the Philippines to light. 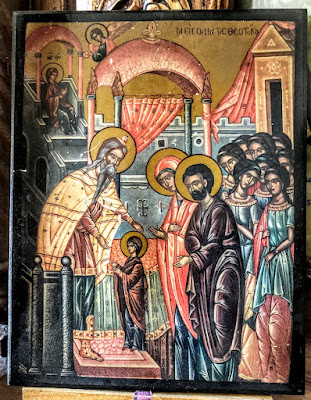 An icon of the Presentation of the Theotokos or the Virgin Mary in Saint Catherine’s Church (Photograph: Patrick Comerford, 2021) 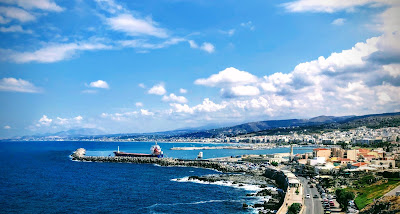 The Fortezza towers above the city and harbour of Rethymnon (Photograph: Patrick Comerford, 2021)