‘Hope of future glory’ in the ‘Quilt of Hope’ 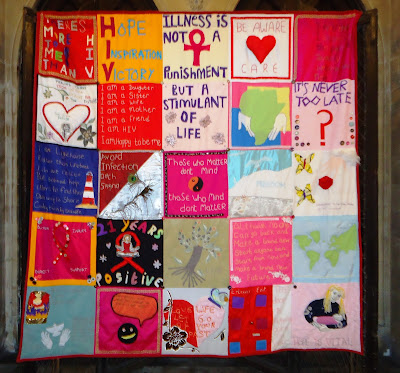 The Quilt of Hope at the West Door of Christ Church Cathedral, Dublin (Photograph: Patrick Comerford, 2013)

I was in Christ Church Cathedral, Dublin, this morning, meeting and greeting people at the door of the south porch before taking my stall for the Cathedral Eucharist.

The celebrant was the Revd Robert Lawson, and the preacher was the Precentor, Canon Peter Campion.

This morning’s setting was William Byrd’s Mass for Four Voices and the Communion Motet was O sacrum convivium, a setting by Thomas Tallis of a Latin text written by Saint Thomas Aquinas:

O sacred banquet, wherein Christ is offered up.
We recall the memory of his passion,
our souls are filled with grace,
and hope of future glory is given us.

Turning to walk back down the cathedral with the choir and clergy, I was struck by the “hope of future glory” in the bright and delightful colours in the Quilt of Hope, hanging on the West Door of the Cathedral.

The Quilt of Hope was launched on Friday 14 June to support the Women’s Group of Open Heart House as part of the events marking Irish AIDS Day last Sunday [16 June 2013]. Open Heart House is an innovative and diverse project that challenges the social stigma and the associated isolation of living with HIV+. It is Ireland’s biggest peer support network of HIV+ people.

Open Heart House facilitates a space for HIV+ women to meet, to talk about the challenges they face in life, their partners, their children, their successes, their failures and fears, their deepest emotions and hopes, and to offer strength and support to each other.

Too many people associate HIV+ and AIDS solely with developing countries. However, it is a global issue that can affect anyone, anywhere.

I wonder why HIV seems to have slipped off the agenda in Ireland. It is no longer a major media topic or a topic for public conversation. Yet it is estimated that HIV affects 6,629 people and their families in Ireland, and it is still a frightening reality for many people.

The Quilt of Hope was created by women from Open Heart House as a positive representation of women living with HIV+ in Ireland and to highlight and overcome the issues that women experience living HIV+ and AIDS.

The idea for the quilt arose in conversation among the women, who were inspired by the AIDS Memorial Quilt of 1987, which was exhibited in the Mansion House in Dublin in 1991.

Their dream is that this quilt should travel around the world, reminding society that there is life after an HIV+ diagnosis. They hope that when HIV+ women see this quilt they will add their stories and their dreams.

Open Heart House is at: http://www.openhearthouse.ie/

Posted by Patrick Comerford at 15:15 No comments: