At the beginning of the 19th century, Limerick’s status as a prosperous mercantile and trading port gave rise to the foundation of many banks over 200 years ago. Today, although there are some remaining hints of these banks scattered through the city, the one significant remaining legacy from that period is building that once housed a bank set up to deal with the collapse of the earlier mercantile banks in the immediate aftermath of the Battle of Waterloo.

The Sarsfield Credit Union in Glentworth Street was originally built as the Limerick Savings Bank. This temple-like building was designed by Sir Thomas Deane and superintended by the Limerick-based engineer William Henshaw Owen, who was responsible too for designing Matthew Bridge over the Abbey River.

This building is enhanced by its podium on this corner site. Although it has lost all its internal features, the adjacent building retains some joinery and plasterwork.

This building was designed like a Greek temple, with a Doric portico and blank side walls and standing on a platform. Sadly, it does not take full advantage of its corner site, and while it is a distinguished building and it forms a focal point on this streetscape, it is difficult to appreciate the full extent of its design because of the way the corner site has been utilised.

In its design, this is an archaeologically-correct Greek revival temple bank building. The unexpected and delightful details include the carved lions’ heads anthemions above the eaves. It is similar to Owen’s National Roman Museum at Caerleon, near Newport in south Wales – it must have surprised Victorians that a Roman museum was designed to look like a Greek temple.

Beside the bank, the adjacent three-bay two-storey rendered building, with its subtle Greek-inspired lugged door architrave, adds significantly to the architectural context of the bank temple.

The building, designed like prostyle tetrastyle limestone Doric temple, was built in 1839, on a stylobate and raised rusticated podium. Four fluted Doric columns rise from a three-step stylobate and support a plain architrave and frieze with triglyphs and guttae. There are mutules with guttae beneath the cornice to three sides, forming the base of the pediment above. The pediment has an acroterion and a pair of acroteria angularia.

The Egyptian-style central door opening has an architrave surround and double-leaf timber-panelled doors. To the rear is a pair of round-arched window openings. These were once double-height, but they are now filled at mezzanine level to form four openings with uPVC windows.

Set back to the east is a four-bay two-storey over concealed basement building built ca 1830, attached and unified with the bank.

The bank hall was gutted and renovated around 1990 and none of the original interior features have survived from that time, apart from the ceiling plaster cornices, the original doorcases and window surrounds.

The architect Sir Thomas Deane (1792-1871) was born in Cork, the eldest son of Alexander Deane and his wife Elizabeth Sharpe Deane. His father died in 1806, and he was already listed as an architect in Cork in 1809-1810. In 1811, he won his first architectural competition with a design for the Commercial Buildings on the South Mall, Cork.

Government building contracts were an important source of his income until the mid-1840s. In 1845, he was appointed architect for the new Queen’s College in Cork, and the following year he engaged Benjamin Woodward as his assistant.

Thomas Deane played an important part in the life of Cork. He was a member Cork Corporation for many years and the city sheriff in 1815 and 1830, when he was knighted by the Lord Lieutenant, the Duke of Northumberland. He was elected high sheriff in 1852. Deane’s Tory politics affected the list of his clientele, and Whig supporters in Munster tended to give their patronage to the Limerick-based brothers James and George Richard Pain.

In 1851, Deane took his assistant Benjamin Woodward and his son, Thomas Newenham Deane, into partnership. The works of Deane and Woodward included the Museum at Trinity College Dublin. In 1866, Deane was elected president of the Royal Hibernian Academy, and in 1868 he was elected president of the Royal Institute of Architects of Ireland. He died aged 79 at his house in Longford Terrace, Monkstown, Co Dublin, on 2 October 1871.

The engineer and architect William Henshaw Owen (1813-1853) was born in Wales and began his career in Ireland with the Board of Works. He began working in Limerick in 1836, and oversaw the building of Thomond Bridge (1836-1840) to designs by James Pain and George Richard Pain and the Savings Bank in Glentworth Street. He also designed the Mathew Bridge (1844-1846).

William Owen lived in Thomas Street and later in Mallow Street, Limerick. He died suddenly in San Francisco on 1 June 1853. 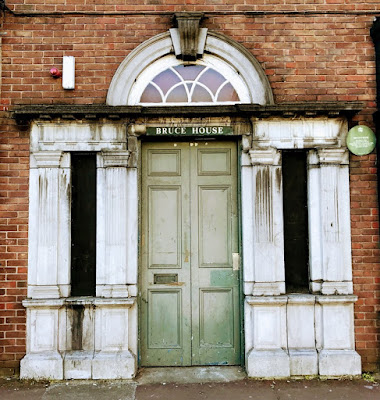 The glorious exterior of the former Savings Bank, despite the fate of its interior, is in sharp contrast to the sad state of the façade of the former Bruce’s Bank at 6 Rutland Street.

This bank was founded in 1806 by George Evans Bruce, who lived at the Hermitage, Castleconnell, and who was High Sheriff of Co Limerick in 1800. The bank closed after financial difficulties in 1820.

Despite the weeds and the derelict house, the doorway offers an insight into Limerick’s prosperous banking sector two centuries ago.

Other banks in Limerick in the early 19th century included Maunsell’s Bank, popularly known as the ‘Bank of Limerick,’ at No 6 Bank Place, and Roches’ Bank at 96 George’s Street (now O’Connell Street).

After the Battle of Waterloo, there was a steady falling off in trade through Limerick Port, and the local merchants and traders were left in such a sorry state that many of the privately-owned banks collapsed in 1820.

Following the collapse of these private banks, a group of prominent businessmen met in a backroom in George’s Street and agreed to forming the Savings Bank. The principal founding figure was John Norris Russell, who chaired a meeting of trustees in April 1820.

The founding principles insisted: ‘The Limerick Savings Bank has been formed for the safe custody and increase of small savings belonging to the Trades People, Mechanics, Servants, Labourers, and other Industrious Persons of either sex, for such sums as they may wish to deposit, in conformity to the provisions of these Rules.’

In time, the new bank moved to larger premises in Upper Cecil Street, and the Earl of Limerick subsequently offered the site for the new building that still stands on Glentworth Street. It was threatend with demolition in the second half of the 20th century, but survioved as the Permanent TSB Bank, and is now the head office of the Sarsfield Credit Union.

A picture postcard corner of
Rathkeale is on the market 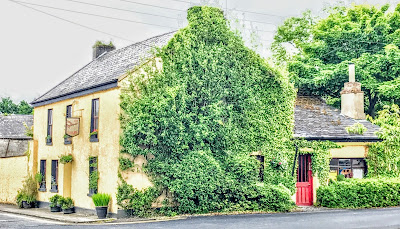 An Seabhac … a pretty corner of Rathkeale that may date back 400 years (Photograph: Patrick Comerford, 2017; click on image for full-screen view)

On a bright May morning, there are corners of Rathkeale that look like picture postcards or scenes from a chocolate box cover.

The Wine Bar, also known as An Seabhac stands on a street corner on Church Street, just below Holy Trinity Church and close to the banks of the River Deel. It has been closed for some years now, but many remember this place as one of the most celebrated restaurants in West Limerick.

‘An Seabhac’ is the Irish for ‘The Hawk,’ and was the name given to this wine bar which became legendary for its food and its music.

An Seabhac is designated as a ‘protected structure’ under section 51 of the Planning and Development Acts 2000-2011, and two years ago the Tidy Towns report said An Seabhac is ‘eye-catching … nicely painted and full of colour – ivy, hanging baskets and window boxes.’

However, a recent development plan suggested its demolition and setting back the roadside wall onto Church Street to achieve ‘adequate sightlines.’

This detached, two-storey public house, built ca 1820, although some accounts say it may be up to 400 years old. The house was once part of a barracks and cannon portholes can still be seen in the garden walls. The house a pitched slate roof and rendered chimneystacks, rendered walls, and square-headed openings with timber sash windows.

Some years ago, the house was feted in an American magazine feature by the writer Carleton Varney, who recalled that in 1903, the home became part living space for the family and part pub for people who enjoyed folk music, literature, poetry and happy times.

He claimed the home of Ann and Gerald Fennell goes back some 400 years, and he told his American readers how it is filled with old, old world charm where the Fennells enjoy their garden, simplicity, and their music and art.

Ann was born in Killaloe, Gerald is from Cork, and the two have travelled the world. She was a flight attendant for Ansett Airways in Australia, and also worked for De Beers diamonds, while Gerald served in the Irish Army Medical Corps.

In 1945, Gerald’s grandmother, Elizabeth Fennell, gave her pub and home the name ‘An Seabhac.’ Gerald’s father, Morris, is said to have fought in the Spanish Civil War.

An Seabhac is home to creative works of the Fennell family, including stained glass windows and tapestry hangings by Ann, collections of blue and white porcelain in the family heirloom pine Irish dresser, sculptures by Gerald, antique glass bottles on the bar, a collection of baskets, and paintings and lithographs by Irish artists from the 1920s to the present.

The Fennells continue to live in this corner house. Gerald’s many sculptures include ‘Casualties,’ a tribute to the men killed in World War I. Ann, who loves textiles, antiques and all things beautiful, runs an antique shop in Glin. Their son, Dr Jack Fennell, has a doctorate in literature from the University of Limerick.

The owners are now looking for a property with a smaller garden, and An Seabhac is for sale at ‘a reduced price’ through Scanlon Auctioneers.

The house has four bedrooms, two kitchens, two sitting rooms, and a bar area. Outside there is a high walled garden with over 80 ft of road frontage. The gardens extend to about one-fifth of an acre.

Perhaps it offers an opportunity to open a restaurant in Rathkeale, but the agents also suggest it ‘would make a perfect family home for someone that has the funds and ideas to develop it to its full potential.’ 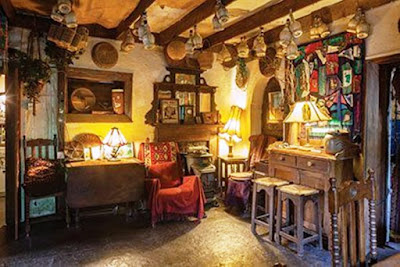 Inside An Seabhac … as seen by Carleton Varney