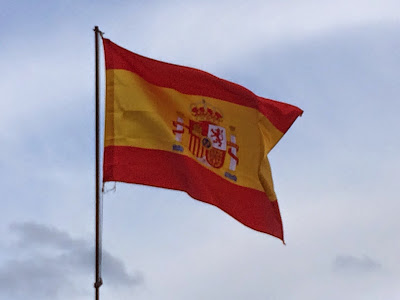 A modern democracy … the Spanish flag flying on the beach at La Carihuela this week (Photograph: Patrick Comerford, 2014)

Last month in Ireland we remembered the fiftieth anniversary of the death of the playwright and author Brendan Behan who died 50 years ago on 20 March 1964 at the age of 41.

During this week in Spain I have wondered about how the Spanish people recovered from the horrors of the civil war in the 1930s and the brutality of the Franco regime, and made the transition to democracy.

While Franco was dying, I stayed awake on many late shifts on the Foreign Desk of The Irish Times, waiting for Franco’s funeral. But the dictator died on 20 November 1975, on a night that I was off work. The same happened to me three months earlier when Eamon de Valera died on 29 August 1975, once again on a night when I was off after sitting through many late shifts.

I had joined the staff of The Irish Times within the past year. Who was I to complain at the time that after two consecutive runs of long, late-night shifts I was never got to shout the old hackneyed phrase: “Hold the Front Page”?

I am reminded in Spain this week of the story told by Ronnie Drew in Sez He and by many others in the past month of how Brendan Behan decided to go to Spain on holidays while it was still struggling Franco’s brutal regime.

When he arrived at Madrid Airport, Behan found the police had obviously been advised about his political views and were waiting for him when he went to the passport checkpoint.

“What is the purpose of your visit to Spain, Mr Behan?”

“I have come to attend General Franco’s funeral.”

“But the Generalissimo is not yet dead.”