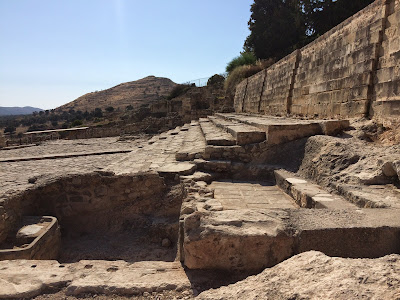 At the end of this week’s long visit to the Monastery of Preveli and three beaches on the south coast of Crete, the evening came to a close with visits to the archaeological site at Phaistos (Φαιστός) and the attractive mountain village of Spili.

The Bronze Age archaeological site at Phaistos, about 5 or 6 km inland, was first identified in 1853 by a British naval commander, Thomas Abel Brimage Spratt (1811-1888), during his Mediterranean Survey in 1853.

Spratt was guided by his reading of the classical Greek historian, Strabo, who had written: “Of the three cities that were united under one metropolis by Minos, the third, which was Phaestus, was razed to the ground by the Gortynians; it is sixty stadia distant from Gortyn, twenty from the sea, and forty from the seaport Matalum; and the country is held by those who razed it.”

The city of Phaistos is associated with Rhadamanthys, a mythical king of Crete. It is first mentioned by Homer, who said it was “well populated” and took part in the Trojan War.

The historian Diodorus Siculus says that Phaistos, Knossos and Kydona are the three main towns founded by King Minos on Crete. However, Pausanias and Stephanus of Byzantium said Phaistos was founded by Phaestos, the son of Hercules or Ropalus.

When Spratt first arrived at the tiny village of Kastri, the village and 16 houses stood on the ridge. But he instinctively knew that there was something greater was there and he realised the remains of fortification walls he could see indicated the site of the ancient city named by Strabo.

However, it was another half century before the Italian archaeologist Federico Halbherr (1857-1930) was able to remove the houses that were on the site and begin to discover the remains of the extensive Minoan palace complex.

Halbherr began his work at Phaistos in 1900, even before Arthur Evans began his explorations at Knossos in 1900. However, Halbherr did not have the same great knowledge Evans had of Minoan civilisation. Nor did he know about the important insights acquired by Michael Ventris through the decipherment of the Linear B.

Halbherr’s excavations at Phaistos came to an end in 1904, but by the time the dig resumed in 1950 archaeologists understood more about the palace and its foundation. 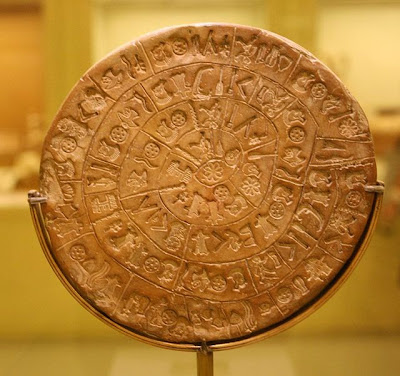 The Phaistos Disc was discovered by Luigi Pernier in 1908

In the intervening years, some exciting discoveries were made at the site. The most important find was in 1908, when the Italian archaeologist Luigi Pernier (1874-1937) found what we now know as the Phaistos Disc at the basements of the northern group of the palace. This is a clay disk, dated some time between 1950 BC and 1400 BC, and stamped with a unique sophisticated hieroglyphic script. The tombs of the rulers of Phaistos were found in the cemetery that was discovered 20 minutes away from the palace remains.

From 1955 on, the place name Phaistos began to turn up in the Linear B tablets at Knossos dating from Mycenaean Greece, and archaeologists now had every reason to believe that Phaistos was indeed located at Kastri.

Although no Linear B has been found at Phaistos, both tradition and the Knossos tablets suggest that Phaistos was a dependency of Knossos. Moreover, only a few pieces of Linear A have been found. As Phaistos appears to have been an administrative centre, it is all the more puzzling that no records have been found to date. 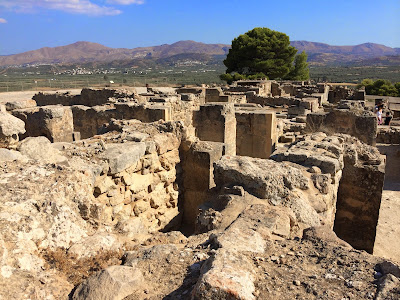 The first palace at Phaistos was built about 2000 BC. This section is on a lower level than the west courtyard and has a nice facade with a plastic outer shape, a cobbled courtyard, and a tower ledge with a ramp that leads up to a higher level.

The old palace was destroyed three times over a period of about three centuries. After the first and second disasters, the palace was repaired and rebuilt.

Around 1400 BC, Phaistos and Knossos were both destroyed by the invading Achaeans, and it appears the palace at Phaistos was never used after that because no evidence of the Mycenaean era had been found uncovered at the site.

Several artefacts with Linear A inscriptions have been found at Phaistos, as well as sub-surface pits, pottery from in the Middle and Late Minoan periods, and Bronze Age works.

The three palaces at Phaistos date from Early, Middle and Late Minoan ages. The older palace looks like a smaller version of the Minoan palace at Knossos. It was destroyed by an earthquake ca 1600 BC, and on its ruins was built a bigger and more magnificent palace with several rooms separated by columns.

Visitors can see the theatre area and the two splendid staircases that led to the main hall of the Propylaea. A twin gate led directly to the central courtyard through a wide street. There were splendidly decorated rooms, spacious ceremonial rooms, and a central courtyard leading to the royal apartments, which had views to the top of Mount Psiloritis.

Phaistos had its own currency and the city formed an alliance with other autonomous Cretan cities, and with the city of Pergamum. It was finally destroyed by the Gortynians at the end of the third century BC, and Phaestos then disappears from history.

We left Phaestos late in the evening, and on our way back to Rethymnon stopped in Spili (Σπήλι), a charming mountain, where we drank from the row of Venetian lion-head fountains in the main square. It was another 40 minute drive back to Rethymnon. 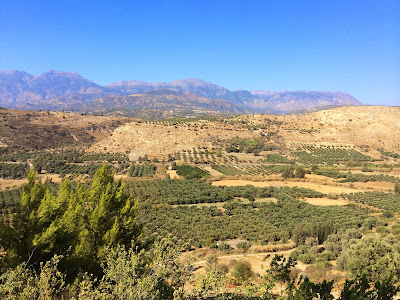 Evening sunshine in the countryside near Phaistos and Spili (Photograph: Patrick Comerford, 2014)