Barcelona, an old city that lives
as if its Europe’s newest capital 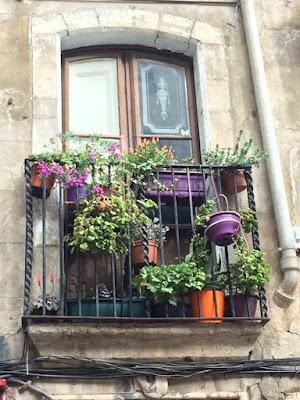 A colourful balcony in the heart of the old city (Photograph: Patrick Comerford, 2016)

Barcelona is the 20th most visited city in the world and is high on the list of the 10 most visited cities in Europe. But I visited it for the first time only a few weeks ago.

I wanted to see the Good Friday processions and to join the Easter celebrations. But this was also an opportunity to enjoy a city with cultural roots that stretch back over 2,000 years, with Greek and Roman remains, one of the finest legacies in Europe of Gothic architecture, and some of the greatest works in modern architecture. And there were opportunities too for walks on the beach in warm sunshine, although it was still a cold Spring back home. 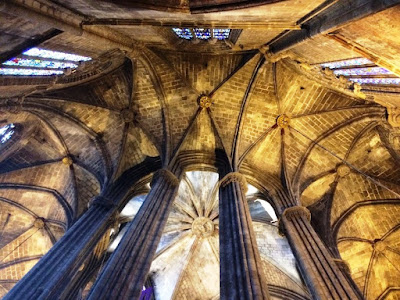 The Gothic splendour of Barcelona Cathedral dates from the 13th to 15th centuries (Photograph: Patrick Comerford, 2016)

With a rich cultural heritage, Barcelona is an important cultural centre and a major tourist destination. This is one of the richest and most economically powerful cities in the EU. It has its own stock exchange with the Borsa de Barcelona, the city hosted the 1992 Summer Olympics and it is home to FC Barcelona, one of the most popular football clubs in the world.

It is no surprise then to learn that Barcelona is an international transport centre, with a busy seaport and airports, and one of the world’s leading centres for tourism, finance, fashion, sport, trade and culture. 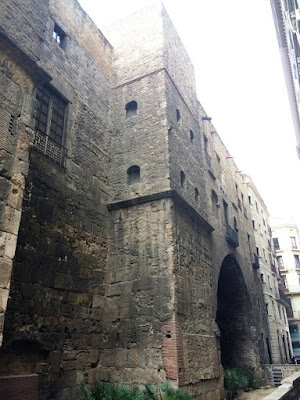 Roman walls and towers in the centre of the old city (Photograph: Patrick Comerford, 2016)

The name Barcelona comes from the ancient Iberian Barkeno, and the place was known in the Classical world as Βαρκινών (Barkinṓn) in Greek and Barcino, Barcilonum and Barcenona in Latin.

Legend says the city was founded by Hercules. Some writers suggest the city takes its name Hamilcar Barca, a general from Carthage and father of Hannibal. Hamilcar Barba is said to have founded the city in the 3rd century BC.

But, legend apart, Barcelona was founded as a Roman city. The place had an excellent harbour, and in 15 BC the Romans established a military camp on a hill at the present day Plaça de Sant Jaume, where the city hall now stands. The Roman camp grew into a colony known as Faventia, or Colonia Faventia Julia Augusta Pia Barcino, or Colonia Julia Augusta Faventia Paterna Barcino.

The Roman grid plan can be seen in the layout of the historical centre, the Barri Gòtic or Gothic Quarter, where I was staying. Fragments of the Roman walls have been incorporated into the cathedral, which was founded in 343. 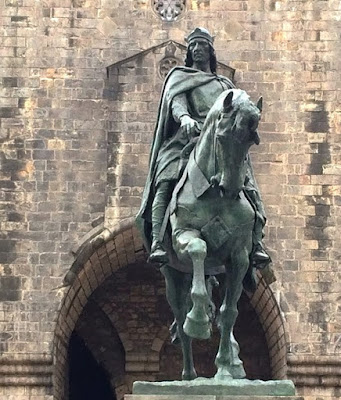 Ramon Berenguer III the Great was Count of Barcelona (1086-1131) and his reign unified much of Catalonia (Photograph: Patrick Comerford, 2016)

The city was conquered by the Visigoths in the early fifth century, and for a few years was the capital of Hispania. It was taken by the Arabs in the early eighth century. It was conquered in 801 by Charlemagne’s son Louis, who made Barcelona the seat of the Hispanic March, a buffer zone ruled by the Count of Barcelona. The city was sacked by the army of al-Mansur (Almanzor) in 985. It was a traumatic assault in which most of Barcelona’s population was either killed or enslaved. 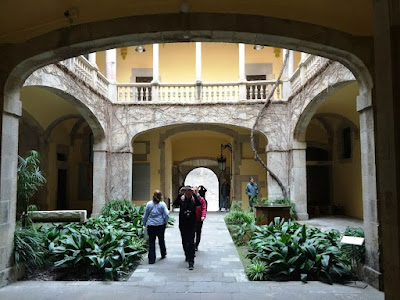 Barcelona has a rich heritage of museums, palaces and churches (Photograph: Patrick Comerford, 2016)

In the Middle Ages, Barcelona an important city in the Kingdom of Aragon. The Counts of Barcelona became increasingly independent and expanded their territory to include all Catalonia.

In 1137, Aragon and the County of Barcelona were merged in a dynastic union with the marriage of Ramon Berenguer IV and Petronilla of Aragon. Aragon went on to conquer many overseas territories and to rule the western Mediterranean. By the 13th century, Aragon’s territories included the Balearic Islands, Naples, Sicily, Corsica, Sardinia, Malta and for a while Athens and parts of Greece (until 1388) and Southern Italy (from 1442). 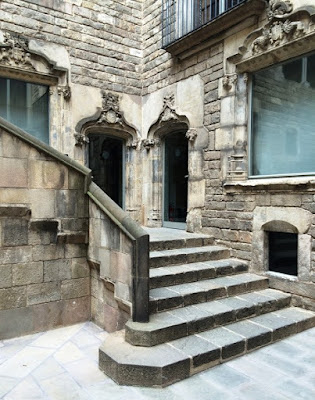 Many buildings in the Barri Gòtic or Gothic Quarter of the old city date from mediaeval times (Photograph: Patrick Comerford, 2016)

The Bank of Barcelona may be the oldest public bank in Europe. It was established in 1401 and predates the Bank of Venice (1402) and the Bank of Genoa (1407). The University of Barcelona dates from 1450 and has campuses around the city.

The Columbus Monument (Monument a Colom) – a 60 metre high seafront monument at the lower end of La Rambla – was erected in 1888. It is a reminder that after his first journey to the new continent in 1492, Christopher Columbus reported to Queen Isabel of Castile and King Ferdinand of Aragon in Barcelona on 15 March 1493. 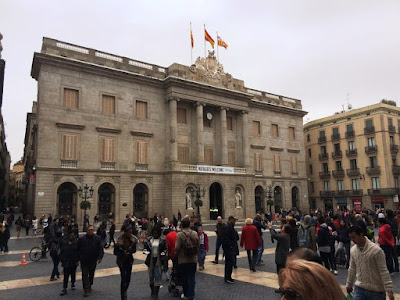 But the marriage of Ferdinand and Isabel made Madrid the centre of political power in a new Spain, and the political and economic decline of Barcelona had started to set it. In the 17th century, Barcelona was at the centre of the rise of Catalan separatism, but the great plague in the 1650s halved the city’s population. Barcelona suffered again during the Napoleonic wars, but industrialisation revived the fortunes of the city and of Catalonia.

During the Spanish Civil War, Barcelona and Catalonia were strongly Republican and their resistance to Franco is chronicled by George Orwell in his Homage to Catalonia. The fall of the city on 26 January 1939 caused a mass exodus of civilians who fled to the French border. Catalonia’s autonomy was abolished, but the Catalan language was suppressed. But, despite the devastation of the civil war, Barcelona remained relatively prosperous and experienced rapid urbanisation. 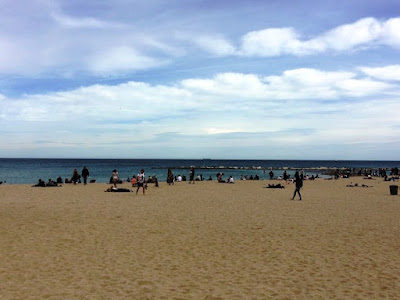 Barcelona’s beaches, close to the centre of the city, are among the world’s top ten (Photograph: Patrick Comerford, 2016)

Barcelona has a great number of museums, parks and beaches. In all, there are 68 municipal parks: 12 historic parks, five thematic parks, 45 urban parks and six forest parks. Barcelona also has seven beaches along 4.5 km of coastline, close to the Olympic Harbour. The beaches are listed as the No 1 beach in a list of the top 10 city beaches in the world.

I was staying the Hotel Suizo in the Barri Gòtic or Gothic Quarter in the centre of the old city, where many of the buildings date from mediaeval times, and some even to Roman times. 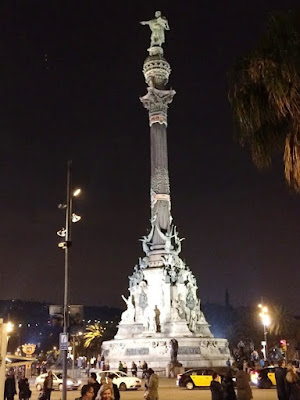 The Columbus Monument, erected in 1888, is a reminder that Christopher Columbus was welcomed back to Spain by Ferdinand and Isabel in Barcelona (Photograph: Patrick Comerford, 2016)

I was just two or three minutes’ walk from Barcelona’s great Gothic Cathedral of the Holy Cross and Saint Eulalia. It dates back to 343, and some claim it stands on the site of an earlier Roman temple. The present cathedral was built in the 13th to 15th centuries, with the main work carried out in the 14th century. 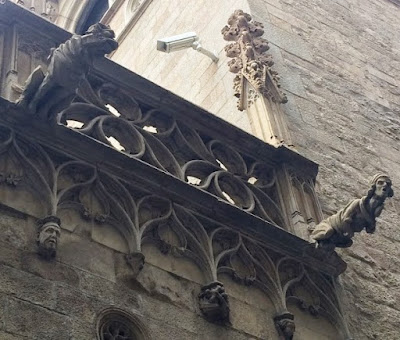 The choir stalls display the coats-of-arms of the knights of the Order of the Golden Fleece, whose Spanish chapter meet here. The roof is known for its gargoyles, depicting a wide range of domestic and mythical animals. The cloisters, which were completed in 1448, encloses the Well of the Geese. The neo-Gothic façade was completed in the late 19th century. 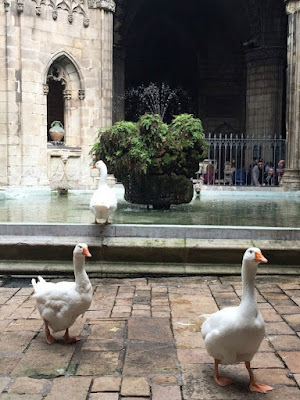 A flock of 13 white geese has permanent sanctuary in the cloisters of Barcelona Cathedral (Photograph: Patrick Comerford, 2016)

Despite several changes in the 19th and 20th centuries, many of the buildings in the Barri Gòtic date back to the Middle Ages and some back to the Roman period. There is a labyrinthine street plan, with many small streets and alleys and cobblestone squares.

Beside the cathedral, in Plaça del Rei, the Palau Reial dates from the 13th and 14th centuries and is an example of Catalan Gothic. Before Spain was united this was the Royal Palace of the Kings of Aragon, and it was here that Ferdinand and Isabel welcomed Columbus back to Spain in 1493.

Plaça de Sant Juame is the political heart of Barcelona. The open cobbled square marks the site of the Forum in Roman Barcino. Today it is flanked by the Ajuntament or City Hall on one side, and the Palau de la Generalitat or the seat of the Catalan Government on the other side. Barcelona is the capital of autonomous Catalonia, with its own government, executive, parliament and Supreme Court.

In the Jewish Quarter 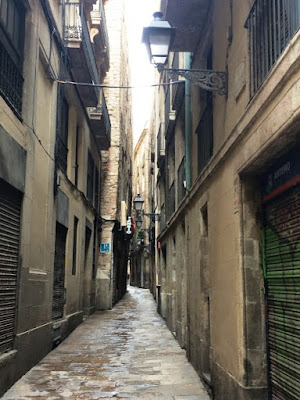 In a narrow side street in the Call, once the heart of Jewish Barcelona (Photograph: Patrick Comerford, 2016)

The square leads into El Call, which was the mediaeval Jewish quarter of Barcelona from the 12th century. The name means “narrow street” or “lane” but was used for the whole area. Carrer de Sant Domènec was the main street of the Call and included the Great Synagogue and the houses of the most prominent members of the Jewish community.

When the Call was attacked in 1391, 300 Jewish residents were murdered. The Call never recovered from that terrible episode. The Church of Sant Jaume on Calle Ferran stands on the site of what was the old synagogue of Barcelona. Some Jews continued to live in Barcelona, although in fewer numbers, but they were all expelled 100 years later under decrees issued by Ferdinand and Isabel.

Heritage and the future 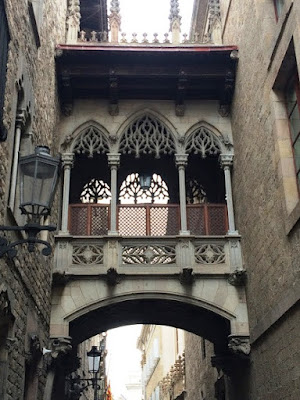 13, Some of the Gothic architecture of Barcelona has been restored in the last century (Photograph: Patrick Comerford, 2016)

Today, Catalonia is one of the richest regions in Europe, with a GDP per capita that is far higher than the EU average, and Barcelona is the fourth most economically powerful city in the European Union and 35th in the world.

Barcelona is also known for the architectural works of Antoni Gaudí and Lluís Domènech i Montaner. Catalan modernista architecture developed from 1885 to 1950 and several of these buildings are World Heritage Sites. The work of the Antoni Gaudí includes the unfinished Basilica of the Sagrada Família, which is expected to be completed in 2026. 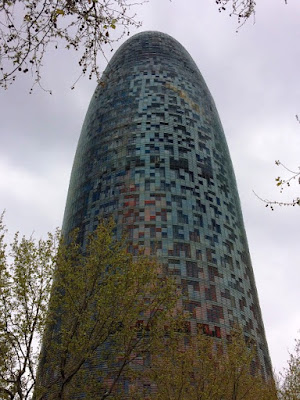 Barcelona won the 1999 RIBA Royal Gold Medal for its architecture, the first and only time that a city has been the winner and not an individual architect. One of the landmark contemporary buildings is the Torre Agbar, a 38-storey skyscraper tower in the Poblenou neighbourhood, was designed by French architect Jean Nouvel and cost €130 million to build.

The Catalan language was repressed under Franco’s dictatorship. But since the arrival of democracy, works from the past have been recovered and Catalan is enjoying a revival. While Spanish is the most spoken language, there is an increasing and noticeable use of Catalan, which is understood by almost everyone. 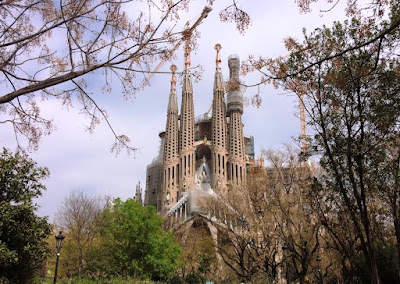 Sagrada Familia, Gaudí’s masterpiece, is expected to be completed in 2016 (Photograph: Patrick Comerford, 2016)

Recently [9 November 2015], the Catalan parliament approved a plan for secession from Spain by 2017 in a vote 72-63 vote. The plan was suspended by the Constitutional Court, but Catalonia remains culturally distinctive and proud, and Barcelona feels like a cultural capital.

This cultural and political confidence was palpable on Sunday as a stood outside the cathedral on Sunday afternoon and watched the distinctive Catalan national dance, the sardana, performed by hundreds of people in the Plaça de la Seu or the cathedral square.

Who can predict whether Barcelona is going to become the capital of Europe’s newest nation state? I hope to return, but meanwhile next month I plan to take another look at the architectural works of Antoni Gaudí and Lluís Domènech i Montaner in Barcelona. 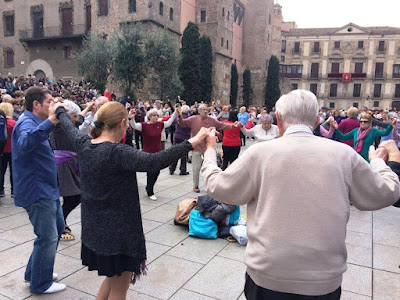 The Catalan national dance, the sardana, is performed by hundreds of people in the Plaça de la Seu every Sunday afternoon (Photograph: Patrick Comerford, 2016)

Canon Patrick Comerford lectures in the Church of Ireland Theological Institute. This feature was first published in May 2016 in the Church Review (Dublin and Glendalough) and the Diocesan Magazine (Cashel, Ferns and Ossory)