It was good to be a ‘Black Santa’
for an afternoon, despite the rain 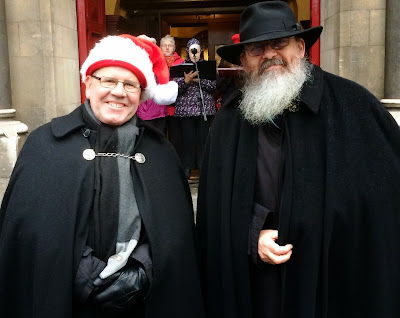 I hate asking people for money.

So, this afternoon, it took a little extra mental energy to hold a bucket and stand in the rain for two or three hours shaking a bucket outside Saint Ann’s Church in Dawson Street.

This has probably been the wettest day in Dublin so far this winter. I have only been wetter this year when I sat on a wet seat on an open-top tour bus in Lisbon one day last month.

I can say the wet and the cold are easier to endure than looking people straight in the face and asking them for money.

But it was all worth while.

I had volunteered to spend the afternoon as part of the team shaking collecting boxes at this year’s Black Santa sit-out at St Ann’s Church to help the city’s homeless.

The sit-in was launched 24 hours earlier by Archbishop Michael Jackson and the Lord Mayor of Dublin, Christy Burke.

This is the 14th year that sit-out appeal has been held at St Ann’s and to date it has raised almost €400,000 for charity. The Black Santa Appeal gets its name because the clergy involved wear black cloaks. The original concept began in 1975 when Dean Samuel Crooks started standing outside Saint Anne’s Cathedral, Belfast, at Christmas time. A similar idea was taken up by my dear friend, the late Canon Norman Ruddock, when he became Rector of Wexford 20 years ago.

This afternoon I swapped black cloaks with the Revd Rob Jones from Rathmines as I joined Fred Deane and the carol singers and other collectors outside Saint Ann’s.

I am embarrassed to look at people putting money in the collection boxes, and prefer to look into their faces with a smile and wish them a Merry Christmas.

It is two years since I have taken part in the Black Santa Appeal. But once again I could not avoid being impressed once again to see people rolling up €50, €20 and €10 notes to place in the collecting tins. I was even more impressed to realise that some people were putting in small change, counting out what they could afford and leaving themselves with only enough coins for the bus fare home, or deciding to forgo that cup of coffee they may have planned as treat.

And, in silent moments, I was cheered to hear passing children pointing me out to their parents, remarking on my white beard, and asking (despite the fact that I was covered in black clothing from head to toe): “Is that the real Santa?”

Dawson Street is lined with coffee shops, boutiques and big-name clothes shops. It is one of the most fashionable shopping streets in Dublin. Those who passed by and stopped included a former President, and leading politicians and business figures. But there were cheering waves too from tourists on hop-on, hop –off buses – doubtless as wet as I was that afternoon in Lisbon last month.

And the widows’ (and widowers’) mite is always the most impressive contribution .., indeed, on a cold and wet afternoon, they are the most heart-warming.

The Vicar of Saint Ann’s, Canon David Gillespie has invited his clerical colleagues from in the Dioceses of Dublin and Glendalough to join him outside his city centre church each day from 10 am until 6 pm until Christmas Eve, singing carols and collecting money for homeless charities.

At each lunchtime over the coming days, the clergy collecting outside Saint Ann’s are being supported by carol singers from a variety of choirs, including choirs from Castleknock National School, Saint James’s Primary School, Francis Street CBS, Catholic University School, Kildare Place National School, Loreto College, and John Scotus School, as well as members of the Seafield Singers, the Brook Singers, the Dublin Male Voice Choir, the Line Up Choir, Taney Parish Junior Choir, choir, the Revenue Choir and the Steadfast Band.

This year the money collected is being distributed among charities working with the homeless in inner city Dublin, including Trust, the Salvation Army, the Simon Community, the Peter McVerry Trust, Barnardo’s, the Society of Saint Vincent de Paul, and Protestant Aid.
This is inner-city street mission finding its best expression in the Church at this time of the year. As I was standing outside Saint Ann’s this afternoon, someone shared on the Affirming Catholicism Facebook page an image from the Orthodox Christian Network with a quotation from Saint Chrysostom: “If you do not find Christ in the beggar at the Church door, neither will you find Him in the chalice.”

But this is not an “either/or” choice – it is a “both/an” imperative for the mission of the Church.

If you still have Christmas shopping to do in Dublin, and you are in the city centre, remember there is still a week to go until Christmas, and call around to Saint Ann’s in Dawson Street. Even a cheery word will raise the morale of my friends and colleagues. And you could make a difference to one homeless person or family this Christmas. 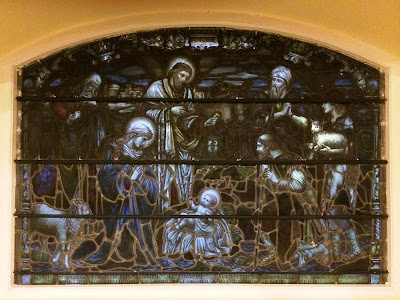 Posted by Patrick Comerford at 20:09 No comments:

As part of my spiritual reflections for Advent this year, I am looking at an appropriate hymn for Advent each morning. This morning [18 December 2014], on the 307th birthday of Charles Wesley, I have chosen the Advent hymn ‘Come Thou Long Expected Jesus’ by Charles Wesley (Irish Church Hymnal, No 119).

Charles Wesley was born at Epworth Rectory on 18 December 1707, the youngest son and the 18th of 19 children of the Revd Samuel Wesley. He was educated at Westminster School and Christ Church, Oxford, where he graduated in 1726 and became a college tutor.

He was ordained priest in the Church of England, and in 1735 he went with his brother John Wesley to Georgia as missionaries with the Society for the Propagation of the Gospel (SPG, later USPG, and now Us).

He returned to England a few months later in 1736, and continued to work closely with his brother. He wrote at least 6,500 hymns, so that he became known as the “Bard of Methodism.”

He strongly disapproved of his brother John’s ordinations, expressing his disapproval in an outspoken manner. He died in London on 29 March 1788, and was buried in Marylebone churchyard. He said: “I have lived, and I die, in the Communion of the Church of England, and I will be buried in the yard of my parish church.”

This hymn was first published anonymously in 1745 as a Christmas rather than an Advent hymn. However, the emphasis in on the coming of Christ as king, and this explains why it is widely used as an Advent hymn today.

‘Come, thou long expected Jesus’ is sung to many tunes, including ‘Jefferson’ by William Walker, ‘Stuttgart’ attributed to Christian Witt, ‘Hyfrydol’ by Rowland Pritchard), and ‘Halton Holgate’ by William Boyce. However, in the Irish Church Hymnal the preferred tune is from The Crucifixion, a well-loved oratorio by Sir John Stainer (1840-1901), which was used when I presided at the Cathedral Eucharist in Christ Church Cathedral, Dublin, last Sunday [14 December 2014].

Stainer was the first organist of Saint Michael’s College, Tenbury, before becoming the Organist of Magdalen College, Oxford (1860-1872) and then Organist and Master of the Choristers at Saint Paul’s Cathedral, London (1872-1889). Later, he returned to Oxford as Heather Professor of Music (1889-1899). He died in Italy on holiday in 1901.

Come, thou long expected Jesus,
born to set thy people free;
from our fears and sins release us;
let us find our rest in thee.

Israel’s strength and consolation,
hope of all the earth thou art;
dear desire of every nation,
joy of every longing heart.

Born thy people to deliver,
born a child and yet a king;
born to reign in us for ever,
now thy gracious kingdom bring.

By thine own eternal Spirit,
rule in all our hearts alone:
by thine all-sufficient merit,
raise us to thy glorious throne.

Tomorrow: ‘Creator of the starry height’

Posted by Patrick Comerford at 08:41 No comments: