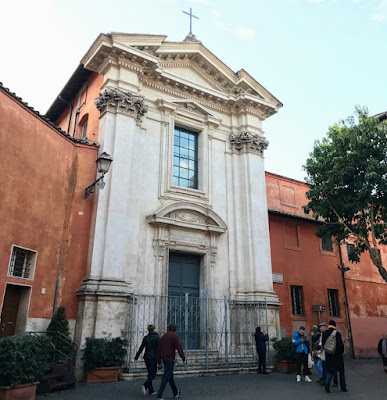 Santa Maria della Scala in the heart of Trastevere has an unassuming façade (Photograph: Patrick Comerford, 2017) 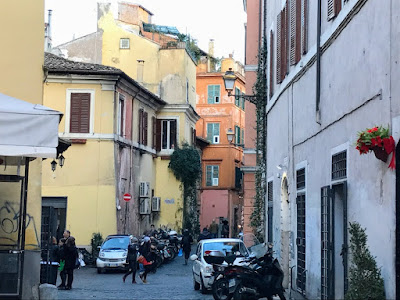 Yet, this church has a richly decorated baroque interior, is a good example of a time of great building activity that lasted from the end of the 16th century through to the early 17th century, has links with Garibaldi’s struggle to unify Italy, and hides a secret story about how Caravaggio shamed the local friars.

Santa Maria della Scala, or Our Lady of the Staircase, shares its name with a better-known church in Siena. This is a titular church, that gives its title a cardinal, yet it was built in 1593-1610 to honour a miraculous icon of the Virgin Mary.

Tradition says that the icon was placed on the landing of a staircase of a neighbouring house, where a mother prayed before it and found that her disabled child was cured. The icon is now on display in the north transept, alongside a baroque statue of Saint John of the Cross. 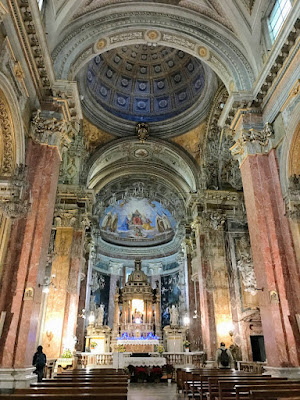 This church was built on the site of a house once owned by Antonio Stinco from Ancona, who bequeathed it to a Casa Pia founded by Pope Pius IV in 1563 for women wishing to ‘convert to an honest life,’ or repentant prostitutes. Saint Charles Borromeo, who was involved in the project, is commemorated in the dedication of a small oratory that once stood next to the church.

The project was initiated by Pope Clement VIII in 1593, together with Cardinal Tolomeo Gallio, who was the patron of the Casa Pia. They chose Francesco Capriani da Volterra as the architect. But Capriani died the following year having completed only the nave and side chapels.

In 1597, the unfinished church was entrusted by the Pope to the Discalced Carmelites, much of the artwork in the church has Carmelite themes. The friars contracted Matteo da Città di Castello and Ottaviano Nonni Il Mascherino to build their convent next door, which became one of the most important Carmelite houses.

Nonni died in 1606 and so the work was probably finished by Girolamo Rainaldi, who had worked on one of the side chapels in 1604. The cardinal died in 1607, but his nephew Monsignor Marco Gallio agreed to continue funding and the church was finally completed in 1610.

The Carmelite friars continued the decorative work throughout the first half of the 17th century. In 1650, almost 50 years after the church was completed, Carlo Rainaldi designed the tempietto-shaped baldachino with 16 slender jasper Corinthian columns and a high altar.

In 1664 the church was made titular, and Paolo Savelli became the first cardinal deacon. The church was restored in the 1730s, and much of the decoration dates from then.

The last two cardinals linked with the church were François-Xavier Nguyen Van Thuan from Vietnam, who died in 2002, and Cardinal Stanislaw Kazimierz Nagy, who died in 2013.

Cardinal Ernest Simoni Troshani became the cardinal two months ago when he was named by Pope Francis on 19 November 2016. He is a Franciscan-educated priest who was never consecrated a bishop. He spent 28 years in prison camps in Albania, and was sentenced to death on two occasions. 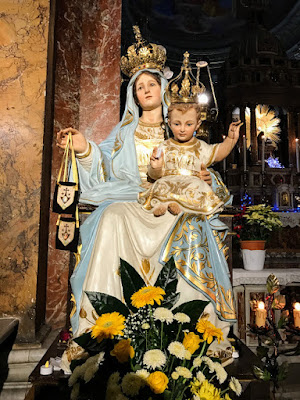 The unfinished church was entrusted to the Discalced Carmelites In 1597, and the church has many Carmelite themes (Photograph: Patrick Comerford, 2017)

The façade of the church is restrained but it is large and in some ways it dominates the little piazza in front. This two-storey façade is higher than the nave behind it. The central portion of the first storey is brought forward slightly, and has two pairs of gigantic Corinthian pilasters flanking the doorway and supporting the blank entablature. Another pair of pilasters stand at the outer corners.

The entrance has a pair of swagged Ionic columns, and over the door is a baroque statue of the Madonna and Child in an ornate arched niche with a ribbed conch, volutes and a crowning triangular pediment intruded into by the conch. The sculptor was Francesco di Cusart, who carved it in 1633.

The second storey has two pairs of pilasters of the same style as those of the storey below, except the capitals are composite and not Corinthian. They flank a large rectangular window with a balustrade and Ionic columns, and this has a raised segmental pediment. The crowning triangular pediment contains a simple coat of arms, and this storey is flanked by a pair of gigantic volutes.

The plan of the church is based on a Latin cross, with short transepts that do not extend beyond the walls of the nave aisles. The central dome has a shallow pitched and tiled saucer on an octagonal drum without windows. This has a tall lantern, with its own smaller octagonal cap.

Inside the church, there are three chapels on each side of the single, three-bay nave, and a transept with a domed crossing, with an altar in each end of the transept. The sanctuary has a single bay, and is continued by a choir with an apse behind the high altar, which has a free-standing, domes baldacchino. This baldacchino has 16 slender Corinthian columns of Sicilian alabaster. The statues of the four Evangelists look like bronze, but are terracotta – the originals were looted in 1849.

The surfaces of the interior walls and ceilings are richly decorated. The vaults of the nave, dome, choir and left arm of the transept are decorated with painting intended to resemble mouldings. The right transept ceiling has fine example of stucco relief.

The floor has several interesting tomb slabs, and the one commemorating Julio Caesari Castellano (1662) shows a winged skeleton.

The apse of the choir has a painting of the Virgin Mary as Queen of Heaven, flanked by paintings of the Baptism of Christ, the Marriage at Cana, the Last Supper and the Ascension by Lucas de la Haye (Fra Luca Fiammingo), a Carmelite friar. The apse conch has a fresco of Christ with his mother and Saint Joseph, and Carmelite saints. 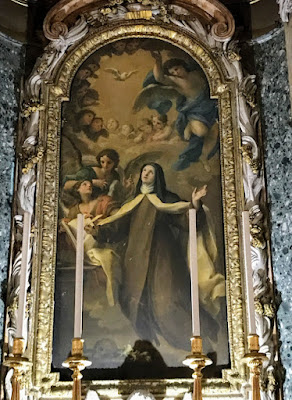 The side chapels are dedicated to Saint John the Baptist, Saint Hyacinth, Our Lady, Saint Joseph and Saint Anne, Saint Teresa of Jesus, Our Lady of the Staircase, Our Lady of Mount Carmel, the Assumption, the Crucifix or Saint John of the Cross.

Some of these side chapels are also the funerary chapels of Roman families, including the Sinibaldi, Dionisi, Barisiani, Sorbolongo and Santacroce families.

The church stands next to a Carmelite monastery that served in the 17th century as the pharmacy of the Papal Court.

In 1849, during the last stages of the Roman Republic’s resistance to the invading French forces, Santa Maria della Scala was used as a field hospital to care for Garibaldi’s soldiers who had been wounded in fighting in Trastevere. Most of the fighting took place near Trastevere, which explains why the Garibaldi monument overlooks the church from the Janiculum.

The convent was sequestered by the Italian government in 1873 and turned into a police station. But the Carmelites continue to administer Santa Maria della Scala.

Saint Teresa of Jesus was a Carmelite reformer whose work led to the formation of the Discalced Carmelites as a separate order. In her side chapel, the altarpiece is ‘The Ecstasy of Saint Teresa’ by Francesco Mancini (1745). The saint’s right foot is preserved in this chapel as a relic. 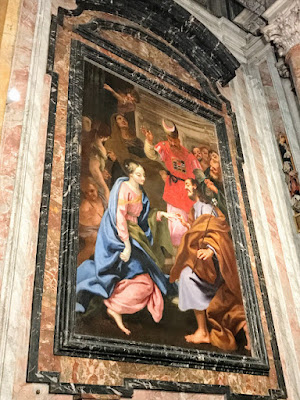 ‘The Marriage of Our Lady’ by Antonio David (Photograph: Patrick Comerford, 2017)

The other paintings in the church include ‘The Beheading of Saint John the Baptist’ by the Dutch painter Gerrit van Honthorst and ‘The Death of the Virgin’ by Carlo Saraceni, and ‘The Marriage of Our Lady’ by Antonio David. Saraceni’s painting replaces a more controversial original work by Caravaggio.

According to some legends, Caravaggio used the body of a prostitute who had drowned in the Tiber as the model for the dead Virgin Mary. An alternative version says the model was one of the artist’s mistresses. In addition, there are still debates about what happened to the Virgin Mary’s body after her death, and the Discalced Carmelites at Santa Maria suspected Caravaggio’s treatment of the topic not only lacked decorum but was close to what they regarded as heresy. Caravaggio’s original work made its way to the Louvre.

However, Caravaggio’s altarpiece of ‘The Entombment of Christ’ survives in the Chiesa Nuova or the Church of Santa Maria in Vallicella, which I am writing about tomorrow.

Tomorrow: Chiesa Nuova, or the Church of Santa Maria in Vallicella.