What do you call your Greek coffee?
I call mine ελληνικός or σκέτος 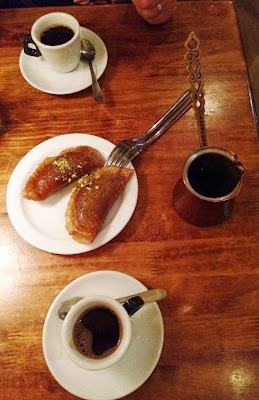 After a walk in Saint Enda’s Park in Rathfarnham late this afternoon, two of us decided to go for dinner in a small Italian restaurant in Ranelagh.

The summer colours were still vibrant in the flowers in the walled garden, but there were autumn colours in the trees around the park and by the banks of the streams and brooks, the leaves were beginning to fall, and in one place there was a blanket of fallen chestnuts on the green grass.

It was early in the evening when we arrived in Ranelagh. But as we drove around looking for parking, we realised the place was closed and were glad we had not paid for parking. Instead, we fell back on an old and trusted favourite in Rathmines – Little Jerusalem.

We had expected to end our meal in Ranelagh with double espressos. Instead we ended by asking for two Lebanese coffees, only to be corrected: “Arabic coffees?”

What’s the difference between Lebanese coffee and Arabic coffee? Between Greek coffee and Turkish coffee?

What do you call it?

What is known as Turkish or Arabic coffee was simply “coffee” throughout the Middle East until the introduction of instant coffee in the 1980s. Today, it is known as Türk kahvesi (Turkish coffee) in Turkey. In the Arab world, it is “Arabic coffee” (qahwa ‘arabiyya), and variations such as Egyptian, Syrian or also indicate different traditions about its flavour, preparation, and presentation.

In Greece, Cyprus and the throughout the Arab world, western-style instant coffee is usually referred to as “Nescafé” without implying one particular brand. 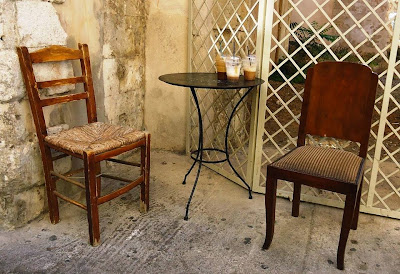 Frappe for two or three in Rethymnon in Crete(Photograph: Patrick Comerford)

Frappe (φραπές, frapés) is a Greek foam-covered iced coffee drink made from instant coffee and popular during the summer months. But real Greek coffee is a strong brew, just like the coffee we were served in Little Jerusalem this evening. It is served with foam at the top and the grounds at the bottom of the cup, and is best made in the μπρίκι or briki, the traditional small pot, because it allows the proper amount of foam, which adds to the unique taste.

To make Greek coffee you need a pack of Greek coffee, sugar, if you use it, a μπρίκι (briki), traditional-sized small cups, cold water, and glasses of water.

The traditional μπρίκι (briki) is known in Turkey as a cezve It usually comes in two, four and six cup sizes that help form the right amount of foam ... a very important part of the process.

You start with very cold water, and use a small, traditional coffee cup to measure the water needed for each cup of coffee, and then pour the water into the briki. Mix a heaped spoonful of Greek coffee with the amount of sugar needed according to taste.

Unsweetened coffee is σκέτος (sketos), medium-sweet coffee, with one teaspoon of sugar for each heaped teaspoon of coffee, is μέτριος (metrios). Sweet coffee takes two teaspoons of sugar in the briki and is called γλυκός (glykos).

Turn on the heat at medium low, stir the coffee until it dissolves, and do not stir again. As you heat the coffee slowly, foam will start to rise in the briki before it boils. This foam is called καϊμάκι (kaïmaki) and the richer the foam, the better Greeks like it.

Once it starts, the foam can move very quickly. When the foam rises to the top of the briki, remove it from the heat and serve. You evenly divide the foam among all the cups, then fill the cups with the remainder of the coffee, taking care not to disturb the foam.

Greek coffee is served in cups about the same size as espresso cups and is always served with a cold glass of water. When the coffee is served out into the cups, it is allowed to settle, with the grounds settling at the bottom of the cup. 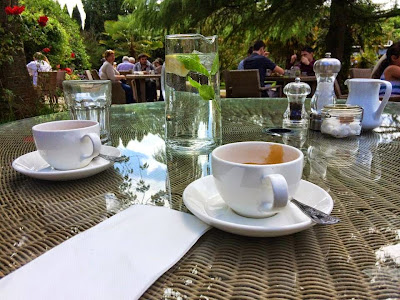