An Irish pub in Rethymnon that
outshines all other Irish bars 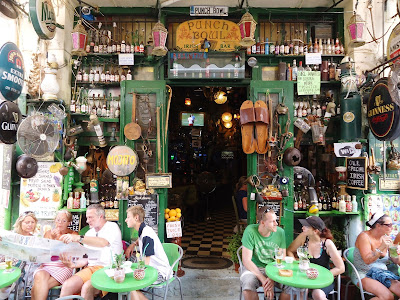 Tourists stop for a drink and to plan the day at the Punch Bowl in the Old Town in Rethymnon (Photograph: Patrick Comerford, 2013)

I’m not very fond of ‘Irish pubs.’ Although I have ended up, by accident in Irish-themed pubs in places as far apart as Madrid and Seoul, I’ve always found them twee and a bit too “Oirish.”

But late last Thursday, after we got back to Rethymnon after a long bus journey from Iraklion, we were strolling through the narrow streets and alleys in the Old Town when we ended up outside the Punch Bowl at No 42 Arabatzoglou (formerly Thessaloniki) Street.

I have passed the bar many times, and even stopped to photograph it early one morning during the week when I was photographing the wooden first floor Ottoman balcony on the house opposite it. But never before had I been tempted inside the Punch Bowl.

And our table outside, on the street – a green table with two green chairs – gave us a delightful view of life as it passed by on Thursday night.

Outside and inside, every available space on the façade and the walls of the Punch Bowl is covered with the most eclectic collection of bric-a-brac and artefacts – and not all of them are from Ireland – making it unlike any pub in Ireland, and unlike any ‘Irish pub’ I have come across elsewhere. 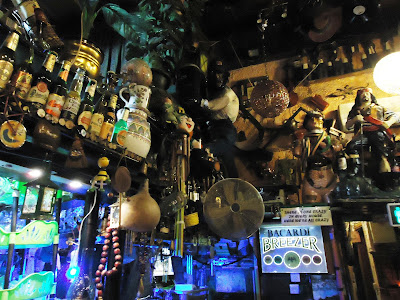 Part of the collection inside the Punch Bowl in Rethymnon (Photograph: Patrick Comerford, 2013)

Outside, there are saddles and outsize sandals, bridles and chalk boards offering Irish Coffee and Mojitos and advertising free WiFi; inside, there are lamps and old cameras, African masks and figures of fun, pots and pans, framed whiskey labels and a framed poster for Irish music, a floor tiled in Kilkenny black-and-amber, amber worry beads and an old Irish accordion; and everywhere, inside and outside, there are bottles, old and new, arrayed on every available shelf space.

Most of the people drinking there were sitting outside, like us, watching life pass by. Only two or three people were inside, and they were there to watch the Arsenal v Spurs match on Sky Sports.

Every now and then, as a couple he knew or a guest from a previous evening, or young people on a hired rickshaw passed down through the narrow street, Christos the proprietor, who has an Irish wife, took a brass or copper post horn down from the wall above him and blew it loudly to his own amusement.

How long this continued for I have no idea. But when we left, they were still serving customers, and the lights for Kilkenny and Guinness were still aglow. 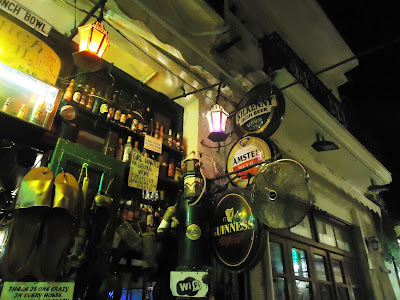