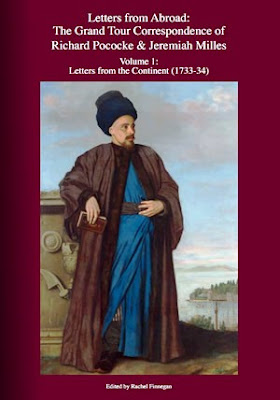 The Grand Tour was the “finishing school” for many young men of means from the late 17th century for almost 200 years until the advent of rail travel in the mid-19th century. For the sons of the aristocracy and the landed gentry, especially in Britain and Ireland, the Grand Tour was a rite of passage that completed their liberal education.

They followed similar routes, with their valets, guides and cooks as they learned about painting, sculpture and the classics and as they spent time in Venice and in Rome. And they returned with crates of art, books, paintings, sculpture, and other items displaying their acquisition of taste, culture and knowledge, so that the Grand Tour symbolised wealth and freedom and marked a ritual entry to genteel society in the British Isles.

Irish aristocrats whose accounts of the Grand Tour have come down to us either through their published works or their architectural legacy include James Caulfeild (1728-99), 1st Earl of Charlemont, and Frederick Hervey (1730-1803), Bishop of Derry and 4th Earl of Bristol. Later, Howe Peter Browne (1788-1845), 2nd Marquess of Sligo, met Byron in Athens, brought a ship full of antiquities from Greece to Westport House in Co Mayo, including the 3,000-year old columns from the so-called Treasury of Atreus at Mycenae, and gave the name Delphi to his private fishery.

Now Dr Rachel Finnegan, who lectures in cultural and heritage studies in the Waterford Institute of Technology, is working on the previously unpublished Grand Tour correspondence of Richard Pococke (1705-65), later Bishop of Ossory, and his younger cousin Jeremiah Milles (1714-84), later Precentor of Waterford Cathedral (1736), Dean of Exeter 1762 and President of the Society of Antiquaries.

They set out in 1734 and 1736 on two tours of Continental Europe, which they recorded in their travel journals and 53 surviving letters, including 22 letters from Pococke to his mother and many more from both cousins to their uncle, Thomas Milles, Bishop of Waterford and Lismore.

Some years ago, the Revd Professor John R Bartlett, former Principal of the Church of Ireland Theological College, published an account of Pococke’s travels in Lebanon in 1738. But Dr Finnegan’s planned series promises much more. In the first volume of a three-volume collection, she reproduces the edited Grand Tour letters of that first voyage (1733-34). Their tour was cut short when Milles decided to return to Ireland to become Treasurer of Lismore Cathedral in his uncle’s diocese. The second and third volumes promise to follow their second tour of Continental Europe (1736-37) and Pococke’s continuing tour of the eastern Mediterranean (1737-41), beginning with his arrival at Leghorn.

This volume also includes biographies of the two correspondents and of the recipients of the letters, Pococke’s mother, Elizabeth, who lived near Southampton, and her brother, the Bishop of Waterford and Lismore.

Dr Finnegan was previously at the British School of Archaeology at Athens (1989-91), and worked at the Royal Irish Academy (1991-95). She has written on the connoisseurship of the 2nd Earl of Bessborough, the Divan Club, Richard Twiss’s Tour of Ireland in 1775, and Bishop Pococke’s improvements to Saint Canice’s Cathedral, Kilkenny. Now in these three volumes she promises to rescue Pococke from a previous description as ‘the dullest man that ever travelled’.

She has gone through the letters from Pococke and Milles in the British Library (and has found three further letters in the Gloucestershire Archives), carefully reconstructing the passages deleted by either Pococke or his mother, giving us fresh insights, from his financial problems dealings with an Irish banker, and his careful attention to his wigs and his wardrobe, to his petty observations of the great and powerful: the Doge of Venice was ‘like an old woman’, the Pope, then 84, was ‘blind, they say, but looks well’.

The Bishop of Waterford and Lismore was totally unfazed during these years by the fact that his nephew was absent from his diocese for such as lengthy period even though he was Vicar-General of Lismore, Precentor of Lismore Cathedral and the incumbent of at last nine parishes. Indeed, the bishop may have financed the tours.

Certainly, Pocoke was typical of the many pluralist and absentee clergy of the day, though better travelled. Absence and neglect were no hindrance to preferment, and he went on to become Archdeacon of Dublin (1746), Bishop of Ossory (1756) and Bishop of Meath (1765). In Kilkenny, where he spent almost a decade, he is best remembered as the founder of the Pococke School, now amalgamated with Kilkenny College.

At first, Pococke may have decided not to publish his letters and journals because of the scathing attacks and disdain he endured from fellow travellers, but he later wrote up his travels in two volumes, A Description of the East (1743 and 1745).

Apart from leaving letters and papers, Pococke also left mummies, both human and animal, he had acquired in Egypt. How did he come to acquire them? To know this and to learn about his travels in the Eastern Mediterranean, including Greece, Turkey, Lebanon and Egypt, we must wait for the later volumes, and Volume 3 in particular, promised in 2012.

The reviewer lectures in Anglicanism and Liturgy at the Church of Ireland Theological Institute and Trinity College Dublin.

Tis book review appears in Astene Bulletin, Notes and Queries (Association for the Study of Travel in Egypt and the Near East), Number 50: Winter 2011-12 (February 2012), London.
Posted by Patrick Comerford at 06:30 No comments: