A quiet corner with rustic charm near Lichfield Cathedral 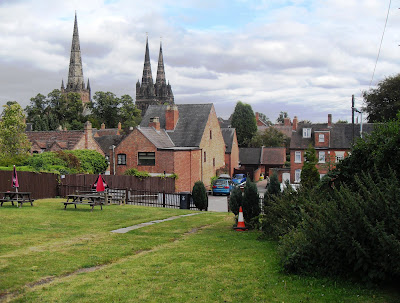 The three spires of Lichfield Cathedral seen from Prince Rupert’s Mound ... a hidden corner of Lichfield and one of two open space areas scheduled as ancient monuments (Photograph: Patrick Comerford, 2011)

Prince Rupert’s Mound is a hidden corner of Lichfield, known to few visitors, but one of the tranquil places I was happy to introduce another visitor to last week. This grassy knoll is behind the George and Dragon on the east side of Beacon Street, and is easily found by turning into Gaia Lane, and walking down a few paces, where it rises on the left or north side.

Prince Rupert’s Mound is one of two open space areas in Lichfield that are scheduled as ancient monuments – the other is the Friary remains site. Last Friday, two of us visited Prince Rupert’s Mound, which place takes its name from the earthworks that supported the artillery bombardment of the Cathedral Close by Prince Rupert of the Rhine during the sieges in the English Civil War of the mid-17th century.

In 1643, after the Parliamentarians had consolidated their positions in Lichfield and strengthened their defences in the Close, Prince Rupert (1619-1682) entered the city on 7 April. He surrounded the Close, setting up his artillery on this high ground north of the cathedral close. In April 1643, Prince Rupert commanded the second siege of The Close, and captured it for King Charles within two weeks. During this siege, the bombardment from the platform proved ineffective, and Prince Rupert recruited miners to tunnel beneath the north-west tower, where they successfully laid the first land mines ever to be used in Britain.

The parliamentarian commander, Colonel Russell, surrendered on 21 April, and a Royalist garrison with Colonel Richard Bagot as governor took over.

Prince Rupert, who was born in Prague, was the German or Bohemian (take your choice) grandson of James I and nephew of Charles I. He passed through Lichfield again in March 1644 on his way to relieve Newark and once more on his way back.

Lichfield remained a royalist stronghold, supported by financial levies, donations, and money taken from the enemy, until 1646. On 9 March 1646, Sir William Brereton captured Lichfield and began a four-month siege of the Cathedral Close. The besieged royalists used the central spire of the cathedral as a vantage point, and when they flaunted regimental colours and officers’ sashes from it on May Day it became a symbol of resistance in the eyes of the parliamentarians.

Brereton bombarded the cathedral for five days, and on 12 May the central tower collapsed, damaging the choir and nave. However, the royalist garrisons in the Close continued to resist even after the fall of Oxford on 26 June and only surrendered on 10 July marching out on 16 July.

The cathedral was desecrated by the parliamentarians in 1643, when its glass, statues and organs were destroyed. The final siege left it in ruins along with the Bishop’s Palace and many of the houses in the Close. 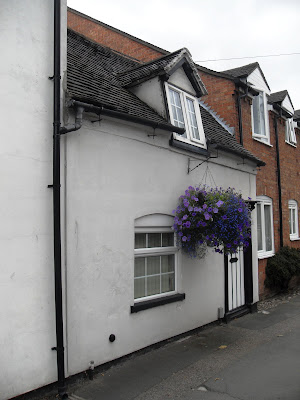 Lickle Cottage ... typical of the houses that add to the charm and character of Beacon Street (Photograph: Patrick Comerford, 2011)

The looting that followed brought about further destruction. Beacon Street was burnt by the royalists during the final siege to deprive the attackers of cover, and 52 houses there belonging to the vicars choral were destroyed, although some had been rebuilt by 1649.

With the destruction of the cathedral in 1646, centuries of religious custom came to an end, for the next 14 years the cathedral was “a place of ruin, inhabited by squatters and haunted by owls a night,” according to the local historian Howard Clayton. 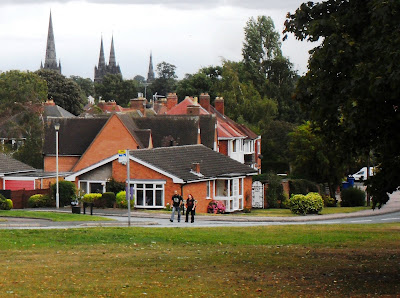 The three spires of Lichfield Cathedral seen from Stafford Road on the northern edges of the city (Photograph: Patrick Comerford, 2011)

The destruction of the cathedral by the parliamentarian forces continued long after the last shots were fired in the Civil War. The contents of the cathedral library were dispersed after the surrender of 1646, and the early records of the corporation disappeared.

Elias Ashmole (1617-1692), the Lichfield-born antiquarian, noted in his diary towards the end of 1651 that the Parliamentarian Governor of Stafford, Colonel Danvers, had ordered “workmen to strip off lead from the roof,” and Ashmole feared that the cathedral was about “to be totally ruined.” In 1652, he noted how only two of three cathedral spires remained standing. By mid-1653, a pewter manufacturer had removed the Jesus Bell from the cathedral to break into pieces for his workshop.

Services in the cathedral were resumed by mid-June 1660, the chapter was reconstituted that September, and parliamentarian soldiers squatting in the clergy houses in the Close were evicted.

Work on rebuilding the ruined cathedral began in earnest with the arrival of Bishop John Hacket in August 1662, and it was rededicated on Christmas Eve 1669. A new bishop’s palace was built in 1687 and a new deanery in 1707. 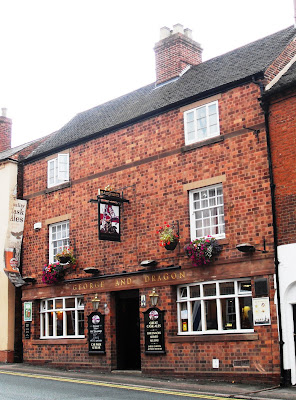 Today, Prince Rupert’s Mound is a Scheduled Monument and is listed by Lichfield District Council as an important historic site within the designated character area of Gaia Lane. It serves too as a beer garden for the George and Dragon, a pub with character facing onto Beacon Street.

Beacon Street is a charming residential area in the north of Lichfield, with some timber-framed houses and cottages as well as houses influenced by the Arts and Crafts Movement, that add to the character of the area and giving it a curious ambience that is a mixture of both rural setting and late Victorian suburb. 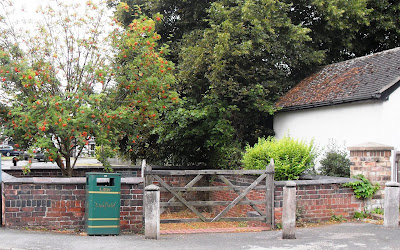 Just outside the north-western tip of the conservation area, on the west side of Beacon Street, where it becomes Stafford Road, is the last remaining Pinfold in Lichfield. Pinfolds were built for stray cattle at the main entrances to towns and cities. In Lichfield, the person responsible for rounding up and impounding these animals in the 1500s, was the “Warden of the Fields.” By the mid 1600s, the job title had become “Pinner,” and two pinners were elected, with responsibility for Saint Chad’s Parish, the other for Saint Michael’s Parish.

Two pinners and pinlock keepers continue to be elected in Lichfield each year at the ancient manorial court of Saint George.

This last remaining pinfold in Lichfield dates from the 18th or 19th century, although its origins can be traced to an earlier pinfold in Beacon Street. In 1645, this stood near the corner of the present Anson Avenue, north of Prince Rupert’s Mound. But it was removed in 1809 and replaced by the pinfold on Stafford Road. It was repaired and restored in 1990 with the assistance of the Conduit Lands Trust. 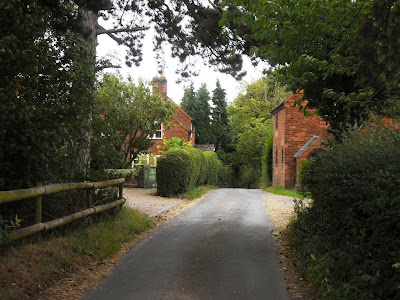 The rural and rustic charms of Cross-in-Hand Lane, behind the Hedgehog on Stafford Road in Lichfield (Photograph: Patrick Comerford, 2011)

Meanwhile, what happened to Prince Rupert? In English folklore, he remains the archetypal cavalier. But he was quarrelsome and difficult, and regularly fell out with both his uncle Charles I and with his fellow royalist officers.

After the civil war, he became a pirate in the Caribbean and a slave trader, but he returned to England after his cousin Charles II was restored to the throne, and gained a new reputation for his scientific explorations and discoveries. He died in 1682 and was buried in Westminster.

His sister was the mother of George I, and so the British monarchy passed to a line of German princelings from Hanover.
Posted by Patrick Comerford at 13:06 No comments: