A sculpture in the boating lake
that adds serenity to Farmeligh 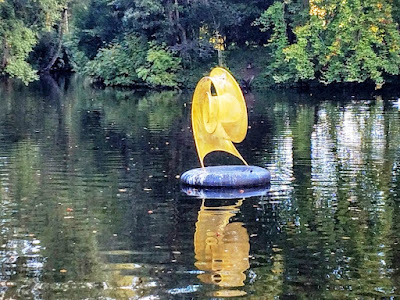 ‘Unfurling’ by Anne McGill … adds a note of calm and serenity to Farmleigh (Photograph: Patrick Comerford, 2016)

Sitting on the decking outside the Boathouse Café in Farmleigh yesterday afternoon, enjoying a late Sunday lunch, I found myself once again enjoying ‘Unfurling’ Anne McGill’s floating sculpture, ‘Unfurling,’ in Farmeligh Lake.

While excited children and their amused parents are busy feeding the mallards in the former Guinness family boating lake, this work adds a note of calm and serenity to this corner of the Phoenix Park in Dublin.

This floating sculpture is an unfurling fern frond in the pond and was designed by Anne McGill, a sculptor living in Dublin who has also designed floating sculptures that have been exhibited in ‘Sculpture in Context’ in the National Botanic Gardens in Glasnevin.

Anne McGill lives and works in Dublin. She was born in Co Tyrone in 1952, and she studied architecture at Queen’s University, Belfast. She worked as an architect until 2008 and since then she has been working in sculpture full time.

Her sculpture has moved through different mediums, starting in ceramics and bronze, and she now works mainly with wood wire and flexible materials. Her work varies in size from large outdoor sculpture to small studio pieces.

She has exhibited in many exhibitions over the years, including the RHA and RUA annual shows, and in the annual ‘Sculpture in Context’ exhibition in the National Botanic Gardens, Glasnevin.

Last month, Anne McGill showcased a collection of her new sculptural musical pieces at her studio in Clontarf [September 2016]. In this exhibition, ‘Taking Notes Apart,’ which was curated by Tony Strickland, she drew on inspiration from the elements of music to create her expressive abstract art pieces. 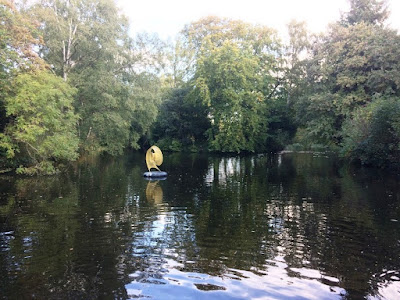 ‘Unfurling’ by Anne McGill … by the Boathouse Café at Farmleigh in the Phoenix Park (Photograph: Patrick Comerford, 2016) 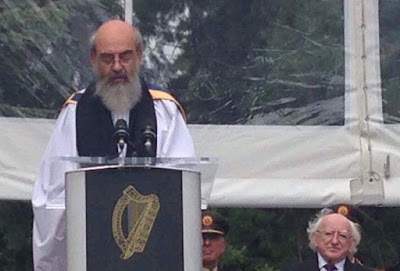 This month’s edition of ‘The Church Review’ [October 2016], the Dublin and Glendalough diocesan magazine, carries these photographs and half-page news report on page 14:

The Minister for Arts, Heritage, Regional, Rural and Gaeltacht Affairs, Ms Heather Humphreys, said that at the height of the Famine, 50-60 funerals a day were taking place in Glasnevin, making it one of Ireland’s largest Famine burial grounds.

The chargé d’affaires at the British Embassy, Mr Neil Holland, was among foreign ambassadors and diplomats who laid wreaths at the memorial. 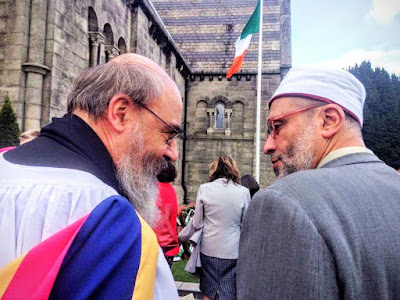