Joseph Armitage Robinson, a Cambridge
theologian from an Irish family 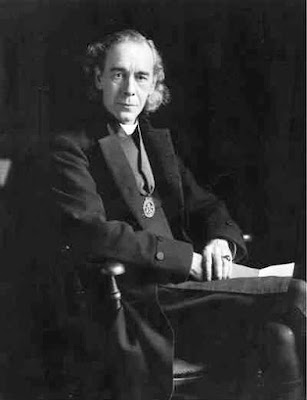 Over the past few weeks, I have been putting the finishing touches to a chapter on Preaching and the Eucharist, for consideration for a proposed book on preaching in the Anglican tradition.

As part of my research, I was looking at what Patristic writers had to say about preaching at the Eucharist and found myself reading Joseph Armitage Robinson’s St Irenaeus, the Demonstration of the Apostolic Preaching translated from the Armenian with Introduction and notes (London: SPCK, 1920).

In his ‘Preface’ to this scholarly treatment of a work by Robinson writes:

‘The wonder of Irenaeus is the largeness of his outlook. No theologian had arisen since Saint Paul and Saint John who had grasped so much of the purpose of God for his world. “The Making of Man,” to borrow Tennyson’s great phrase, is his constant theme. Even though he was forced to be controversial, he was never merely negative; and the last of his books Against Heresies ends on the keynote of the whole – that man shall at length be made “after the image and likeness of God.” This is to him the meaning of all history; and for that reason the centre point of history is the Incarnation. So Christ came “to link up the end with the beginning,” or in St Paul’s words, (which Irenaeus never tires of repeating,) “to gather up into one all things” in himself.’

During my study week in Cambridge earlier this month, speaker after speaker regularly referred to similar words from Saint Irenaeus during the IOCS summer conference in Sidney Sussex College: “The Glory of God is the living man; And the life of man is the vision of God.” The same words are inscribed on the memorial stone commemorating Archbishop Michael Ramsey in Canterbury.

Joseph Armitage Robinson (1858-1933) was a Cambridge theologian with honorary doctorates from Göttingen, Halle, Trinity College Dublin and Glasgow. He was part of a lengthy theological tradition that included Charles Gore, Joseph Lightfoot, Fenton Hort, Brooke Westcott and John Wordsworth, and that reached back to figures like Van Mildert, Waterland, Burnet, Cosin, Andrewes and Hooker. He was one of the great Patristic scholars in the Church of England at the end of the 19th and beginning of the 20th century, and was Dean of Westminster Abbey (1902-1911) and then Dean of Wells Cathedral (1911-1933) until his death.

Armitage Robinson was part of the generation of Cambridge theologians that followed the great Dublin-born Patristic scholar, Fenton John Anthony Hort (1828-1892), who, with Brooke Westcott, was the editor of The New Testament in the Original Greek. But I was surprised to discover in recent days that Robinson also had strong Irish family connections, for both his father and his mother were Irish-born.

He was born the son of a poor Somerset vicar in Keynsham, between Bristol and Bath. His father, the Revd George Robinson, was born in Co Monaghan and educated at TCD (BA 1844, MA 1859). He was ordained in the Church of Ireland but moved to England in 1847, where he was curate in Saint James’s, Clapham, and then Vicar of Keynsham, Somerset (1854-1870) and Vicar of Saint Augustine’s, Everton, Liverpool (1870-1881). He died in 1881 in Marseilles, where he was buried. Armitage Robinson's mother, Henrietta Cecilia, was a daughter of Arthur Forbes, of Craigavad, Co Down, and George and Henrietta had 13 children, including six sons who were in holy orders, which was a record, and two daughters who were deaconesses.

He received an honorary doctorate from Trinity College Dublin (DD) in 1908, and in 1920 he returned to his father’s alma mater as the Donnellan Lecturer. His lectures in TCD were published as Barnabas, Hermas and the Didache: Being the Donnellan Lectures Delivered Before the University of Dublin in 1920 (London: SPCK, 1920).

While he was Dean of Westminster Abbey, he was made an honorary Fellow of Christ’s College in 1905, an honour he held until his death. He was knighted in 1932, shortly before he died at Upton Noble in Somerset on 7 May 1933.

Other brothers included the Revd John Robinson, who died while he was a CMS missionary in Nigeria, Canon Charles Henry Robinson (1861-1925), who died while he was Editorial Secretary to SPG, and Canon Forbes Robinson (1867-1904), Fellow of Christ’s College, Cambridge, author of Translation of Coptic Gospels and Letters to His Friends, curate of All Saints’ Church, Cambridge (1891-1892) while his brother Armitage was the vicar, Chaplain of Emmanuel College, Cambridge (1891-1896), Chaplain and Junior Dean of Christ’s College (1896-1904).

Another brother, Edward Forbes Robinson (1864-1921), was a missionary teacher in South Africa, where he died, and Dr Frederick Augustine Robinson (1870-1906), who was a Medical Missionary with the Universities’ Mission to Central Africa (UMCA), died in 1906 in Natal.

The Robinsons are an outstanding clerical, theological and missionary family, but until recently I was not aware of their strong connections with both Cambridge and Ireland. I think they may be worth looking at again and writing about them more fully.