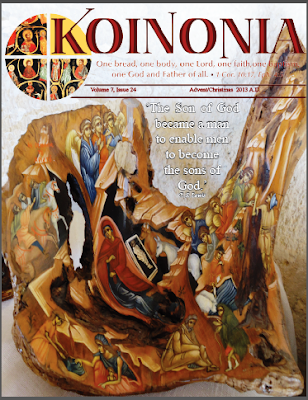 My photograph of ‘The Incarnation’ by Eleftheria Syrianoglou, a ‘table icon’ in a recent exhibition in Rethymnon, features on the front cover of the Christmas 2013 edition of Koinonia

The Incarnation by Eleftheria Syrianoglou, who exhibited a number of “table icons” worked in on various shapes of olive wood (Photograph: Patrick Comerford, 2013)

These three ancient cities, with their mixtures of Byzantine, Venetian and Ottoman heritage, are strung along the northern coast of this most southerly of Greek islands. Culturally, Iraklion is the city that has produced great writers such as Nikos Kazantazkis, author of Zorba the Greek, and a school of great icon painters, whose masters include Mikhail Damaskinos (ca 1530/35-1592/93) and Domenikos Theotokopoulos (1541-1614), known to the West as El Greco.

Iraklion’s Museum of Religious Art is housed in Agia Aikaterini Museum, beside the Cathedral of Saint Minas. The church once belonged to the Monastery of Saint Catherine on Mount Sinai and now serves as a museum for the Orthodox Archdiocese of Crete, with outstanding icons that include works by Damaskinos.

But there is a real germ of truth in that Cretan aphorism, for Rethymnon is truly at the heart of cultural life in Crete. The small city, with its walled old town, celebrates its cultural heritage with an annual Renaissance Festival, which has now been established for over a quarter century – for as long as I have known this charming city with its narrow streets and rich architectural heritage.

For the past two years, we have stayed in an hotel in a converted old Venetian mansion, behind the library and close to many of the town’s great Byzantine and Venetian churches, with their interiors decorated richly with traditional icons and frescoes.

The Icon Exhibition in the Artillery Hall in the Fortezza is part of the 26th Renaissance Festival of Rethymnon (Photograph: Patrick Comerford, 2013)

About 30 icon writers or painters took part in this year’s exhibition. Some of them are well-known in Greece, but at least three remained anonymous, exhibiting simply in one case as a member of the Holy Monastery of the Transfiguration, with three icons in the exhibition, and in another case as two members of the community of nuns at the Holy Monastery of Saint Irene.

George and Christopher Karaviotis, who exhibited ten icons, gave each other equal credit for their works. There was also once icon on loan from the Byzantine Art Centre in Rethymnon, which stands in an old Venetian/Ottoman mansion in the old town, close to our hotel.

Many of the icon writers or painters in this year’s exhibition were neither priests nor monks, and there were some woman among the exhibitors, including Eleftheria Syrianoglou, who exhibited a number of “table icons” worked in on various shapes of olive wood.

The Congregation of All Angels, by a nun from the Monastery of Agia Irini (Photograph: Patrick Comerford, 2013)

Emmanuel Nikolidakis, who had three icons in the exhibition – including one of the Holy Four Martyrs of Rethymnon – works on glass, and then frames them against a red background so they can be seen distinctly.

George Christides had three large modern interpretations of traditional themes: the Lamentation at the Burial of Christ, the Annunciation, and the Angel of the Apocalypse.

Our Lady of the Angels by Alexandra Kaouki, who works close to the Fortezza in her workshop on Melissionou Street (Photograph: Patrick Comerford, 2013)

Alexandra Kaouki, who works on modern, bright and vibrant icons and frescoes that are true to the tradition and inherited styles, drew particular acclaim for her three exhibits: Our Lady of the Angels, Christ Pantokrator and Our Lady of the Way.

There were new interpretation of the images from Fayum, which tell us a lot about the early development of icon painting, an amusing image of the “Sea gives up its Dead” ... although the artist was not listed in the catalogue.

Modern icons on sale in the shop in the Fortezza (Photograph: Patrick Comerford, 2013)

This was an exciting collection of works seeking to maintain, develop and reinterpret a tradition religious art form. The exhibition was sponsored by the Ecumenical Patriarchate, the Diocese of Rethymnon and the Municipality of Rethymnon.

Last year’s exhibition in 2012 was visited by the Ecumenical Patriarch, Patriarch Bartholomeos, and the Metropolitan or Bishop of Rethymnon, Metropolitan Evgenios, who at the time voiced their hope that this exhibition would become an annual event.

Later in the week, I visited Alexandra Kaouki’s workshop on Melissionou Street in the narrow streets and alleyways below the Fortezza. She works away at her easel, unperturbed and undisturbed by the casual visitors and the curious tourists who walk in off the street, often unaware of the rich heritage they are being invited to experience.

She is one of the many icon writers who work in store-front studios and workshops throughout Rethymnon. It was in one of these workshops that I first bought an original icon from Andreas Theodorakis 25 years ago.

These icon writers are expressing theology in art, but their open workshops and their exhibitions are also an engaging form of mission, offering the essential story of salvation to tourists and holidaymakers who are invited to experience the Living Word in a way that is paradoxically both ancient and modern. 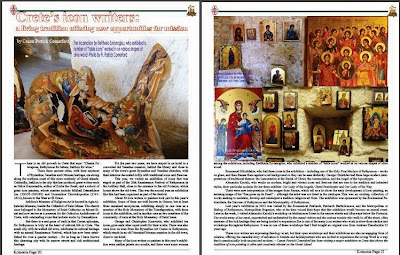 This morning in the Calendar of the Church we remember the martyrdom of Saint Stephen [26 December]. It is an important that this day follows Christmas as reminder that there is a Cost of Discipleship, in the words of Dietrich Bonhoeffer, and that there can be no such thing has cheap grace.

My choice of a work of art for today, the second day of Christmas, is a painting of Saint Stephen by the great Florentine painter and architect GIotto di Bondone (1267-1337). Giotto painted this wood panel in tempera on ca 1320-1325. It measures 84 x 54 cm, and is in the Museo Horne in Florence.

This wood panel, which is in good condition, was originally part of a polyptych that is now scattered through several museums. The central panel of the Madonna is in the National Gallery of Art in Washington, and other panels can be seen in the Musée Jacquemart-André in Chaalis.

Giotto paid close attention to the transparency of the colours on this panel of Saint Stephen. These colours were applied with delicate brushstrokes that reveal Giotto’s awareness of the increasingly fashionable Gothic style.

Saint Stephen is dressed in a deacon’s dalmatic and carries a bound book. Although the tone is not worldly or courtly, there is a feeling that Giotto is challenging his contemporary, Simone Martini of Siena.

Dante regarded Giotto as the leading artist of his day. He is the first in a line of great artists who contributed to the Italian Renaissance, and he influenced Renaissance painters such as Masaccio, key figures in the High Renaissance, including Raphael and Michelangelo, and later the Pre-Raphaelites in Victorian England.

His work is marked by his clear, grave, simple solutions to the problems of representing space and the volume, structure, and solidity of three-dimensional forms, especially the human form. He got to the heart of events in Biblical and Church history so he could express their inner spiritual meaning in simple ways.

His frescoes of the Life of Saint Francis on the lower walls of the Upper Church of San Francesco in Assisi were probably paint in the mid-1290s, and mark the early work of Giotto.

His mosaic in Rome of the Navicella (ca 1300) was regarded as his most important work. But it is now cut-down and a shadowy echo of its former glory.

His signed altarpieces include the Stigmatisation of Saint Francis (The Louvre, Paris), the Baroncelli Altarpiece (Santa Croce, Florence) and the polyptych of the Madonna and Saints (Pinacoteca Nazionale, Bologna). His other great works include the Ognissanti Madonna (The Uffizi, Florence), the Dormition of the Virgin (Berlin) and a Crucifix in Santa Maria Novella, Florence.

But his greatest masterpiece must be the frescoes in the Arena Chapel, Padua (ca 1304-1313), depicting scenes from the lives of Saint Joachim and Saint Anne and the Virgin Mary, and from the Life and Passion of Christ. These frescoes are unsigned and undocumented, as are his Life of Saint Francis and his Lives of Saint John Baptist and Saint John the Evangelist in the Bardi and Peruzzi Chapels and in Santa Croce, Florence. 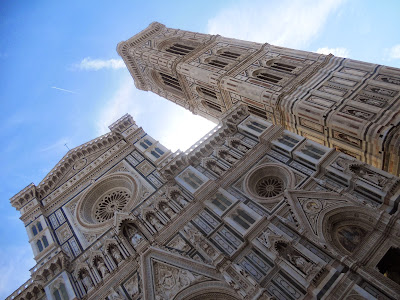 The Campanile or “Giotto’s Tower” at the cathedral or duomo in Florence (Photograph: Patrick Comerford)

In the last years of his life, Giotto was commissioned to design the Campanile or “Giotto’s Tower” at the cathedral or duomo in Florence. He died in Florence in January 1337, and may have been buried in duomo, although other sources, he was buried in the Church of Santa Reparata. He is represented among the many statues outside the Uffizi.

When he died, he had only finished the lower floor of the bell tower with its marble external revetment: geometric patterns of white marble from Carrara, green marble from Prato and red marble from Siena. But this work made Giotto, along with Brunelleschi and Alberti one of the founding fathers of Italian Renaissance architecture.

Tomorrow: ‘The Vision of Saint John the Evangelist on Patmos,’ by Correggio.