‘No, not Angles, but Angels’ 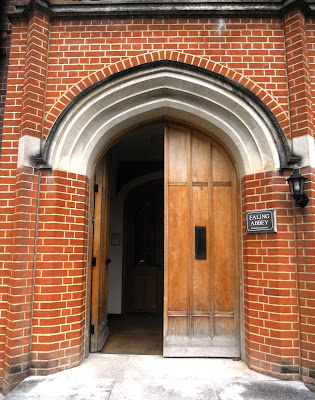 With the Angels and the Angles at Ealing Abbey (Photograph: Patrick Comerford, 2012)

There is a custom in monastic houses of eating community meals in silence. Often the silence is maintained gently by a monk reading during the meal from the Bible and the martyrologies. In Orthodox monasteries I have also heard readings from Patristic writings, and in Benedictine houses the readings are often from the Rule of Saint Benedict.

Last night during dinner, we heard from the martyrologies about Saint Bartholomew the Apostle, whose feast day is today [24 August]. And, like most evenings this week, we also heard some extracts from The Mitre and the Crown: A History of the Archbishops of Canterbury (2005) by Dom Aidan Bellenger and Stella Fletcher.

Dom Aidan Bellenger is the Abbot of Downside Abbey and former headmaster; Stella Fletcher is a lecturer and writer on history. His books include Medieval Worlds (2002) and two histories of Downside Abbey, while her books include the Longman Companion to Renaissance Europe (1999). Together, they have also written Princes of the Church: the English Cardinals. (2001).

Some of the accounts of the Archbishops of Canterbury sound amusing today, although you have to wonder how many of them spent much time in their diocese before the last century as most of them lived between Lambeth Palace and their country seats. Indeed, we heard last night of one archbishop who was enthroned by proxy. It makes you ask what kept him so busy that day that he had to send someone else along to let the chapter, the dean and God know that he had taken up his appointment – delayed by another appointment, perhaps.

The English Benedictines trace their story back to monasteries founded in the seventh century by Saint Wilfrid and Saint Benet Biscop, who were inspired by what they saw of the monastery at Canterbury, founded by Saint Augustine, who had been sent to England by Pope Saint Gregory.

Bede recalls the story of Pope Gregory seeing fair-skinned, blue-eyed Anglo-Saxon boys being sold in the slave market in Rome, and asking: “Who are these people?”

“They are Angles,” was the reply.

“Non Angli sed Angeli,” replied Gregory. “No, not Angles, but Angels,” After he became the first monk to be elected pope in 590, Gregory sent Augustine, Prior of his former monastery of Saint Andrew on the Coelian Hill in Rome, to England in 597 with a group of 40 monks.

The Saint Augustine Gospels, which are kept in the Parker Library at Corpus Christi College, Cambridge, are still used at the enthronement of the Archbishop of Canterbury. Archbishop Rowan Williams showed them to Pope Benedict XVI during the Pope’s visit to England last year, and they should get another outing next year when a new Archbishop of Canterbury is enthroned. br />
The chain of succession from Augustine’s Benedictines was broken with the Viking invasions of England. But the Benedictine tradition was revived with the monasteries restored by Saint Dunstan, Saint Ethelwold and Saint Oswald in the tenth century. 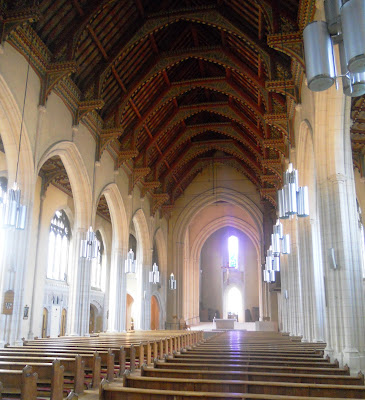 IBenedictine monks who were bishops in Ireland have included John Stokes, Bishop of Kilmore, who was a Suffragan Bishop in Lichfield in 1407; John Chourles, who was Bishop of Dromore (1410-1433), but spent most of his time as a Suffragan Bishop in Canterbury (1420-1433); Robert Mulfield, a Cistercian monk of Meaux, who was Bishop of Killaloe but spent all that time as a suffragan in the Diocese of Lichfield from 1418 to about 1440; and Robert Blyth, Abbot of Thorney and Bishop of Down and Connor, who was a suffragan in the Diocese of Ely from 1520-1541.

In addition, at least 18 of the Reformation bishops were Benedictine or Cistercian monks. Today, there are more than half a dozen Anglican communities and houses in England who also follow the Rule of Saint Benedict, including Edgware Abbey, Malling Abbey, Saint Benedict’s Priory in Salisbury, Costock Convent, Mucknell Abbey, Alton Abbey and Saint Hilda’s Priory in Whitby.

It has been interesting to spend the past two weeks with the Angels and the Angles in Ealing Abbey. I return to Dublin at the weekend.