This year’s programme focuses on the work of American painter Robert Henri and the Achill–born poet, John F Deane, marking his 70th birthday. This evening (Saturday), Maurice Harmon will speak in St Thomas’s Church, Dugort, on ‘Lonesome, between times – the Poetry of John F. Deane.’ This will be followed by a reading by John F. Deane.

Tomorrow morning (Sunday), after a guided walk on Inishbiggle, Canon Patrick Comerford of the Church of Ireland Theological Institute will give a lecture at 11 a.m. in Holy Trinity church, on ‘The history of the Church of Ireland on Inishbiggle’. In the afternoon, at 4 p.m., Canon Comerford will speak in Bunacurry School on Achill Island on ‘The poet as theologian, the theologian as poet … a theologian’s engagement with John F. Deane.’ This will be followed by poetry readings by Maurice Harmon, Harry Clifton, Gerard Smyth, James Harpur, Padraig Daly and Jacques Rancourt. 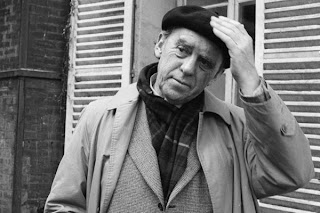 I am staying on Achill Island this weekend, taking part in the ninth annual Heinrich Böll Memorial Weekend which opened last night [Friday, 3 May] and which continues until Monday [6 May].

Heinrich Theodor Böll (1917-1985) was one of Germany’s foremost writers in the aftermath of World War II and was awarded the Nobel Prize for Literature in 1972. He was a leader of the German writers who tried to come to grips with the memory of World War II, the Nazis, and the Holocaust and the guilt that came with them.

Böll lived with his wife in Cologne and in the Eifel region, but they also spent time on Achill Island off the coast of Co Mayo during the 1950s and 1960s. I am staying in Gray’s Guest, close to his cottage in Dugort, which is now used as a guesthouse for international and Irish artists.

Many of his experiences in Achill are recalled in his book, Irisches Tagebuch (Irish Journal), which describes in loving detail his journey to Achill and his observations of island life.

Heinrich Böll was born into a liberal Catholic and pacifist family in Cologne on 21 December 1917. He was conscripted into the German army during World War II and fought on the Russian and French fronts. He was wounded four times before being captured and held in a US prisoner-of-war camp.

He began writing after World War II, drawing on his experiences as a soldier. His first novel was published in 1949 and he went on to publish over 20 books. He also translated Irish writers, including GB Shaw and JM Synge, into German.

Like Paul Henry and Graham Greebe, Böll may have read Synge before he first visited Achill. Böll first travelled to Achill Island in the early 1950s, travelling by train from Dublin to Westport with his family. The details of this visit, along with his observations of Irish ways and customs – from tea drinking to priests wearing safety pins to the popularity of ice cream – are recorded with humorous detail in his Irish Journal. 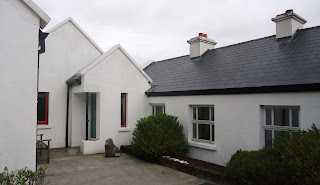 Life on Achill in the 1950s gave him plenty of material to indulge his penchant for the absurd and the incongruous, not least the casual relationship with time. His first book was called The Train Was On Time, and that first train from Dublin arrived in Westport right on time.

Böll was soon introduced to the Irish saying: “When God made time he made plenty of it.” Achill Island, with its “classless society” and its casual attitude to time, held an immense appeal for him.

Recounting the time he went to a movie in Keel, Böll noted that regardless of the advertised start time the movie could only begin when all the priests – “the local ones as well as the ones on holiday” – were assembled in full strength.

Sixty years later I wonder if 80 people will be kneeling at Mass in the same church in Achill tomorrow morning.

Heinrich Böll and his family continued to travel to Achill during the 1950s and 1960s, living in a cottage in Dugort, close to Saint Thomas’s Church. Heinrich Böll died on 16 July 1985. Thanks to his family, the Böll Stiftung in Cologne, and Mayo County Council, his cottage is now an artists’ residence, providing a short-term retreat for writers, poets and artists, and it is open to the public from 2 to 5 p.m. this afternoon [Saturday 4 May 2013].