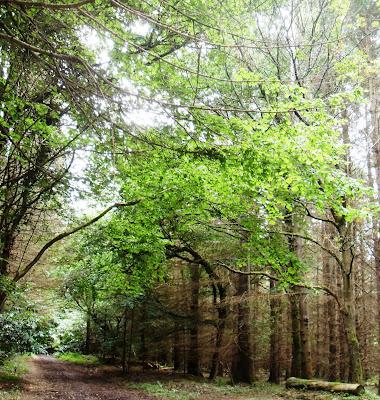 ‘The last year’s leaves are on the beech ... The Easter bells enlarge the sky,’ John Betjeman (Photograph: Patrick Comerford)

My choice of a Poem for Easter this morning is ‘Loneliness’ by the former English poet laureate, John Betjeman (1906-1984).

John Betjeman’s witty tone often led to him being dismissed by critics as a light-weight poet. But beneath the surface, his poems are often profoundly serious.

Recurrent themes in his poems include religion, social class, the English countryside, loneliness and death. The chilling poem ‘Loneliness’ is from Betjeman’s 1974 collection, A Nip in the Air, and while it speaks of how” The Easter bells enlarge the sky,” it shows Betjeman’s deep fear of death.

Betjeman was a life-long Anglo-Catholic, but towards the end of his life, his belief in God waxed and waned. In ‘On a Portrait of a Deaf Man,’ written after his father’s death, he writes:

You, God, who treat him thus and thus,
Say ‘Save his soul and pray.’
You ask me to believe You and
I only see decay.

He suffered nightmares about Hell because he was married to one woman (Penelope Chetwode) but was living with another (Elizabeth Cavendish). When he died in Trebetherick on 19 May 1984, he was buried near the south side of the local parish church, Saint Enodoc’s.

The last year’s leaves are on the beech:
The twigs are black; the cold is dry;
To deeps beyond the deepest reach
The Easter bells enlarge the sky.
O ordered metal clatter-clang!
Is yours the song the angels sang?
You fill my heart with joy and grief –
Belief! Belief! And unbelief...
And, though you tell me I shall die,
You say not how or when or why.

Indifferent the finches sing,
Unheeding roll the lorries past:
What misery will this year bring
Now spring is in the air at last?
For, sure as blackthorn bursts to snow,
Cancer in some of us will grow,
The tasteful crematorium door
Shuts out for some the furnace roar;
But church-bells open on the blast
Our loneliness, so long and vast.

Canon Patrick Comerford is Lecturer in Anglicanism, Liturgy and Church History, the Church of Ireland Theological Institute, and a canon of Christ Church Cathedral, Dublin