With the Saints through Advent (21): 20 December, Saint Ignatius of Antioch 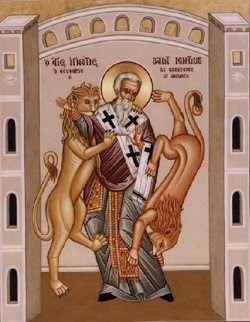 In the midst of all th reorts on the present conflicts in Syria, it almsot passed unnoticied that the Greek Orthodox Patriarch of Antioch, Patriarch Ignatius IV, died earlier htis month [5 December 2012] in Saint George’s Hospital in Beirut, Lebanon following a stroke.

The Patriarch of Antioch is the third most senior figure in the Ortrhidix Church, following the Patriarchs of Constantinople and Alexandria.

His successor, Patriarch John X (Yazigi) of Antioch and All The East, who was elected last Monday [17 December 2012], was Abbot of Balamand before becoming Metropolitan of Europe in one of the fasting-growing Orthodox Churches which traces its history back to the Apostle Peter and Saint Ignatius of Antioch.

Today [20 December] is without commemoration in most calendars of the Western Churches. But in the Eastern Orthodox Church 20 December is observed as the feast day of Saint Ignatius of Antioch.

But look at the men who have these perverted notions about the grace of Jesus Christ which has come down to us, and see how contrary to the mind of God they are ... They even absent themselves from the Eucharist and the public prayers because they will not admit that the Eucharist is the self-same body of our Saviour Jesus Christ which suffered for our sins, and which that Father in his goodness afterwards raised up again. Consequently, since they reject God’s good gifts, they are doomed in their disputatiousness. (Smyrnaeans, 6-7, Andrew Louth.)

In the same passage, he draws clear connections between this rejection of the Incarnation of Christ and their shunning of the social obligations of Christian faithfulness:

But look at the men who have those perverted notions about the grace of Jesus Christ which has come down to us, and see how contrary to the mind of God they are. They have no care for love, no thought for the widow and orphan, none at all for the afflicted, the captive, the hungry or the thirsty (Smyrnaeans, 6.2, Andrew Louth.)

Saint Ignatius of Antioch (ca 35-ca 98/117), who is honoured as an apostle, bishop and martyr, is said to have known Saint John the Evangelist personally and converted to Christianity at an early age. A mediaeval legend claimed he was the child Christ took up in his arms (see Mark 9: 35). Earlier traditions say he succeeded Peter and Evodius ca 68 as the third Bishop or Patriarch of Antioch.

During the reign of the Emperor Trajan, he was arrested, condemned to death, and sent to Rome for execution.

On his way to martyrdom in Rome, Saint Ignatius was accompanied by his companions, Philo, a deacon of Tarsus, and Rheus Agathopus, a Syrian. Despite all this, his journey was a kind of triumph. News of his fate, his destination, and his probable itinerary had gone swiftly before. At several places along the road his fellow-Christians greeted him with words of comfort and reverential homage.

On that journey, he was taken from Antioch through Tarsus or Attalia, Laodicea, Philadelphia and Sardis, and finally to Smyrna, where the bishop was Saint Polycarp, his fellow-disciple in the school of Saint John the Divine.

His time in Smyrna was protracted, and the representatives of Churches throughout Asia Minor came to meet him and to comfort him. They included representatives of the churches in Ephesus, Magnesia and Tralles. Saint Ignatius addressed letters from Smyrna to each of these communities and to the Church in Rome, exhorting them to obedience to their bishops, and warning them to avoid heresy.

His principal concerns in the letters include the importance of maintaining Christian unity in love and sound doctrine; warnings against factionalism and against the heresy of Docetism – the belief that Christ was not fully human and did not have a material body or really suffer and die; the role of the bishop as the focus of Christian unity; and Christian martyrdom as a a glorious privilege, to be grasped eagerly.

From Smyrna, Saint Ignatius was taken to Troas, where he wrote letters to the Churches of Philadelphia and Smyrna and to Saint Polycarp. 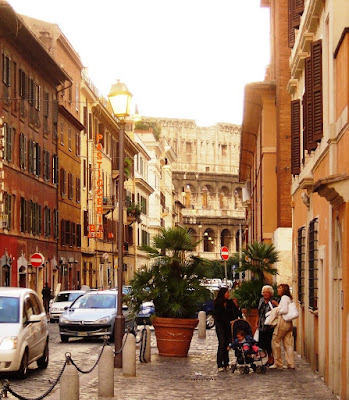 The view of the Coliseum from the Basilica of San Clemente (Photograph: Patrick Comerford)

Shortly after his arrival in Rome, Saint Ignatius was martyred in the Coliseum. His remains were carried back to Antioch by his companions, Philo of Tarsus and Rheus Agathopus, and were buried outside the city gates. They were moved by the Emperor Theodosius II to the Tychaeum, or Temple of Tyche, which had been converted into a church dedicated to Saint Ignatius.

In 637, his relics were moved to the Basilica of San Clemente in Rome.

At times, Patristic scholars have debated the authenticity of the Ignatian letters. Each particular letter has had its apologists and its opponents. Each has been favoured to the exclusion of all the others, and all, in turn, have been collectively rejected, especially by Calvin. In violent language (Institutes, 1-3), Calvin repudiates all the letters, which completely contradict his own views on ecclesiology and church government. However, their authenticity was defended by the leading Anglican theologians, including John Whitgift, Richard Hooker and Lancelot Andrewes.

In general, Roman Catholic and Anglican scholars accept his letters to the Ephesians, Magnesia, Tralles, Rome, Philadelphia and Smyrna and to Saint Polycarp. Joseph Lightfoot’s five-volume edition of the Apostolic Fathers remains the definitive work on the provenance and text of the writings of Saint Ignatius of Antioch. He writes:

The Ignatian Epistles are exceptionally good training ground for the student of early Christian literature and history. They present in typical and instructive forms the most varied problems, textual, exegetical, doctrinal and historical. One who has thoroughly grasped these problems will be placed in possession of a master key which will open to him vast storehouses of knowledge.

The 42-hectare Kültürpark was laid out on the ruins of the Greek quarter of Smyrna ... while Saint Ignatius was in Smyrna as a prisoner, representatives of Churches throughout Asia Minor came to meet him and to comfort him (Photograph: Patrick Comerford)

In his letters, Saint Ignatius discusses ecclesiology, the sacraments, and the role and authority of bishops.

He identifies a local church structure of bishops, priest and deacons, with the bishop in the place of God, the priests in the place of Apostles, and the deacons serving as Christ served:

Let the bishop preside in the place of God, and his clergy in the place of the Apostolic conclave, and let my special friends the deacons be entrusted with the service of Jesus Christ, who was with the Father from all eternity and in these last days has been made manifest. – To the Magnesians, 6 (Andrew Louth).

In his letter to the Magnesians, Saint Ignatius weaves together his Trinitarian faith and his understanding of the threefold order of bishop, priest and deacon, and links his Christology with his ecclesiology:

Do your utmost to stand firm in the precepts of the Lord and the Apostles, so that everything you do, worldly or spiritual, may go prosperously from beginning to end in faith and love, in the Son and the Father and the Spirit, together with your most reverend bishop and that beautifully woven spiritual chaplet, your clergy and godly minded deacons. Be as submissive to the bishop and to one another as Jesus Christ was to his Father, and as the Apostles were to Christ and the Father; so that there may be complete unity, in the flesh as well as the spirit. – To the Magnesians, 13 (Andrew Louth)

Saint Ignatius claims to have spoken in some of the Churches through the inspiration of the Holy Spirit. In an early Patristic poem, he teaches the deity of Christ and his human and divine natures:

“There is only one Physician –

Very Flesh, yet Spirit too;
Uncreated and yet born;
God-and-Man in One agreed;
Very-Life-in-Death indeed;
Fruit of God and of Mary’s seed;
At once impassible and torn
By pain and suffering here below:
Jesus Christ, whom as Lord we know.” – To the Ephesians, 7 (Andrew Louth).

He refers to the Church as a “Eucharistic community” which realises its true nature when it celebrates the Eucharist, and defines the Church as the local community gathered around its bishop, celebrating the Eucharist. He is the second writer after Clement to mention Saint Paul’s Epistles, and he is also responsible for the first known use of the Greek word katholikos (καθολικός), meaning “universal,” “complete” and “whole,” to describe the Church:

The sole Eucharist you should consider valid is the one that is celebrated by the bishop himself, or by some person authorized by him. Where the bishop is to be seen, there let all his people be; just as wherever Jesus Christ is present, we have the catholic Church. Nor is it permissible to conduct baptisms or love-feasts [the Eucharist] without the bishop. On the other hand, whatever does have his sanction can be sure of God’s approval too. This is the way to make certain of the soundness and validity of anything you do. – To the Smyrnaeans 8 (Andrew Louth).

Saint Ignatius, therefore, is the first known Christian writer to emphasise loyalty to a single bishop in each city, who is assisted by both presbyters (priests) and deacons. He also stressed the value of the Eucharist, calling it “a medicine to immortality.” Saint Ignatius “thought of the Church as a Eucharistic society which only realised its true nature when it celebrated the Supper of the Lord, receiving His Body and Blood in the Sacrament.” [Ignatius, quoted in Metropolitan Kallistos (Timothy) Ware, The Orthodox Church, p. 21.] 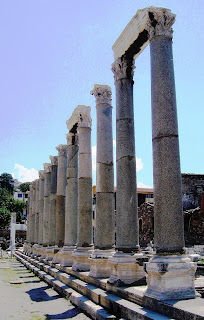 A colonnade of 14 Corinthian columns on the west side of the Stoa of Smyrna, the only surviving classical site in Izmir. Saint Ignatius of Antioch wrote four of his letters, including one to the Church in Smyrna, while he was a prisoner in Smyrna (Photograph: Patrick Comerford)

In the Calendars of the Western Churches, including the Roman Catholic Church, the Episcopal Church (TEC) and Common Worship of the Church of England, Saint Ignatius of Antioch is generally commemorated on 17 October.

Almighty God, we praise you for your bishop and martyr Ignatius of Antioch, who offered himself as grain to be ground by the teeth of wild beasts that he might present to you the pure bread of sacrifice. Accept the willing tribute of our lives, and give us a share in the pure and spotless offering of your Son Jesus Christ; who lives and reigns with you and the Holy Spirit, one God, for ever and ever.