A week in Rethymnon as Crete
celebrates 100 years of enosis 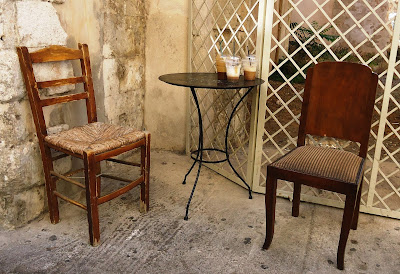 Coffee for two? Or three? A table on the corner of Ethn. Anistasseos and Tsouderon streets in Rethymnon this afternoon (Photograph: Patrick Comerford, 2013)

I arrived back in Rethymnon this afternoon [30 August 2013], and for the next week I am staying once again on Tsouderon Street in Pepi Studios – a small hotel in this charming old-world town on the north coast of Crete.

Tsouderon Street is the heart of a small coastal city that many regard as one of the best-preserved Venetian Renaissance cities in Greece.

I first stayed in this town a quarter of a century ago in 1988, and I was back in Rethymnon for a week last summer. 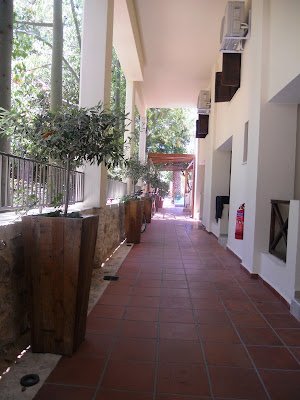 The entrance to Pepi Studios ... I am staying here for the next week (Photograph: Patrick Comerford)

Pepi Studios is a small, quiet hotel at No 22 Tsouderon Street, housed in a charming old Venetian building in a side street off Arkadiou Street.

The entrance to the hotel is squeezed between an ATM for the local branch of the National Bank of Greece, which is housed in an impressive neoclassical villa, and Bistro 22, which is both a café and a bar, and in the morning it becomes the breakfast room for Pepi’s guests. 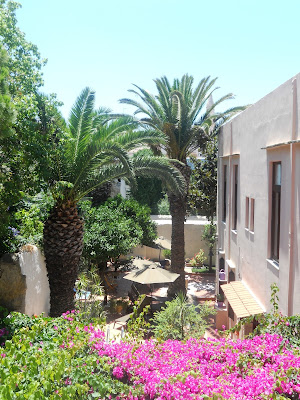 The charming gardens and the pool at Pepi Studios (Photograph: Patrick Comerford)

Pepi has 14 studios and four maisonettes, arranged around a charming garden and a small outdoor swimming pool. Each studio has a kitchen, free Wi-Fi internet and a flat screen TV with satellite channels.

We are staying Studio 7, with a balcony looking straight down onto Tsouderon Street. Behind the white walls and gardens around the pool, I can see the library behind Aghia Barbara Church, and the minaret of the former Valide Sulana Mosque juts up above the roofs of the shops and houses to the south. 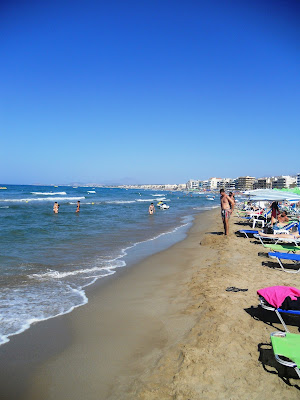 This afternoon, we walked down to the corner with Arkadiou Street, and then took a lazy ramble through the streets of the old town. I am only a few hundred metres walking distance from both the old harbour and the town’s lengthy, sandy beach, which stretches for miles to the east as far as one can see.

The fortezza and the old Venetian harbour are nearby, and there are museums, galleries and old Venetian and Ottoman buildings around every corner, with tavernas, restaurants, cafés and bars on every street, corner and square.

This year in Crete, people are celebrating the one-hundredth anniversary of ένωσις (enosis) or Crete’s incorporation into the modern Greek state after two and half centuries of Ottoman rule. As part of the centenary celebrations and this year’s programme for Rethymnon’s Renaissance Festival, an adaptation of Patouchas by Ioannis Kondylakis is being staged in the Erofili Theatre in the Fortezza tonight. It tells the story of a young Cretan shepherd’s efforts to understand and conform to the social values of his parents’ village, recording the ways and mores of the Greek countryside.

Or, perhaps, this evening I’ll see if I can find some traditional Cretan music. The Renaissance Festival continues in Rethymnon until Sunday [1 September], and I hope to catch some of the remaining items on the programme, including an icon exhibition which opened in the Artillery Hall in the Fortezza the weekend before last [17 August 2013] and continues until Sunday.

Last year, I spent some time photographing and cataloguing the fountains, mosques and doorways of Rethymnon. But the town also has numerous Byzantine churches and monasteries, enchanting Venetian monuments and palazzos, Ottoman balconies, and narrow alleyways, quiet squares and side streets that are oozing with charm and curiosity. 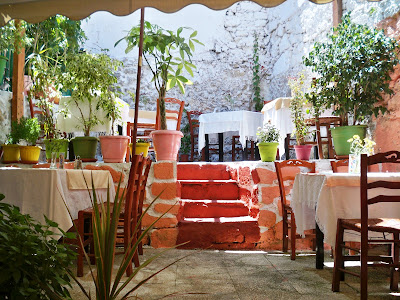 Akri, one of my favourite restaurants, is a charming taverna in a quiet corner off Kornaru Street (Photograph: Patrick Comerford)

During our stroll this afternoon, we had a late lunch in Akri, which has been one of my favourite restaurants since the 1980s. It is a charming taverna in a quiet corner off Kornaru Street, offering traditional, home-made Cretan dishes. The courtyard has patches of green everywhere with a refreshing scent of jasmine and with small tables under a wooden trellis with dripping, overhanging vines.

And during the coming week I plan to find time for long, lingering meals with friends, walks on the beach, time to visit the olive groves and the monasteries in the mountains above Rethymnon, and time to photograph the unique Ottoman hanging wooden balconies in this town. 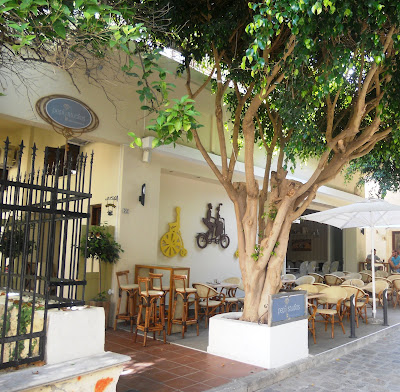 Bistro 22 on Tsouderon Street ... Pepi Studios are just behind and above the bar (Photograph: Patrick Comerford) 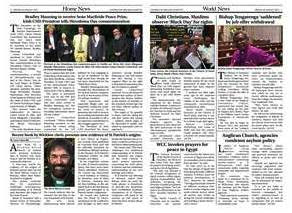 This morning’s edition of the Church of Ireland Gazette [30 August 2013] carries a half-page report and a three-column photograph on page 6 following my address as President of the Irish Campaign for Nuclear Disarmament (Irish CND) at the annual Hiroshima Day commemorations in Merrion Square, Dublin, earlier this month [6 August 2013].

The President of the Irish Campaign for Nuclear Disarmament (Irish CND), Canon Patrick Comerford, has announced that this year’s Seán MacBride Peace Prize is to go to the jailed US whistle-blower, Bradley Manning.

During the commemoration, a wreath was laid at the Cherry Tree by the Lord Mayor of Dublin, Cllr Oisín Quinn. Other speakers included the poet, Hugh McFadden; Tomoko Matsumoto, First Secretary of the Japanese Embassy; and Dr David Hutchinson Edgar, a parishioner of Tallaght.

The prize is presented each year by the IPB and Canon Comerford said that this year’s award to Bradley Manning was “for his courageous actions in revealing information about US war crimes.”

Canon Comerford continued: “When Bradley Manning revealed to the world the crimes being committed by the US military, he was engaging in an act of obedience to this high moral duty. Already, he has been nominated for the Nobel Peace Prize.

“Bradley Manning has also revealed the whereabouts of US tactical nuclear weapons, as well as the location of key US military facilities.

“War operations, and especially illegal ones, are frequently conducted under the cover of secrecy. To penetrate this wall of secrecy by revealing information that should be accessible to all is an important contribution to the struggle against war.”

The President of Irish CND described the heavy sentence facing Bradley Manning as “not only unjust but also having a very negative effect on the right to freedom of expression that the US claims to uphold.”

Canon Comerford asserted: “It is to the shame of Ireland that neither of these modern-day heroes, holders of the banner of morality in the immoral nuclear age, has not been offered asylum in this country.

“We ought to be grateful to them, each for taking the risk that comes and raising … subjects which ought to be discussed in public and which no statesman cares to approach.”