A tiny corner of Cambridge, and Lichfield, and Russia, in Collon, Co Louth 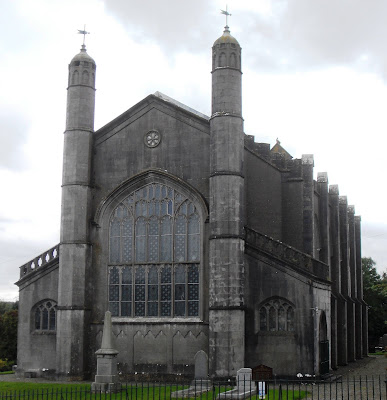 Collon Church, Co Louth ... modelled on the chapel of King’s College, Cambridge, and dedicated 200 years ago in 1811 (Photograph: Patrick Comerford, 2011)

On my way back to Dublin from Castle Leslie, Co Monaghan, yesterday, I stopped in the small Co Louth village of Collon, close to the border with Co Meath, to look at the Church of Ireland Parish Church.

Councillor Leonard Hatrick from Louth village kindly opened the church, which was built in 1811-1813 in the style known as Tudor perpendicular gothic. The design was inspired by the chapel of King’s College, Cambridge, and the seating, like King’s and other Cambridge chapels, is arranged in collegiate style, with the pews arranged in rows facing each other.

The building of the church was funded by the local landlord, Thomas Henry Foster of nearby Oriel Temple, the only son of John Foster, the last speaker of the Irish House of Commons. Thomas Foster was educated at Eton and Cambridge, which may explain the inspiration for Beaufort’s design of the church. Foster was MP for the neighbouring borough of Dunleer from 1792 to 1800. After the Act of Union, he was a Governor of Co Louth (1803-1843) and MP for Drogheda, (1807-1812), and Co Louth (1821-1824).

The church was designed by the Revd Daniel Augustus Beaufort (1739-1821), who was the Rector of Collon from 1789 and 1821. The foundation stone of the Church of the Nativity of the Blessed Virgin Mary was laid 200 years ago in July 1811, and the first service in the church took place on 17 September 1815.

As far as I know, the only other church in Ireland that was inspired by King’s College Chapel is also in Co Louth – but Saint Patrick’s Pro-Cathedral in Dundalk is a generation later, being designed by Thomas Duff of Newry in 1834. Saint Gregory’s, the Church of Ireland parish church in Glenealy, Co Wicklow, which was built in 1791-1792 by the Tighe Family of Rosanna, was modelled on the old chapel in Saint John’s College, Cambridge. Similar collegiate-style seating can be seen in the chapel of Trinity College Dublin and in Holy Trinity Cathedral, Downpatrick. 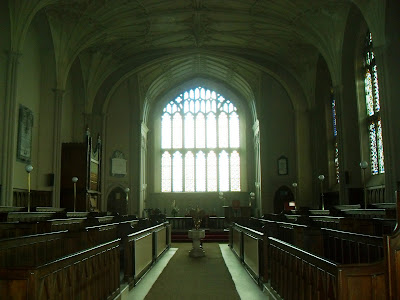 The interior of Collon Church, Co Louth ... a replica of the chapel of King’s College, Cambridge, and dedicated 200 years ago in 1811 (Photograph: Patrick Comerford, 2011)

An amateur architect, Beaufort designed or improved several houses and churches. He was born in London, the only child of the Revd Daniel Cornelius Beaufort, a Huguenot refugee and Calvinist minister, and his wife, Esther Gougeon, from La Rochelle. The elder Beaufort moved to Ireland in 1747 through the patronage of the Lord Lieutenant, the Earl of Harrington, and was the Rector of Navan, Co Meath.

After graduating from Trinity College, Dublin, in 1759, the Revd Daniel Augustus Beaufort was ordained in 1763 and succeeded his father as Rector of Navan from 1765 to 1818. In 1767, he married Mary Waller of Allenstown. His son, Admiral Sir Francis Beaufort (1774-1857), gave his name to the Beaufort Scale, while his eldest surviving daughter, Fanny, married as his fourth wife Richard Lovell Edgeworth (1744-1817) of Edgeworthstown, Co Longford.

In 1790, Beaufort also became Vicar of Collon. Two years later he created and published a new map of Ireland. His other interests included architecture, topography and agriculture. 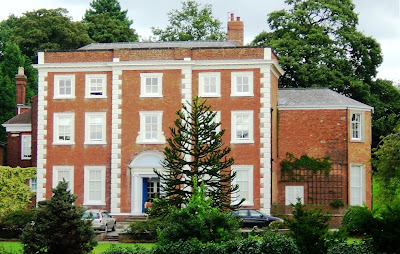 Beaufort’s son-in-law, Richard Lovell Edgeworth is remembered as an author, inventor and amateur architect. He was a member of the Lunar Society in Birmingham, along with many of the eminent scientists in the English Midlands at the turn of the 18th and 19th centuries, including Erasmus Darwin, Joseph Priestly and James Watt. While he was active in the Lunar Society, Edgeworth also lived at Stowe House in Lichfield. 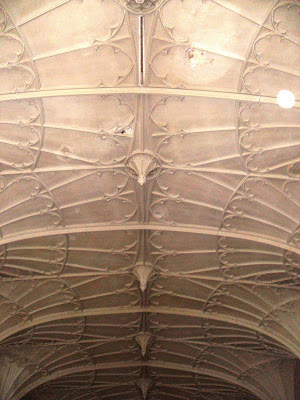 The lath and plaster imitation fan-vaulting of the ceiling in Collon Church is the work of William Edgeworth (Photograph: Patrick Comerford, 2011)

Despite some alterations, the interior of the church in Collon has been described by Nigel Yates as one of the most spectacular of the surviving late 18th and early 19th century collegiate interiors in Ireland.

Richard Lovell Edgeworth’s son and Beaurfort’s grandson, William Edgeworth (1794-1829) was responsible for the construction of the lath and plaster imitation fan-vaulting of the ceiling in Collon Church. This plaster fan vault ceiling is also a direct copy of the stone vault ceiling in King’s College Chapel.

The church has a broad nave and shallow chancel. The nave is fitted with five rows of tiered collegiate seating on each side, with large family pews at the west end.

The sanctuary, with its original rails, is raised four steps above the level of the nave. The loose benches, which may have been placed across the middle of the space between the stalls, are now placed against their fronts.

The pulpit and reading desk were originally placed in front of the altar but were dismantled and replaced by a new pulpit, clergy desks and organ, but these alterations have only had a marginal impact on the interior.

The painted glass in the east window and the five windows in the south wall of the nave was designed by Beaufort’s daughter, Louisa, and the six windows were furnished in 1829 by Edward Lowe (ca 1774-1857). The organ, installed in 1894, is by Carroll and Batchelor. At the same time, a new porch was built by John Abraham at the west end, and pulpit was moved from the back to the front of church.

The church has superb acoustics and which is used from time to time for Baroque concerts. 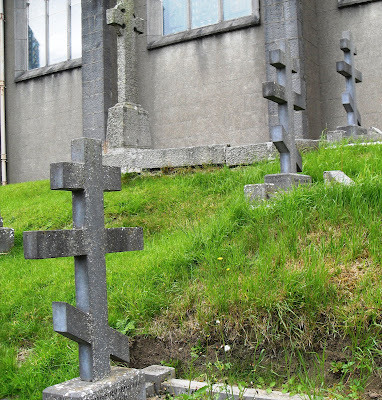 At the front of the church, there is a memorial to the men of the parish who died in 1914-1918 during World War I, inscribed with the name of Lieutenant James Samuel Emerson, VC, who was born in Collon.

But the most unusual graves in the churchyard are on the slopes on north side, where there are three graves with Russian Orthodox crosses and inscriptions in Russian. The graves belong to Father Nicholas Couriss, his wife, and their young son who died tragically in the 1930s.

The lower grave is that of Father Nicholas, who was a member of the Russian Orthodox Church, who was born in St Petersburg. He was an officer in the Romanov Imperial Guard and during the Russian Revolution he joined the White Army. He was reputed to have been involved in a plot to rescue the Russian Tsar and his family in Yekaterinburg in July 1918, but he always refused to speak of his role.

He spent eight years in Greece after fleeing Russia. He moved to Ireland around 1930 with other Russian émigrés and settled in Collon, where he rented the former courthouse in 1934 and became a pioneer in the mushroom-growing industry.

He started a Russian language school there around 1946. The school began with one pupil, and within four years it had 50 students, with the exiled captain assisted by his wife Xenia and his cousin Prince Alexander Lieven, then 75.

In 1950, both the Sunday Express and the Drogheda Independent reported that for 12 hours a day only Russian voices could be heard in the old courthouse in Collon, where Russian classes were taught by Nicholas Couriss, by then 55 and an Irish citizen. They reported that he used the language of the country he had fled to make a living and as a “Cold War” against the Soviet regime that had driven him into exile.

After the death of his wife Xenia, Nicholas Couriss studied theology and was ordained a priest in the Russian Orthodox Church-in-Exile in New York. The parish of Our Lady’s Holy Protection was established in Dublin in 1968 by the Russian Orthodox Church-in-Exile, with Father Nicholas as parish priest. He lived his last days at 45A Pembroke Lane, Dublin, where he also had a tiny chapel. When he died in August 1977, the chapel closed and he was buried in the churchyard in Collon.

At one point, is said, the Cambridge spies Kim Philby, Guy Burgess and Donald Maclean, visited Father Couriss and his school in Collon as part of their Russian language training. Of course, the Cambridge spies were all associated with Trinity College rather than King’s College. But I wonder, did they ever know of the connection between Cambridge and this corner of Co Louth?
Posted by Patrick Comerford at 17:00 1 comment: