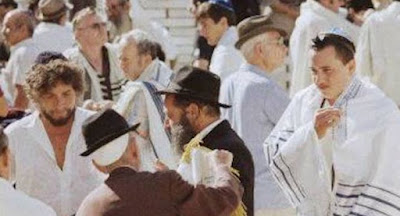 Praying in Pentecost 2021:
101, Saint Martin in the Bull Ring, Birmingham 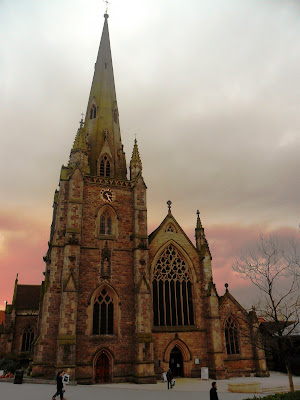 Saint Martin in the Bull Ring is 19th century Victorian Gothic revival on the outside, but inside has 12th and 13th century carvings and tombs (Photograph: Patrick Comerford) 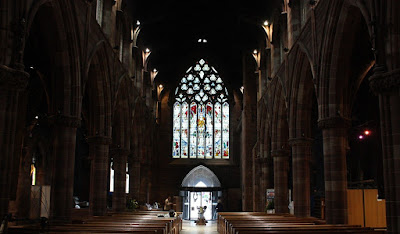 Inside Saint Martin in the Bull Ring, Birmingham

This morning (28 May 2021), my photographs are from the Church of Saint Martin in the Bull Ring, the original parish church in Birmingham. I have known this church since my teens, travelling between Birmingham and Lichfield, and have visited it occasionally when I have been in Birmingham for USPG meetings.

The name of Birmingham is Anglo-Saxon, but it is not known whether there was a church here at that time. When the new town of Birmingham was developed at the time of the Market Charter of 1166, Peter de Birmingham may have moved his manor house to the Moat Lane site and built Saint Martin’s as a new church.

The present Victorian church was built on the site of a 13th-century predecessor, which dated from 1263 or earlier. The church was enlarged in mediaeval times, with a lofty nave and chancel, north and south aisles and a north-west tower with a spire. By the mid-16th century, the church had a clock and chime maintained by the Guild of the Holy Cross at an annual cost of four shillings and four pence.

John Cheshire rebuilt 40 ft of the spire in 1781, which was strengthened by an iron spindle running up its centre for a length of 105 ft. It was secured to the sidewalls at every 10 feet by braces. Several metres from the top of the spire were replaced in 1801, when they were found to have decayed. The tops of the four pinnacles surrounding the main spire were also rebuilt. By 1808, the spire had been struck by lightning three times.

The brick casing was removed from the tower in 1853 by Philip Charles Hardwick, who added the open-air pulpit.

The church was demolished in 1873 and rebuilt by the Birmingham architect Julius Alfred Chatwin (1830-1907), who retained the earlier tower and spire. During the demolition, mediaeval wall paintings and decorations were found in the chancel, including one showing the charity of Saint Martin dividing his cloak with a beggar. Two painted beams were also found behind the plaster ceiling.

The exterior is built of rock-faced Grinshill stone. The interior is of sandstone with an open timber roof, which shows the influence of the great hammerbeam roof of Westminster Hall, where Chatwin had worked under Charles Barry and AWN Pugin. Chatwin also enlarged Saint Philip’s Cathedral Birmingham in 1884-1888 (see this Prayer Diary, 13 May 2021).

The beams are decorated with fine tracery and end in large carvings of angels. The roof weights 93 tons (94.5 tonnes), spans 6.7 metres over the 30.4 metre long nave and is 18.2 metres high.

The Victorian floor tiles are by Minton and display the quartered arms of the de Bermingham family.

The Pre-Raphaelite window in the South Transept by Sir Edward Burne-Jones was made by William Morris in 1875. The West window is a copy made in 1954 of the window made by Henry Hardman in 1875 and destroyed in the Blitz.

The mediaeval-style stone statues on the north and west fronts were designed by Chatwin and sculpted by Robert Bridgeman’s of Lichfield. They depict King Richard I in commemoration of his visit to Birmingham ca 1189 confirming the market charter, and Saint Martin of Tours giving his cloak to a beggar.

The Rector of Saint Martin’s is the Revd Jeremy Allcock, and the Assistant Priests are the Revd Elsie Blair-Chappell and the Revd Abba Tiruneh. 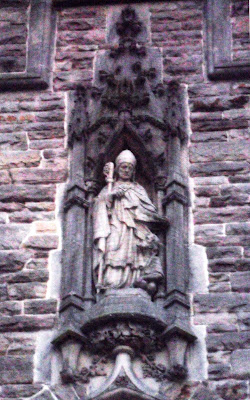 A statue of Saint Martin designed by JA Chatwin and sculpted by Bridgeman’s of Lichfield (Photograph: Patrick Comerford)

12 On the following day, when they came from Bethany, he was hungry. 13 Seeing in the distance a fig tree in leaf, he went to see whether perhaps he would find anything on it. When he came to it, he found nothing but leaves, for it was not the season for figs. 14 He said to it, ‘May no one ever eat fruit from you again.’ And his disciples heard it.

15 Then they came to Jerusalem. And he entered the temple and began to drive out those who were selling and those who were buying in the temple, and he overturned the tables of the money-changers and the seats of those who sold doves; 16and he would not allow anyone to carry anything through the temple. 17 He was teaching and saying, ‘Is it not written,

“My house shall be called a house of prayer for all the nations”?
But you have made it a den of robbers.’

18 And when the chief priests and the scribes heard it, they kept looking for a way to kill him; for they were afraid of him, because the whole crowd was spellbound by his teaching. 19 And when evening came, Jesus and his disciples went out of the city.

20 In the morning as they passed by, they saw the fig tree withered away to its roots. 21 Then Peter remembered and said to him, ‘Rabbi, look! The fig tree that you cursed has withered.’ 22 Jesus answered them, ‘Have faith in God. 23 Truly I tell you, if you say to this mountain, “Be taken up and thrown into the sea”, and if you do not doubt in your heart, but believe that what you say will come to pass, it will be done for you. 24 So I tell you, whatever you ask for in prayer, believe that you have received it, and it will be yours.

25 ‘Whenever you stand praying, forgive, if you have anything against anyone; so that your Father in heaven may also forgive you your trespasses.’

Let us have open minds and welcoming hearts in all we do. 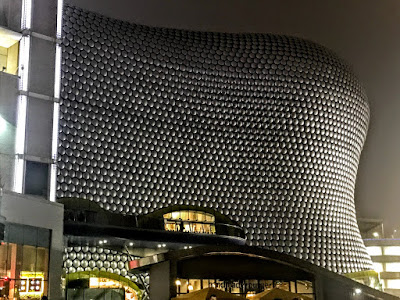