Even the glamorous and famous
need love and crave approval 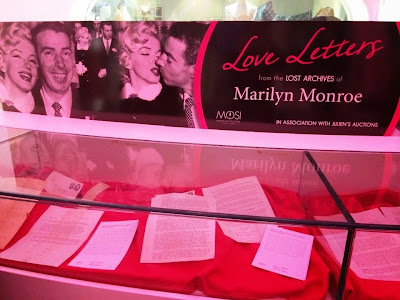 The exhibition on Marilyn Monroe runs for a week in Newbridge (Photograph: Patrick Comerford, 2014)

I was badly in need of a B12 injection this week, and the foggy, misty morning have been playing silly games with my lungs and my symptoms of sarcoidosis. I expected to have to queue a long time at my GPs after leaving work late yesterday evening, but to my delight I was seen quickly, and hope the injection takes effect soon.

Late this morning, two of us drove along the shores of the lakes at Blessington and Poulaphouca in West Wicklow and north Kildare. I had never been in Pulaphouca House beside the reservoir, and thought it might be an interesting place for lunch.

But by the time we arrived in seemed to be closed, and so we continued to drive along the shoreline, with the promise of a return visit.

The lakes and the reservoir were formed between 1937 and 1947 by damming the River Liffey at Poulaphouca as part of the Electricity Supply Board’s project to build a second Irish hydroelectric station, following the building of Ardnacrusha on the River Shannon.The reservoir is one of two major sources of Dublin’s water supply, the other is the Vartry Reservoir in east Wicklow.

Between 1938 and 1940, 76 houses were demolished, and the bridges at Humphreystown, Baltyboys and Burgage blown up, in anticipation of the flooding of the valley for the Poulaphouca hydroelectric power station.

We returned back by Russborough House to Blessington, and then decided to turn down to Naas and to continue on to Newbridge, Co Kildare, where we had lunch in Silver Restaurant before visiting the Museum of Style Icons in the Newbridge Silverware Visitor Centre. 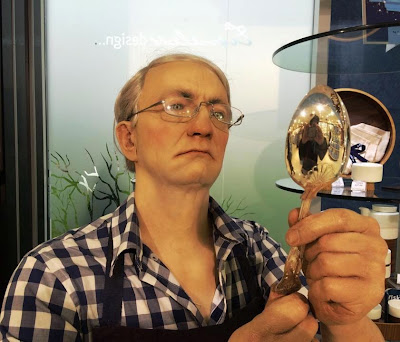 I have little or no interest in style, fashion or jewellery, but Ryan Tubridy had been talking on his show this morning about the latest exhibition on Marilyn Monroe, and this is certainly the sort of museum I have never visited before.

I was surprised to learn that the Museum of Style Icons is now rated as one of the top five free tourist attractions in Ireland. The museum regularly hosts visiting collections from around the world and hosts numerous collections and artefacts relating to the lives of the Stars of the Silver Screen and many modern day artists. 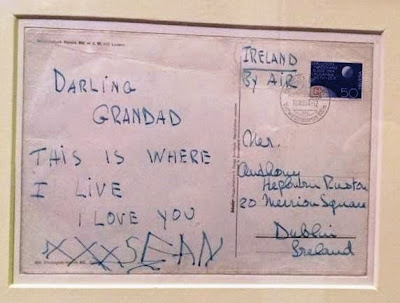 A postcard to Audrey Hepburn’s father in Dublin from his grandson in Switzerland (Photograph: Patrick Comerford, 2014)

I never knew that Audrey Hepburn’s father once lived in Merrion Square Dublin; I had forgotten how young Princess Diana was when she married; and I wondered in an idle but humorous moment why the items relating to Elizabeth Taylor were nor exhibited beside those from Michael Jackson.

‘The Lost Archives of Marilyn Monroe’ is an exhibition for one week only in Newbridge. The exhibition began today (21 November) and continues until next Friday (28 November).

This is the only European exhibition of the items before they are auctioned in Hollywood on 5 and 6 December. The exhibit includes a selection of love letters sent to her and that were found under her bed after she died. 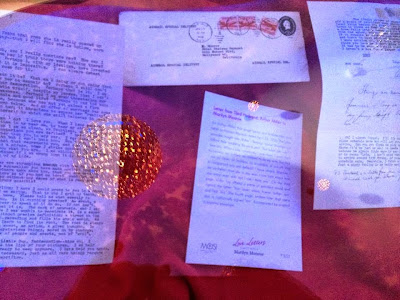 The collection is a remarkable look into the private life of Marilyn Monroe and features many personal items never before seen by the public. This collection was originally given to her mentor and coach Lee Strasberg who later were given as gifts to a friend. They include love letters, photographs and personal items, and these mementos offer a rare glimpse into her private life.

The collection was stored away until recently and includes love letters written to Marilyn Monroe from her third husband Arthur Miller. These sensitive and moving love letters, written during their courtship and marriage, are personal, emotional and captivating, and in these letters Arthur Miller expresses his love and encourages a despairing Marilyn Monroe.

It was a step back in time, but also a reminder of how even the glamorous and famous need love and crave approval.

Posted by Patrick Comerford at 22:42 No comments:

The Galway Barrister, Francis Comerford, BL, is one of seven new judges in the Circuit Court nominated by the Government this week.

The new judge was educated at University College Galway (now NUI Galway) and at the King’s Inns, and was called to the Bar in 1985.

At present, Judge Comerford practices on the Western Circuit and he has, wide experience in many areas of law including criminal, land law, personal injuries and family law.

He has previously lectured in various law courses, in particular the law of evidence, at UCG.

Judge Comerford is married to Caroline Phelan. He is the son of Dr Francis Rory Comerford, who was Vice-Dean of the Medical Faculty at UCG, and the Dr Philomena (O’Toole) Comerford, a lecturer in Anatomy. 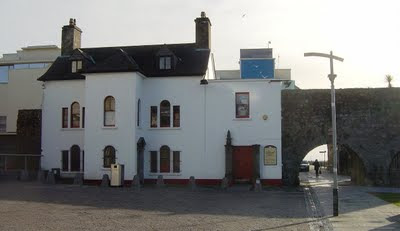 Comerford House, near Spanish Arch, Galway: donated to Galway City by the Comerford family and for a time the home of the Galway City Museum (Photograph: Patrick Comerford)

But law is part of the tradition of this branch of the Comerford family. The new judge’s uncle, Henry Comerford, is a well-known Galway solicitor. He was born in Dublin in 1936, and was educated at Castleknock College, Dublin (1954), and at UCD and UCG. He qualified as a solicitor in 1963, and joined the family practice in Galway established by his father, William JV Comerford.

William was also a well-known local historian in Co Galway, and he believed his branch of the Comerford family was descended from the Comerford family of Inchiholohan, Co Kilkenny. His historical papers included: “Some notes on the Borough of Tuam and its records, 1817–1822,” in the Journal of the Galway Archaeological and Historical Society. He was a founding member of the Old Tuam Society in 1942. He moved to Comerford House, beside the Spanish Arch, Galway, in the 1950s, but when he retired in the 1970s he moved to Dublin, where he died.

Henry Comerford is the author of the standard reference books on fisheries legislation in Ireland. In the 1950s, he was a member of the Radio Eireann Players, and featured in many broadcast plays, including Denis Johnston’s The Moon on the Yellow River. Later he acted with the Gate and the Gas Company Theatre, Dun Laoghaire, and he had two plays produced in the Peacock Theatre.

In the 1981 General Election, he stood unsuccessfully for the Dail as a Fine Gael candidate.

Posted by Patrick Comerford at 20:55 No comments: