Night reflections of Beckett
and bankers on the river 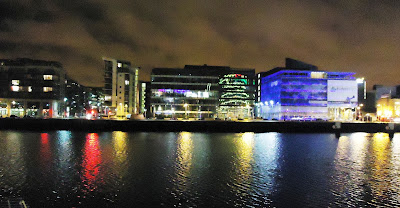 When we were leaving Leonard Cohen’s concert in the O2 at the Point in Dublin on Wednesday [11 September 2013], it was a bright clear night. It seemed hundreds of people were all in search of the few available taxis.

Certainly, the time we were leaving, the last 15 bus had left the Quays for the southern suburbs. The choices were minimal: either join the scrum, and hope to get a taxi over the next half hour; or join the throng heading east towards the city centre, but enjoy the stroll along the quays, with their bright lights and reflections.

The scene before us on Wednesday night was very different from Tuesday on the previous week when we had sat on a terrace at the Sun Set Taverna behind the Fortezza, watching the sun set in the sea to the west of Rethymnon.

This Wednesday night, from quite a distance, we could see the encircling lights of the Convention Centre on the north side of the river reflected on the buildings on the south side.

By the time we reached the Convention Centre, the hoops seemed very dim in comparison with their reflections on the opposite side. 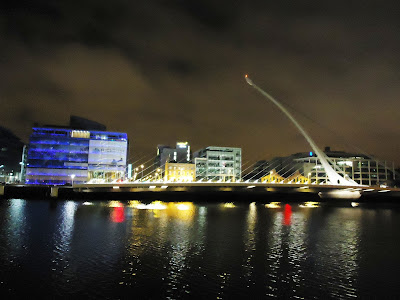 For the first time, I saw Santiago Calatrava’s Samuel Beckett – which links Guild Street and the North Wall on the north side and Sir John Rogerson’s Quay on the south side – opened through an angle of 90 degrees, so that ships could pass through.

The elegant sight was worth watching, but the inconvenience forced many pedestrians to push on further east.

The Jeannie Johnson, with its sails furled up, look majestic, and in the dark the only noticeable blight on the landscape was the abandoned, skeletal hulk of the would-be headquarters of Anglo-Irish Bank, a monument to the crass politicians and greedy bankers who continue to sneer at the public, as if we are to blame for their failures. 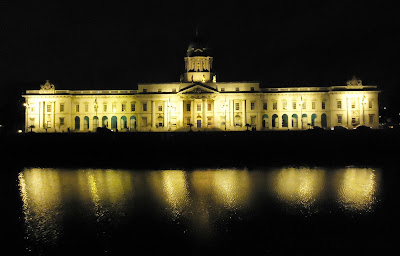 The Custom House reflected in the waters of the River Liffey on Wednesday night (Photograph: Patrick Comerford, 2013)

When we got to the Irish Financial Services Centre (IFSC), we crossed the river to catch the reflections of the Custom House shining in the River Liffey.

By now, the Luas works, the lark of street lighting and the night’s darkness made the south stretch between Tara Street station and O’Connell Street Bridge treacherous for the pedestrians trying to figure it where it was safe to walk. 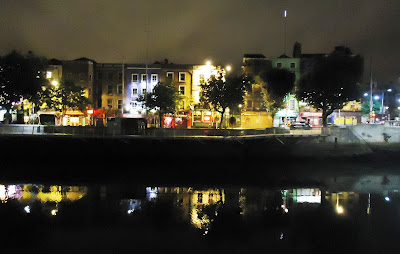 Bachelors’ Walk and the light at the tip-top of the Spike reflected in Liffey at Aston Quay (Photograph: Patrick Comerford, 2013)

We crossed the junction at O’Connell Bridge, D’Olier Street and Westmoreland Street to Aston Quay, where the reflections in the river now were the colourful buildings on Bachelors’ Walk and the light at the top-top of the Spike.

There we caught a taxi, and it was after midnight before we got home.