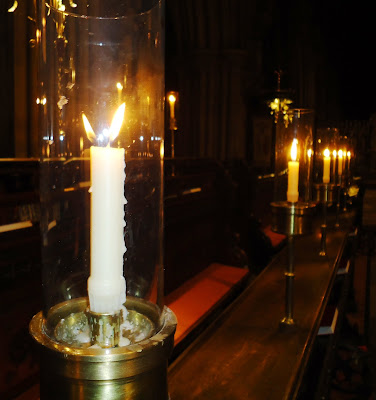 Candlelight in the choir stalls and chapter stalls for Evensong in Lichfield Cathedral this evening (Photograph: Patrick Comerford, 2012)

I am spending a few days in Lichfield this week, as a personal retreat, as time for reflection and prayer, as quiet time for time for walks by trees and pools, as time to meet friends and browse in bookshops, and as time to thank God for my own faith which was nourished and encouraged in this cathedral city when I was in my late teens and early twenties.

After arriving at Birmingham International and taking the train through Birmingham New Street, the first place to stop was the chapel of Saint John’s Hospital in Saint John Street.

Afternoon was moving to evening, and the autumn dusk was turning to darkness. Inside the chapel, there were few lights, but sitting in the tranquil peace this evening I recalled and gave thanks for that first experience at the age of 19 that led me on the pilgrimage that continues through life more than 40 years later, and that promises to continue.

After coffee in Nero on Bore Street, we walked up through Dam Street, passing Speakers Corner and crossing the Minster Pool to the Cathedral Close for Choral Evensong in Lichfield Cathedral.

We sat in the chapter stalls this evening for Evensong, which was led by the Precentor, Canon Wealands Bell, and the lessons were read by the Dean, the Very Revd Dr Adrian Dorber. In the prayers, we remembered Leonard, the sixth century hermit, and William Temple, Archbishop of Canterbury, and prayed for his successor, Archbishop Rowan, Williams, and whoever may succeed him.

The setting for Evensong was the Evening Service in E minor by Thomas Tomkins.

It seems “joined-up writing” is always a feature of these retreats in Lichfield. On Sunday last, I had been talking in the module on Church History on the contribution of Thomas Tomkins (1572-1656) – alongside John Taverner, Thomas Tallis, John Marbeck, William Byrd and Orlando Gibbons, and later that morning we had heard a Tallis anthem and a Byrd Mass at the Cathedral Eucharist in Christ Church Cathedral, Dublin, later that morning.

After Evensong in the cathedral we walked up Beacon Street and Stafford Road to the Hedgehog, on the northern edges of Lichfield. Our room is named after Thomas Heywood, a late 15th century pre-Reformation Dean of Lichfield Cathedral.

It may be a late night tonight as we sit up to watch the election results coming in from the US. I hope to be back in the cathedral tomorrow for the mid-day Eucharist and Evensong.