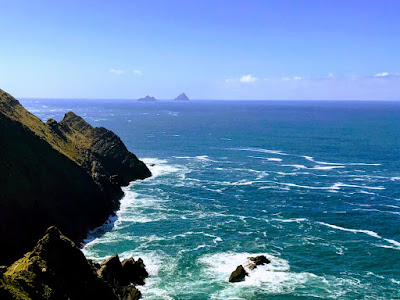 Skellig Rocks … where did the monks go? And how did the Butler family come to own the islands? (Photograph: Patrick Comerford, 2018)

The previous evening, we had dinner in the Fisherman’s Bar at the Butler Arms Hotel in Waterville, where the stained-glass windows in the pub front are engraved with fading versions of the Butler coaty-of-arms. So, I naturally began to wonder was there a thread in this visit to Ballinskelligs that brought together the Skelligs Rocks, the Butlers of Ormond and the hotel and restaurant in Waterville.

A number of factors in the 13th century forced the monks to abandon their monastery on Skellig Michael: there was a general deterioration in the climate in this part of Europe, bringing with it colder weather and increased storms; the structures of the Irish Church had changed, shifting from an emphasis on the monasteries to the diocesan structures; and, with the reorganisation of the church came the reorganisation of monastic life, so that while a rocky eerie suited the eremitical community on Skellig Michael, the Rule of Saint Augustine suited a more stable existence on the mainland and in the new Priory at Ballinskelligs.

The Prior of the Augustinian Abbey at Ballinskelligs was referred to as the Prior de Rupe Michaelis in the early 14th century, implying that the island still formed an important part of the monastery at that time. Indeed, Skellig Michael appears on a number of Italian and Iberian portolan charts from the 14th to the 16th centuries.

But the dissolution of the monastic houses at the Reformation brought an end to monastic life at Ballinskelligs, and the monks lost their grip on the Skelligs Rocks. In 1578, the Skellig Islands passed to the Butler family.

The accounts of the Spanish Armada show that the island was known to them in 1588, and the monastery on the rocks continued to be a place of pilgrimage into the 18th century.

The island was bought by the predecessors of the Commissioners of Irish Lights in 1821 for £780 from the Butler family of Waterville. Two lighthouses along with living quarters for the lighthouse-keepers and their families were built on the island and the lighthouses were first commissioned in 1826.

Meanwhile, the Office of Public Works took the monastic remains into State guardianship in 1880 and began a project for the repair of collapsed structures. The current lighthouse was fully automated in 1987. The lighthouses and surrounding buildings continue to be owned by the Commissioners of Irish Lights which maintains and operates lighthouses around Ireland.

The Office of Public Works continued to repair and conserve the monastic remains. In 1989, the State bought the island from the Commissioners of Irish Lights, with the exception of the working lighthouse and ancillary areas. In 1996, Skellig Michael was added to the UNESCO World Heritage List. 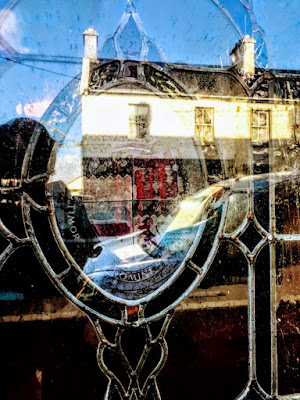 The fading coat-of-arms of the Butler family in a window at the Fisherman’s Arms in the Butler Arms Hotel, Waterville (Photograph: Patrick Comerford, 2018)

But who were the Butler family of Waterville who gave their name to the Butler Arms Hotel and a public fountain?

Waterville is known in Irish as An Coireán, meaning ‘The Little Whirlpool’ or ‘The Sickle.’ ‘The Sickle’ refers to the shape of Ballinskelligs Bay on which the town sits, and the name has been transplanted onto the lake, whose Irish name is Loch Luíoch or Loch Luidheach.

The landowning families in Waterville and the surrounding area included the Marquess of Landsdowne, the Hartopps and the Butlers.

The Butler family built a house at the mouth of the River Currane at the end of the 18th century, and named their house and estate Waterville. The house sits on a narrow isthmus facing the Atlantic with Lough Currane on its east side. The Currane River divides the 50-acre estate in two as it flows into Ballinskelligs Bay. The village that developed on the estate in the early 19th century was also named Waterville.

But this Butler family was not a branch of the Ormond Butlers of Kilkenny Castle. The Butlers of Waterville were descended from Whitwell Butler, a younger brother of James Butler of Priestown, Co Meath, and a descendant the Butlers of Dunboyne.

The Priestown Butler family included many members of the Church of Ireland clergy: the Revd Dr Richard Butler, was Vicar of Burnchurch, Co Kilkenny; and three of his sons were priests, including the Very Revd Richard Butler (1794-1863), Dean of Clonmacnoise and Vicar of Trim, who married into the Edgeworth family. Whitwell Butler’s elder brother, James, was the grandfather of John Butler of Maiden Hall, Co Kilkenny, and he in turn was the grandfather of the Irish writer Hubert Butler of Maiden Hall.

Whitwell Butler received his unusual first name from his maternal grandfather, Sir Nathaniel Whitwell, an alderman of Dublin in the early 18th century. He probably moved to the Waterville are when he married into the Yielding family, and his other properties in the area included Belville. 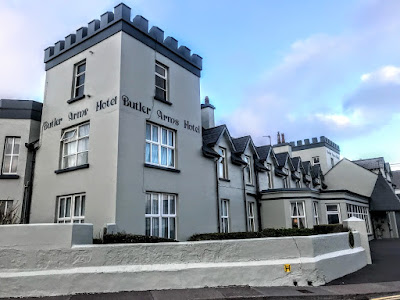 In the 1830s, Whitwell Butler of Belville was the agent for the Blennerhassett lands in Caher Parish. His son, James Butler married into the Day family, a well-known clerical family in Co Kerry, and Agnes Day was also descended from the Fitzgerald family, Knights of Kerry, who owned most of Valentia Island.

Agnes and James Butler were the parents of James Butler (1820-1887) of Waterville, who owned over 1,400 acres in Co Kerry in the 1870s. This James Butler also owned Ballyglassin House, which he inherited from his father-in-law, Roger Green Davis, and was among the principal lessors in the parish of Ballinadee, barony of East Carbery, Co Cork. At the same time, Arabella Butler owned over 700 acres.

Meanwhile, the Butler Arms Hotel opened in Waterville in March 1884. In the same year, the Commercial Cable Company established a transatlantic cable station in the village while the Direct United States line had already one at Ballinskelligs and the first cable had been laid into Valentia Island a quarter of a century before. 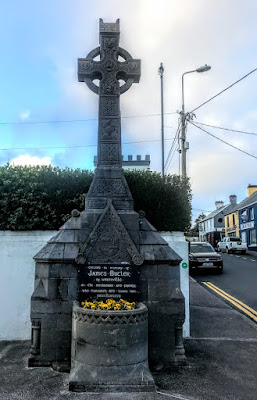 The fountain remembering James Butler of Waterville, who died in 1887 (Photograph: Patrick Comerford, 2018)

When James Butler died three years later in 1887, a freestanding memorial was erected to him at the street corner in front of the Butler Arms Hotel. The memorial is made of cut limestone with a Celtic Cross, a fountain, an inscribed plaque and the coat-of-arms of the Butler family of Waterville, including the motto: Timor Domini fons vitae, ‘The Fear of the Lord is the fount of life.’

The memorial was designed by the Kerry-born architect, James Fraklin Fuller (1835-1924), whose works include Farmleigh House in the Phoenix Park, Dublin, the Superintendent’s Lodge in Saint Stephen’s Green, Dublin, alterations to Saint Mary’s Church, Julianstown, Co Meath, the terracotta-decorated D’Olier Chambers on the corner of D’Olier Street and Hawkins Street, Dublin, and the Church of Ireland parish churches at Saint Brendan’s, Kilnaughtin (Tarbert), and Saint Augustine’s, Ballybunion, both in my parish.

The cut-stone plaque inscription on the Butler fountain reads: ‘Erected in memory of James Butler of Waterville by the neighbours and friends who honoured and loved him MDCCCLXXXVII.’


The Butler Arms Hotel was bought by Martin and Mary Huggard in 1916 and has continued in the Huggard family to the present day. The hotel guest list includes names such as Charlie Chaplin, Walt Disney, Michael Douglas, Catherine Zeta-Jones and Michael Flatley. 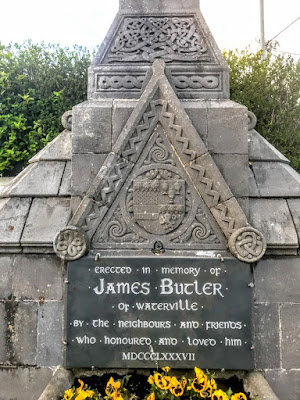 The coat-of arms and inscription on the Butler fountain in Waterville (Photograph: Patrick Comerford, 2018) 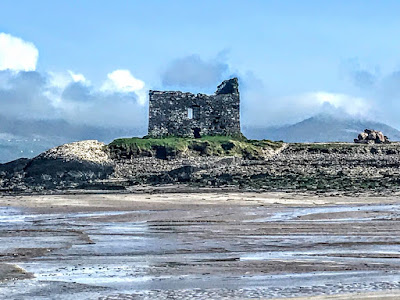 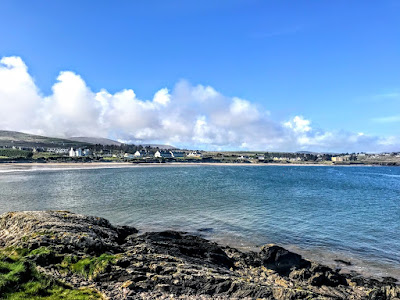 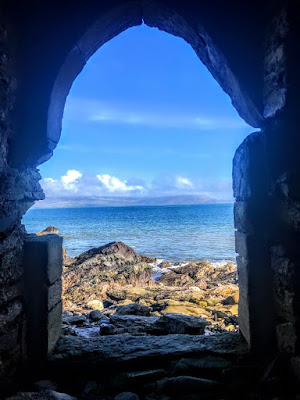 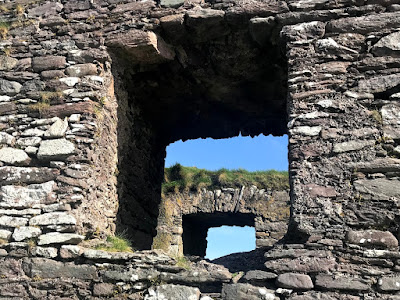