Hymns for Advent (11): ‘Advent’ by Christina
Rossetti and Douglas Brooks-Davies 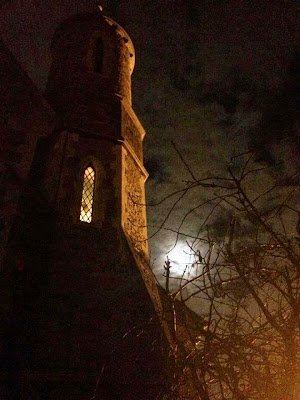 ‘This Advent moon shines cold and clear’ … Zion Church, Rathgar, Dublin, bathed in the moonlight during last week's Advent Carol Service with the students and staff of the Church of Ireland Theological Institute (Photograph: Patrick Comerford, 2014)

As part of my spiritual reflections for Advent this year, I am looking at an appropriate hymn for Advent each morning. This morning [10 December 2014] I have chosen ‘Advent’ by Christina Rossetti.

Her best-known poem and one of the most popular Christmas hymns is her ‘In the Bleak Midwinter.’ This poem was written in 1872, but was never published in her lifetime. It became popular after Gustav Holst set it to music in 1906.

Christina Georgina Rossetti (1830-1894) was born in London on 5 December 1830, the youngest child of Gabriele Rossetti, an Italian poet and political exile, and the half-English, half-Italian Frances Polidori. Her brother Gabriel Charles Dante (best known as Dante Gabriel Rossetti), would become a poet too and one of the great painters in the Pre-Raphaelite Brotherhood. Christina was a model in several of his paintings, including his painting of the Annunciation, Ecce Ancilla Domini (1850).

She began writing poetry at the age of 12, and at 14 she became deeply committed to the life of the Church of England. In 1854, she volunteered to join Florence Nightingale as a nurse during the Crimean War, but was not accepted. In 1859, at 29, she began 10 years of work as a volunteer at the Saint Mary Magdalene Home in Highgate, a shelter for unmarried mothers and former prostitutes. She spent her last 15 years as a recluse in her home, and died of cancer on 29 December 1894.

Her brother William published The Poetical Works of Christina Georgina Rossetti in 1904, and her complete works were published in three volumes in 1979.

Christina Rossetti’s poem ‘Advent’ focusses on holding fast to the hope and promise that the bridegroom will come even though there are no evident signs of his appearing.

She takes her readers on the Advent journey from arduous nights of watching and waiting ito the joyful dawn of Christ’s arrival. The character of Christ’s arrival at the end of the poem is a second coming of sorts. But this is not an end-of-the-world coming; rather, it is the home-coming of the weary pilgrim who enters eternal life after death.

The poet incorporates the three comings of Christ in Advent described by Saint Thomas Aquinas:

● the coming of Christ in his Incarnation;

● the coming of Christ in the human heart;

● the coming of Christ at the end of time.

This poem was originally written to be sung as a hymn, so I am surprised that it is still awaiting a popular hymn setting. But I found it as an anthem on You Tube in a recording at the Church of the Redeemer Choir in Morristown, New Jersey (Diocese of Newark), at Evensong on 12 April 2011, with Edward Alstrom conductor and director. The setting is by the English amateur composer Dr Douglas Brooks-Davies.

He sang counter-tenor at Oxford and in local churches and for many years played oboe and recorders. He now plays transverse flute and spends much time arranging for flute and flute choir.

His score is available at www.cpdl.org.

The Church of the Redeemer is committed to radical hospitality, welcoming all people just as they are. The Church has been recognised for its model of what it means to be a community of faith.

In 1996, the parish was named the Church of the Year in the Diocese of Newark, and in 2001 it was listed in Paul Wilkes’s book, Excellent Protestant Congregations, as one of the 300 outstanding Protestant parishes in the US.

In 2002, Dr Sheryl A. Kujawa-Holbrook of the Episcopal Divinity School in Cambridge, Massachusetts, featured the Church of the Redeemer’s model of diversity as one of six faith communities in her book, A House of Prayer for All Peoples.

Over 160 years after its founding, the Church of the Redeemer is strong and healthy, with a clear understanding of its mission and its vision. The parish consists of 400 members. People come from great distances because the liturgy, worship and outreach at the Church of the Redeemer clearly reflect its mission and vision, just as they did in 1852.

This Advent moon shines cold and clear,
These Advent nights are long;
Our lamps have burned year after year,
And still their flame is strong.
“Watchman, what of the night?” we cry
Heart-sick with hope deferred:
“No speaking signs are in the sky,”
Is still the watchman’s word.

The Porter watches at the gate,
The servants watch within;
The watch is long betimes and late,
The prize is slow to win.
“Watchman, what of the night?” but still
His answer sounds the same:
“No daybreak tops the utmost hill,
Nor pale our lamps of flame.”

One to another hear them speak,
The patient virgins wise:
“Surely He is not far to seek,” –
“All night we watch and rise.”
“The days are evil looking back,
The coming days are dim;
Yet count we not His promise slack,
But watch and wait for Him.”

One with another, soul with soul,
They kindle fire from fire:
“Friends watch us who have touched the goal.”
“They urge us, come up higher.”
“With them shall rest our waysore feet,
With them is built our home,
With Christ.” “They sweet, but He most sweet,
Sweeter than honeycomb.”

There no more parting, no more pain,
The distant ones brought near,
The lost so long are found again,
Long lost but longer dear:
Eye hath not seen, ear hath not heard,
Nor heart conceived that rest,
With them our good things long deferred,
With Jesus Christ our Best.

We weep because the night is long,
We laugh, for day shall rise,
We sing a slow contented song
And knock at Paradise.
Weeping we hold Him fast Who wept
For us, – we hold Him fast;
And will not let Him go except
He bless us first or last.

Weeping we hold Him fast to-night;
We will not let Him go
Till daybreak smite our wearied sight,
And summer smite the snow:
Then figs shall bud, and dove with dove
Shall coo the livelong day;
Then He shall say, “Arise, My love,
My fair one, come away.”