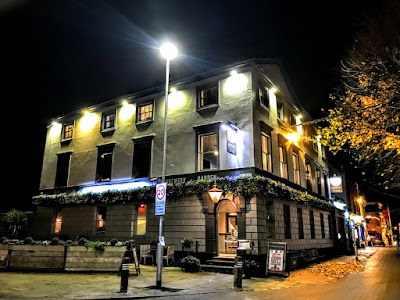 The Brewhouse and Kitchen on the corner of Bird Street and The Friary in winter lights … once a landmark bank in Lichfield (Photograph: Patrick Comerford, 2017)

When I began contributing freelance features to the Lichfield Mercury and the Tamworth Herald around 1971, I was advised that I needed to open a new bank account.

For some reason that I can no longer remember, the choice was between the Lichfield and Tamworth branches of the National Westminster Bank. When I went into the Lichfield branch, for another reason I can no longer remember either, I was referred inexplicably not to another NatWest branch in Lichfield, at the corner of the Market Square and Dam Street, but to the Tamworth bank.

I have never found banks helpful or banking a pleasant task, but it was hardly a moral dilemma.

Nevertheless, each time I find myself at the former NatWest branch on the corner of Bird Street and the Friary in Lichfield I still remember what was perhaps my own banking version of Hobson’s Choice.

This imposing building was the Lichfield branch of the National Provincial Bank, a retail bank that operated throughout England and Wales from 1833 until its merger with the National Westminster Bank in 1970.

The bank expanded rapidly, mainly through the acquisition of smaller, provincial banks, and multiplied branches faster than any competitor. In 1838, it acquired the clients of the Rugeley, Tamworth and Lichfield Joint Stock Bank which closed its Lichfield branch that year.

By 1843, the Lichfield branch was already in Bird Street, at what later became the corner with The Friary, with William White as manager.

The late Nikolaus Pevsner signalled this building out for mention in his architectural survey of Staffordshire in 1974. He says it was probably built in the early 19th century. He describes it as a large stuccoes building, with a rusticated ground floor, and the three-bay pediment on the Bird Street side.

The house was built in the Georgian style in an L-plan around 1820. It is notable for its stuccowork, with a parapeted roof and brick end stack. The building is three storeys, with a six-window range, with a single-storey wing to right.

The building has a rusticated ground floor, a first-floor sill band and top cornice and parapet, with a pediment to the left. The entrance to the wing has rusticated piers and entablature, inset ashlar antae and an iron grille with gate.

The four-window left return to the Friary has a round-headed entrance to the right end with fluted imposts, a bracketed cornice and a rusticated arch over the timber tympanum to the six-panel door.

The rear has a pedimented gabled wing with a two-storey canted bay window over a 20th century single-storey flat-roofed addition.

The National Provincial Bank came to be one of the ‘Big Five’ as it expanded in the 19th and 20th centuries and took over a number of other smaller banks. It was based at Bishopsgate in London, at the junction with Threadneedle Street.

In July 1995, Cotswold Archaeology carried out an Archaeological Evaluation of the land at 1 Bird Street, Lichfield. A trial trench and two test pits were excavated. During the evaluation, mediaeval deposits and a grave dated to the 13th to 14th centuries were identified.

This former long-standing bank is located next to the site of the Franciscan friary and the gatehouse into the Friary. The Friars had their own fresh water supply, which they made available to the people of Lichfield through the conduit at the gate of the Friary in Bird Street. From the 16th century, Lichfield’s water supply was managed by the Conduit Lands Trust.

The conversion of the former bank into a pub was too late for John Shaw’s guidebook, The Old Pubs of Lichfield, published in 2001 and the subsequent edition in 2007. Around this time, I think, it became the Gatehouse, a pub that was part of the JD Wetherspoon chain.

The name was derived from the gatehouse of the former Friary, and it was listed as the Gatehouse by Neil Coley last year in his Lichfield Pubs (2016).

However, in May 2016, Wetherspoons announced a decision to dispose of 33 pubs in England, including the Gatehouse, about the time Neil Coley’s book was published.

The premises changed hands, and following a thorough renovation, the former bank premises at No 1 Bird Street reopened last March [2017] as the Brewhouse and Kitchen.

The pub is part of a bigger chain, but brews its own, unique craft beers on-site in its own microbrewery. The menu seeks to match every dish to a style of beer, and the pub cheerfully announces: ‘We’re pleased to welcome well behaved children, dogs and adults at Brewhouse & Kitchen.’

Meanwhile, NatWest, as it was then known, became part of the Royal Bank of Scotland Group in 2000. The National Provincial Bank continued to exist as a dormant, non-trading company until it was voluntarily struck off the register and dissolved last year [2016].

Although I have been in these premises when this was a bank, I have never been in here since it became a pub. But now I am tempted. No great joke ever opened with the line: ‘Three men walked into a bank …’ And whether you see the glass as half full or half empty, standing at the bar is always a more pleasant experience than standing in a queue at an ATM.

John Michael Lloyd Booker, The Architecture of Banking, a study of the design of British banks from the 18th century to modern times, unpublished DPhil dissertation, University of York, 2 vols, 1984.

Praying in Advent with USPG
and Lichfield Cathedral
(16): 18 December 2017 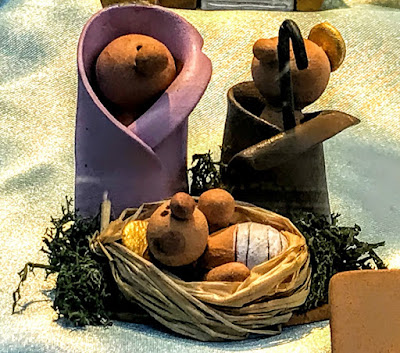 ‘In remembering the Nativity, pray for good health for mothers and babies … around the world’ … a Nativity scene in a shop window in Bologna (Photograph: Patrick Comerford, 2017)

There is just a week to go to Christmas Day. Yesterday was the Third Sunday of Advent, and we are now in the last week of Advent.

Today [18 December 2017] is also the feast of Saint Flannan, the patron saint of the Diocese of Killlaloe. He gives his name to Saint Flannan’s Cathedral, Killaloe, one of the three cathedrals where I am also the Precentor.

The Prayer Diary yesterday included an article by Sister Gillian Rose, a former USPG mission partner, who oversees the USPG-supported Bollobphur Hospital, which is owned by the Church of Bangladesh. 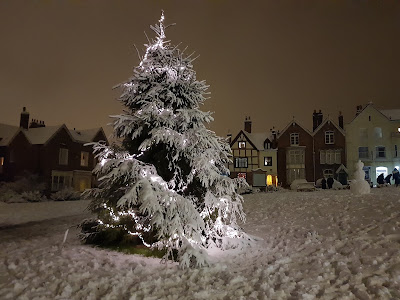 ‘Take five minutes to sit and be calm and smile’ … calm in the snow in the Cathedral Close, Lichfield, last week (Photograph: Steve Johnson, 2017)

In this Advent season, in remembering the Nativity, pray for good health for mothers and babies in Bangladesh and around the world.

Today, the calendar is headed ‘O Adonai,’ referring to the second of the O Antiphons in the final week of Advent.

Think of all you’ve got to do before Christmas. Take five minutes to sit and be calm and smile about the people and things bringing you real joy.