A visit to the ancient monastery,
castle and church in Taghmon 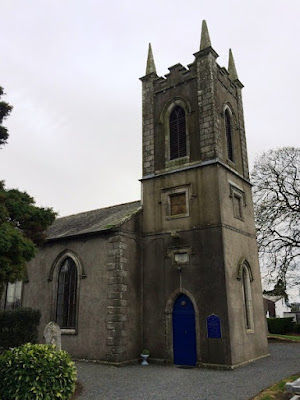 Saint Munna’s Church, Taghmon, stands on the the site of the monastery founded in the seventh century by Saint Fintan Munnu (Photograph: Patrick Comerford, 2015)

At the end of my overnight stay in Bunclody, Co Wexford, last weekend, I visited Saint Anne’s churchyard in Killanne’s to see the grave of John Kelly, “the Boy from Killanne,” and to visit Saint Munna’s Church in Taghmon, as part of my research on the life of the Revd Henry Francis Lyte, the hymn-writer and author of Abide with me, who was a curate in the south Co Wexford parish 200 years ago.

Taghmon is about 14 km west of Wexford, just south of the main road linking Wexford and New Ross, and according to the 2011 census has a population of 1,060.

Saint Munna’s Church, Taghmon, stands on the the site of an early monastic settlement founded in the seventh century by Saint Fintan Munnu, who gives his name to Taghmon.

Saint Fintan Munna, also known as Saint Munna of Taghmon or Saint Fintan, was born in the mid-sixth century. He was named Fionn, and this was prefixed with the word Mo, meaning “My Fionn.” Over time, this changed to Munna. He studied at Devenish in Co Fermanagh and at Kilmore, Co Cavan.

He travelled to Iona in Scotland in the year 597 to visit Saint Columba or Colmcille. Munna founded several churches there before returning to Ireland where he visited East Clare. He finally came to Leinster and is associated with the fortified church at Taghmon, Co Westmeath. He later established a church, known as Teach Munna or the “House of Munna,” in Co Wexford. This was also shortened to Taghmon.

Saint Munna has been generally regarded as a harsh and strict taskmaster and this is reflected in some of the stories about his life. For example, it is said that after a sojourn in Scotland he did not visit his own people, and he threatened to leave Ireland if his relations came near him again.

It is also recalled that Saint Munna was “less than pleasant” to the virgins who asked for his blessing, that he put a curse on Ard Crema when the monks asked him to leave the place, and that an angel warned him that he treated his monks too harshly.

Saint Munna’s obduracy is shown in the debate about dating Easter. In 525, Rome adopted a new system based on a more accurate lunar cycle of 19 years, compared to an older system said to have been brought to Ireland by Saint Patrick. At a convention in Old Leighlin in 630 called to discuss the matter, Munna vigorously led the opposition to the new system. Although he lost the debate, the old dating system persisted in parts of Ireland for many years.

Yet, in the Martyrology of Donegal, Saint Munna is credited with the patience of Job for the way in which he endured his leprosy.

According to the Annals of the Four Masters, Saint Munna died on 21 October 634 and his feast was celebrated on that date. The Annals of Ulster also give 634 as the year of his death. It seems certain that he was buried in his monastery in Taghmon.

Saint Munna’s monastery in Taghmon once had around 230 monks. Although it was plundered by the Vikings in 917, the monastery lasted until l061, when it is recorded in the Annals of Inishfallen that Domhnall Deisech died there.

The monastery at Taghmon was later granted by Dermod Mac Murrough, last King of Leinster, to the Abbey at Ferns, becoming an Augustinian house. 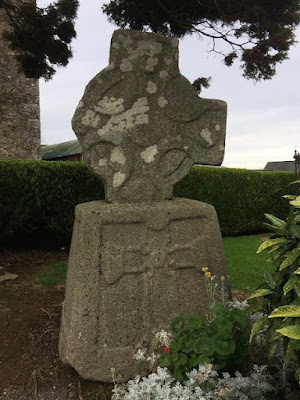 Two portions of a once-magnificent granite cross are all that remain of Saint Munna’s monastery (Photograph: Patrick Comerford, 2015)

All that remains of Saint Munna’s early monastic settlement are two portions of a once-magnificent granite cross inside the entrance gates, close to the north-west corner of the church.

The High Cross of Taghmon has an elegant simplicity. It is said to date from the ninth century and to have been vandalised by Vikings.

The shaft of the cross is missing, the head is turned on its side and one of the arms is set in the granite base. The head is decorated on each side with moulding and bears five plain bosses on each face – one in the centre and one on each terminal. The huge truncated pyramidal shaped cross base stands 1.18 metres high and bears a ring-less cross in false relief on one of its faces.

The graveyard around Saint Munna’s Church is ancient and has many old vaults and tombstones. 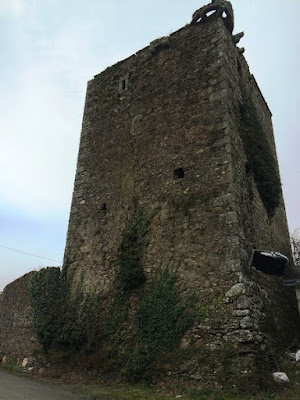 Taghmon Castle belonged to the Talbot family and later to the Hore family (Photograph: Patrick Comerford, 2015)

After the arrival of the Anglo-Normans in Co Wexford in the 12th and 13th centuries, Taghmon Castle was built as a towerhouse or keep beside the church.

There are references to the Manor at Taghmon from the early 15th century, when it was held by the Talbot family and the descendants of Sir Gilbert Talbot, Lord of Wexford.

In 1549, William Hore was the custodian of Taghmon Castle, and the castle seems to have passed to his descendants, who still owned the castle in the 19th cntury. Today is sadly neglected and in state of advanced dereliction.

The castle has a partly blocked round-headed doorway in the east wall, corbels of a machicolation at roof level and bartizans at the south-east and north-west corners. Above the doorway is a large “murder hole” or possibly the space to accommodate a portcullis. 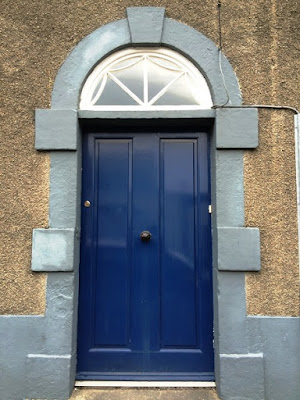 The Georgian doorway of a once-elegant townhouse in Taghmon dating from 1736 (Photograph: Patrick Comerford, 2015)

From the 18th century, Taghmon was united to the parishes of Ballyconnick and Ballymitty. The prosperity of Taghmon rested on trade and traffic passing along the main road between New Ross and Wexford, and when the road was realigned and Taghmon was bypassed, it became dependent on fair days and went into an economic decline in the 19th century that was never reversed.

A hint of that earlier prosperity can be glimpsed in the few surviving and once-elegant Georgian doorways, houses and shopfronts. 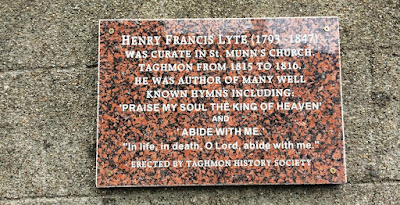 A plaque on the walls of the churchyard records that Henry Francis Lyte was the curate of Taghmon 200 years ago (Photograph: Patrick Comerford, 2015)

In his Topographical Dictionary, Samuel Lewis notes that the parish of Taghmon was attached to the prebendal stall of Taghmon in Saint Edan’s Cathedral, Ferns.
After the 1798 Rising, the Revd Simon Little was Rector of Taghmon (1813-1823), and his most famous curate was the Revd Henry Francis Lyte (1793-1845), the hymnwriter and author of Abide with me, who was the curate of Taghmon 200 years ago from 1815 to 1817.

The present Saint Munna’s Church was built in 1819 on the site of an early monastic site and previous churches, and an earlier, square, embattled tower from an earlier church was incorporated in the present church building.

On 16 January 1817, a year after the restoration and rebuilding of Saint Edan’s Cathedral in Ferns, the Rector of Taghmon, the Revd Simon Little, and the Select Vestry of the parish discussed the “ruinous state” of the church. They agreed to apply to the Board of First Fruits for a loan of £800 to rebuild the church, and two months later, on 24 March 1817, they decided to borrow £1,000 to rebuild the church or build a new one.

The committee appointed to oversee the project included the Revd Simon Little, Rector of Taghmon, the curate, the Revd George Jones, Walter Hore of Harperstown, Colonel William Pemberton Pigott of Slevoy Castle, and Thomas Phillips. By 1818, the old church had been pulled and, although there are no to the architect or the builder, the church was rebuilt by 1819 and the date MDCCCXIX was placed over the main door.

The church was simple in plan with a nave and a vestry. The tower of the original church was restored but the nave now faced in a different direction. The church was Gothic in style with splendid windows providing plenty of light, and the walls were of local stone or stone salvaged from the older church. The interior decoration was minimal and the main features were the altar and the pulpit.

By the time Samuel Lewis was writing in the 1830s, the glebe in Taghmon was small and was made up of only about three roods or about 3,000 square metres of land in the village.