The Seven Churches that make up
Bologna’s own Little Jerusalem 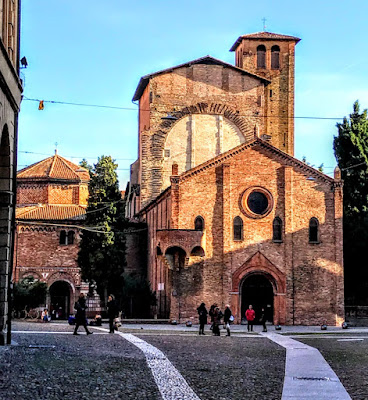 The ‘Sette Chiese’ or Seven Churches is an ecclesiastical complex that is known as Bologna’s Holy Jerusalem (Photograph: Patrick Comerford, 2017)

There is a little Zion in a quiet piazza in the heart of Bologna. For more than 1,000 years, the Basilica of San Stefano (Basilica di Santo Stefano) has been known as the Sancta Jerusalem Boloniensis, or Bologna’s Holy Jerusalem.

San Stefano is not just one church or basilica, but a complex of church buildings known locally as Sette Chiese (‘Seven Churches’) and also as Santa Gerusalemme (‘Holy Jerusalem’).

Santo Stefano faces onto Piazza Santo Stefano, a long isosceles triangle rather than a square, and one of the most beautiful of Bologna’s many piazze. San Stefano and its precincts stand at the far end of this piazza, at the shortest edge of the triangle.

The architectural ensemble of San Stefano is sometimes called le Sette Chiese or the Seven Churches. The number seven has a mystical significance, but in fact there are now four churches, fused together in this complex maze or ecclesiastical labyrinth. 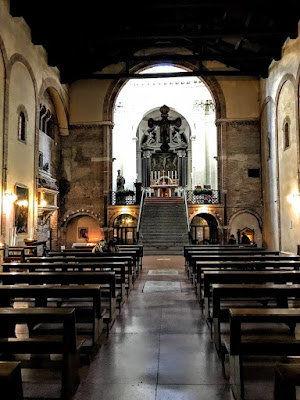 The Church of the Crucifix with its elevated altar, crucifixes and crypt (Photograph: Patrick Comerford, 2017)

The entrance to Santo Stefano is through the largest and most prominent building, the Church of the Crucifix, an austere space dedicated to the Passion of Christ.

This is the Church of Saint Stephen or of the Holy Crucifix, built in the eighth century and reshaped in the 17th century, with a crypt.

The altar stands on a mezzanine at the top of a double flight of stairs. Suspended above is a Byzantine-style crucifix, with a grey and skeletal Christ close to death. He is watched by his mother, the Virgin Mary, and Saint John the Evangelist. This is the work of the artist who became known as Simone de’ Crocifissi, or Simon of the Crucifixions.

A similar crucifix, but Baroque in style, hangs at a distance behind the first crucifix, in the apse of the church. These two works are separated by about 10 metres and 200 years. The Abbot Martino was buried in the crypt below in 1019. 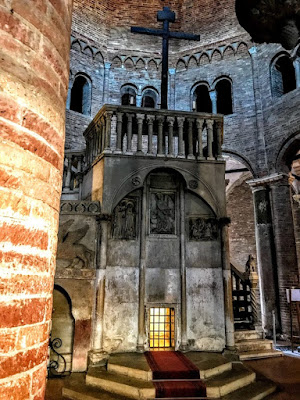 A low door on the left leads into the second church in the complex, the Holy Sepulchre. This tall, cylindrical building stands on the site of a Roman temple of Isis, the first sacred building on the site. According to tradition, Saint Petronio built the basilica over the temple of the goddess Isis, replacing it with a building that recalled the Church of the Holy Sepulchre in Jerusalem, although the building seen today is more likely to have been modelled on the later Crusader Church than the earlier Constantinian church.

One of the Roman columns still stands, a slim marble rod jammed up against a stouter brick-built neighbour.

In the middle stands a 1,000-year-old mausoleum – a building within a building. It was planned as a replica of the tomb of Christ in the Church of the Holy Sepulchre in Jerusalem, but has been altered and amended down the centuries. This was the burial-place of Saint Petronio, the fifth century Bishop of Bologna and patron of the city. At the bottom of the structure, like a grate in a fireplace, is a barred window, through which the grave of Saint Petronio could be seen. His body was moved in 2000 to the Basilica of Saint Petronio in Bologna’s Piazza Maggiore, where his head was already enshrined. 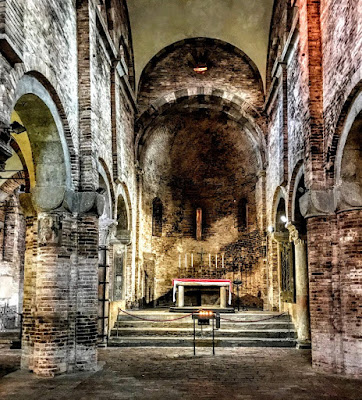 The Basilica of Saint Vitale and Saint Agricola was built in the fourth century and rebuilt in the 12th century (Photograph: Patrick Comerford, 2017)

The Sepulchre leads to the next building, the Basilica of Saint Vitale and Saint Agricola, built in the fourth century, and rebuilt in the 12th century.

These two Romans, master and servant, were the first citizens of Bologna to become Christian martyrs when they were killed in the year 305 during the persecutions of the Emperor Diocletian. Their bodies were unearthed in 392 and reburied by Saint Ambrose of Milan. The church is bare but has some warm decorative touches, such as the low-relief peacocks and deer on the stone sarcophagus the saints. 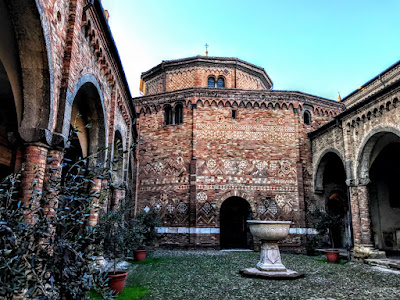 The Courtyard of Pilate and the ‘Catino di Pilato’ (Photograph: Patrick Comerford, 2017)

Outside the Holy Sepulchre, the Courtyard of Pilate (Santo Giardino, the Holy Garden), dates from the 13th century and recalls the Roman paving in Jerusalem where Christ was condemned at his Passion.

In the centre, a marble basin known as the Catino di Pilato is a Lombard work from 737-744, recalling how Pilate washed his hands of any responsibility of what happened to Christ. The marble basin was the gift of the Lombard kings, Liutprando and Ilprando, who regarded Saint Stefano as their main religious centre.

Under the portico at the centre of a window on a column, a 14th-century sculpted rooster, known as the Rooster of Saint Peter, recalls the biblical story of Saint Peter’s denial. 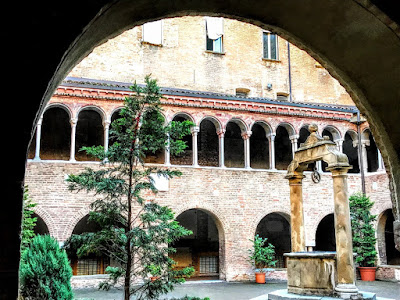 The Benedictine cloisters, dating from 10th-13th century, are particularly appealing for the double open gallery, one of the most splendid works of architecture in the Romanesque style in this region of Italy.

The capitals of some of the columns take the form of unhappy, naked little men, hunched or crouching or, in one case, clinging to the top of the column like a monkey on a palm trunk. These naked homunculi are the work of the Lombards, who are also responsible for the magnificent brickwork patterns, like a patchwork quilt in shades of terracotta, that make up the walls of Pilate’s Courtyard. 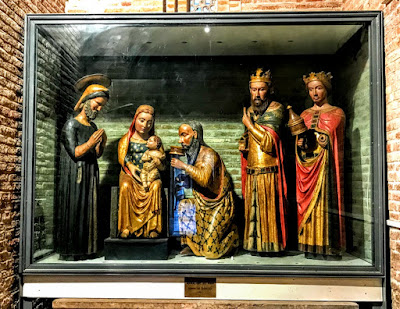 The Visit of the Magi in the Church of the Holy Cross or ‘Martyrium’ (Photograph: Patrick Comerford, 2017)

The fourth church, the Church of the Holy Cross or the Martyrium, is also known as the Church of the Trinity and dates from the 13th century. Its width is greater than its length, and it features a series of niches along the back wall. One niche contains a colourful and joyful group of wooden figures representing the three kings presenting their gifts to the Christ Child. These too are the work of Simone de’ Crocifissi.

A horizontal wooden statue depicts the dead Christ, his feet foremost, his pierced hands crossed over his abdomen, his head lost in shadow.

In addition, this complex includes the Chapel of the Bandage (Cappella della Benda), dedicated to the strip of cloth worn around the head by the Virgin Mary as a sign of mourning, and a museum.

This Jerusalem of Bologna has evolved over the centuries to present a symbolic pilgrimage. 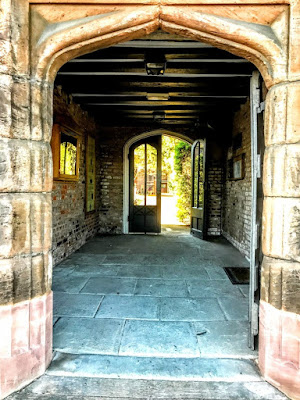 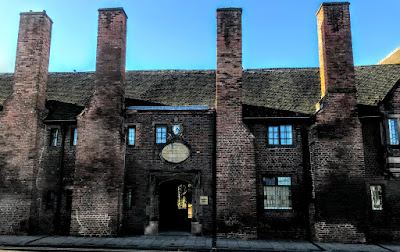 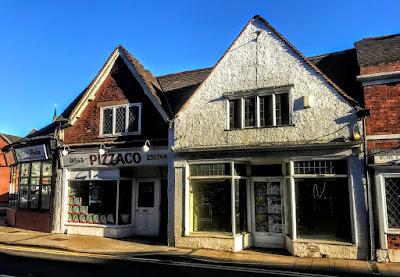 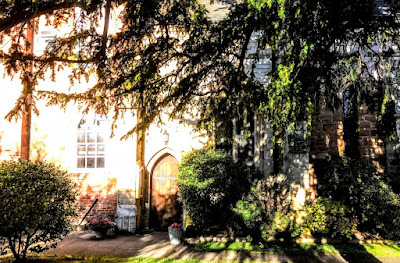