Golden sands, blue skies and seas
and fields of green and gold in Fingal 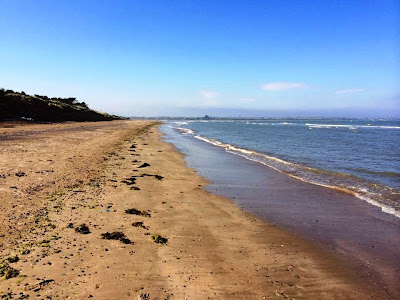 The tropical-like storm that was threatening the east coast of Ireland seems to have been short-lived and this evening [18 February 2014] has ended up as a bright, sunny, summer evening with bright sunshine and clear skies.

The storm even held off late last night, when I was returning from Kilcoole after my lecture on Sir Thomas Myles organised by Kilcoole Heritage Group.

There was an encouraging turnout including children and grandchildren of people who had been involved in the Kilcoole gunrunning 100 years ago, local parishioners and clergy, and enthusiastic local historians. 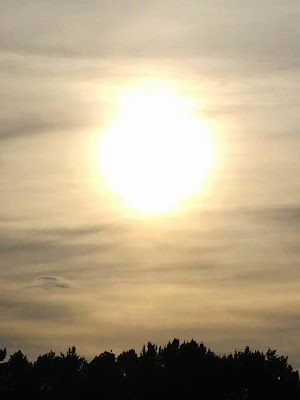 Earlier in the evening it was warm enough to eat out in the open at Bochelli’s Restaurant on Church Road, Greystones.

Later, there was a beautiful sunset behind the trees around Kilcoole Golf Club, but I awoke early this morning to a heavy thunderstorm, with bright lightning and the rain pouring down outside my bedroom like waterfall.

Eventually the storm eased off, and by this afternoon the sun was beginning to break through. 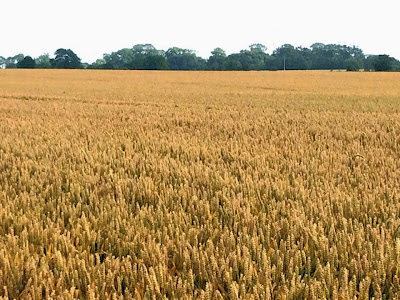 Gold and green in the large field in Donabate this afternoon (Photograph: Patrick Comerford, 2014)

After printing out Sunday’s sermon, two of us headed out to Portrane, stopping on the way in Donabate to admire a large field of almost 50 acres, planted with wheat that is ripening and almost ready for the harvest.

Yes, Sunday’s Gospel reading (Matthew 13: 24-30, 36-43) is about the wheat and the tares growing together. And this was a splendid sight of gold and green.

In Portrane, the large red and white tent is already up as preparations roll on for the August bank holiday weekend sale (2-4 August 2014) in aid of Heart to Hand and the projects it supports in Romania and Albania.

Although some mist shrouded Lambay Island, it was still a warm summer afternoon, with temperatures in the mid-20s and clear blue skies when we went for a long walk on the soft sand on Burrow Beach. The tide was going out, and there beautiful views north towards Rush.

The storms earlier this year posed a real threat to the survival of this beach. Hopefully summer will allow it to recover and nature will be kinder and more gentle next winter.

But, hopefully, there is still more of summer to enjoy without even thinking of winter yet. And after, some train tomorrow, the forecasts this evening promise more sunshine and temperatures in the mid-20s as we move into next week. 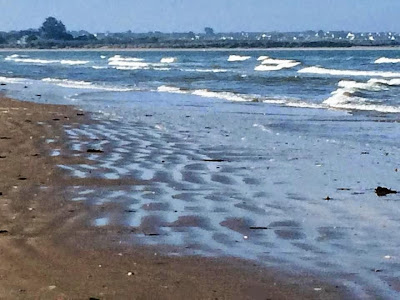 The forecasts promise more sunshine and temperatures back in the mid-20s next week (Photograph: Patrick Comerford, 2014)

Posted by Patrick Comerford at 22:21 No comments: