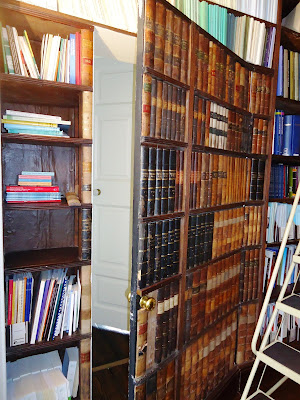 A secret panel in a bookcase leads into another room in the Bishop’s Palace in Kilkenny (Photograph: Patrick Comerford, 2013)

The great and the good gathered in the Old Bishop’s Palace in Kilkenny last night [Friday 29 June 2013], and the former dining room was transformed to bring us back to the 18th century and to give us a taste of the lifestyle of Richard Pococke, the enigmatic if not exotic 18th century Bishop of Ossory and travel writer.

We were there for the launch of Rachel Finnegan’s new book, her third volume of The Grand Tour Correspondence of Richard Pococke and Jeremiah Milles. The book was launched graciously by Professor George Huxley, who taught for 20 years at Queen’s University in Belfast as Professor of Greek, and who is a former Assistant Director of the British School at Athens, where Rachel has also worked. 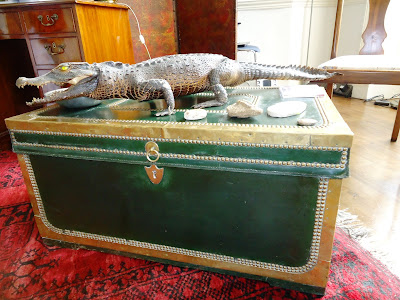 The former Bishop’s Palace, which had been Pococke’s home as Bishop of Ossory, is now the offices of the Heritage Council. There too last night were Pococke’s present-day successor, Bishop Michael Burrows, and a collection of Rachel’s colleagues from the academic and classical world.

There too were the Revd Professor John Bartlett, who worked closely with her in Trinity College Dublin, and who published an account of Pococke’s travels in Lebanon in 1738, and many of her colleagues from Waterford Institute of Technology, including Dr Richard Hayes, Head of the School of Humanities, who introduced the evening programme.

Richard Pococke (1705-1765), later Bishop of Ossory, and his younger cousin Jeremiah Milles (1714–84), later Precentor of Waterford Cathedral (1736), Dean of Exeter (1762) and President of the Society of Antiquaries, set out in 1734 and 1736 on two tours of continental Europe, which they recorded in their travel journals and letters, mainly to Pococke’s mother and to their uncle, Thomas Milles, Bishop of Waterford and Lismore.

Early last year, I reviewed her first volume for the journal of the Association for the Study of Travel in Egypt and the Near East. Now this third volume – the final in the series – reproduces 43 of the 48 letters (with summaries of the remaining five) Pococke wrote to his mother from the time he sailed from Livorno to Alexandria in September 1737, until his arrival three years later at Messina, where he was obliged to undergo a period of quarantine.

These letters provide a complete and continuous account of the bishop’s three-year voyage through the “Sultan’s dominions,” including Egypt, the Holy Land, Syria, Lebanon, Asia Minor, Turkey, the Greek islands and mainland Greece. His daily entries in his journal offer immediate and intimate accounts of the architecture, customs, landscape, climate, natural history and cuisine of the Ottoman Empire in the first half of the 18th century.

The letters are written in a light and amusing style, intended to entertain and placate his anxious mother, and offering us an alternative view to that of Mrs Delany that he was “the dullest man that ever travelled.”

This volume concludes with an appraisal of Pococke’s reputation as a travel writer and theologian, and introduces an obscure satirical poem (Meekness and Ambition, or the Hypocrite Detected) which, published in 1765, the year of his death, attempted to discredit his name as Bishop of Ossory. 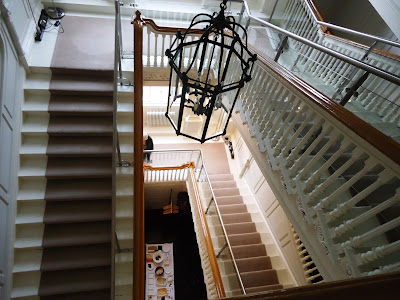 The stairs in the former Bishop’s Palace in Kilkenny (Photograph: Patrick Comerford, 2013)

Dr Rachel Finnegan read Classical Philology at Trinity College Dublin and NUI Maynooth, spent two years at the British School of Archaeology in Athens and now lectures at Waterford Institute of Technology. She taught me classical Greek in Trinity College Dublin in 1987. The course was organised by the Classical Association of Ireland and the Royal Irish Academy, and followed a course prepared by the Joint Association of Classical Teachers and Cambridge University. 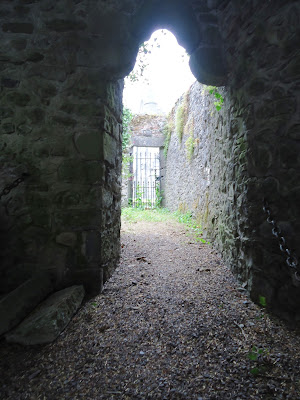 A secret garden? ... looking from a corner of the Deanery garden into the grounds of Saint Canice’s Cathedral, Kilkenny (Photograph: Patrick Comerford, 2013)

Before last night’s book launch, we parked the car at the Deanery, beside Saint Canice’s Cathedral, and after a pleasant stroll through Kilkenny we had an early meal in the Hibernian on Patrick Street.

After the book launch, we were brought on a guided tour of the Old Palace, by Michael Starrett, Chief Executive Officer of the Heritage Council, and had interesting discussions with Colm Murray, the Architecture Officer. 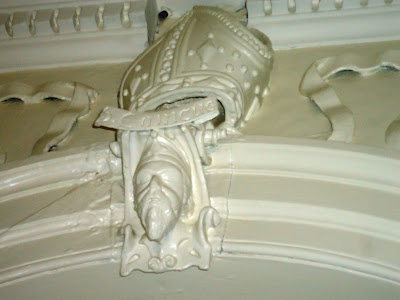 We were shown the secret panel that looks like part of a book case but opens into another room, the former chapel with the head of mitred hear of Saint Canice over the door, and the 14th century tower, the Venetian windows overlooking the gardens across to the new Bishop’s House, and the formal portraits of many past bishops – all looking far more sober and staid than Pococke in his Oriental attire on the covers of Rachel’s three volumes. 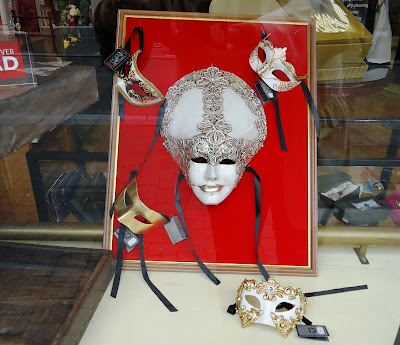 Posted by Patrick Comerford at 10:50 No comments: