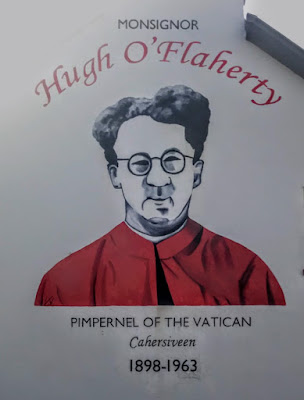 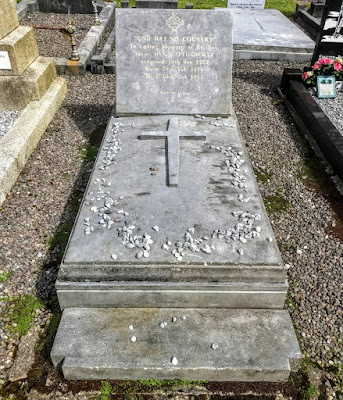 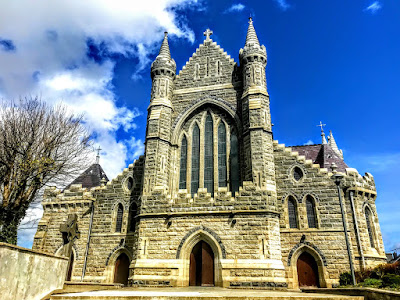 On the way to Ballinskelligs in the Kerry Gaeltacht late last week, I stopped for lunch in Cahersiveen on the western end of the Ring of Kerry and the birthplace of Daniel O’Connell (1775-1847).

‘The Liberator’ was born Carahan, Cahersiveen on the edge of Cahersiveen on 6 August 1775 and died in Genoa on 15 May on 1847. His heart was buried in Rome at Sant'Agata dei Goti, then the chapel of the Irish College, and the remainder of his body was buriedbeneath the Round Tower in Glasnevin Cemetery, Dublin.

O’Connell has given his name to the main streets in Limerick, Dublin, and countless more main streets in cities and towns throughout Ireland. But the principal tribute to him in the town of his birth is the Daniel O’Connel Memorial Church in the centre of Cahersiveen.

The church, also known as the Church of the Holy Cross, was commissioned by Canon Timothy Brosnan (1823-1898), who became Parish Priest of Cahersiveen in 1881. Canon Brosnan also secured £70,000 funding from the House of Commons for the extension of the Southern and Western Railway from Killorglin through Cahersiveen to Valentia Island, worked for the relief of poverty in south Kerry, and invited the Presentation Sisters to open a school in the town. 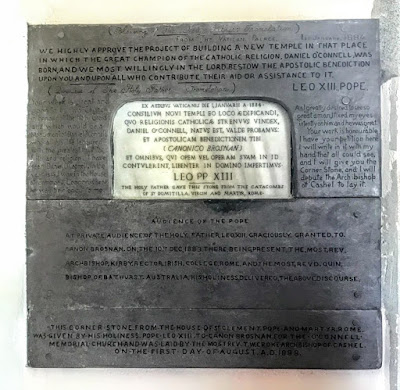 The cornerstone in the church was presented by Pope Leo XIII (Photograph: Patrick Comerford, 2018)

Canon Brosnan secured a private audience with Pope Leo XIII to discuss his plans for the new church, and received papal approval. The cornerstone presented by Pope Leo XIII in 1884 consists of 4 cwt slab of marble from the catacombs of Saint Clement in Rome. Archbishop Croke of Cashel laid the foundation stone inside the tower door of the church on 1 August 1888.

The church was designed by George Coppinger Ashlin (1837-1921), AWN Pugin’s son-in-law. It is built of granite from Co Down in a style that combines the Gothic Revival and mediaeval styles of architecture. 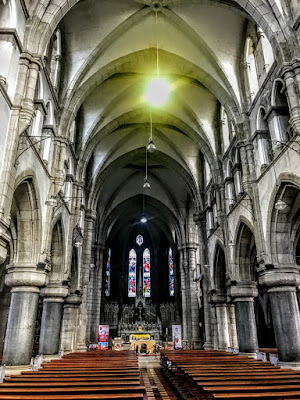 ‘The church is to accommodate about 2,000 people ... There will be a triforium, or passage, over the ceilings of the aisles, opened to the nave by a long arcade, to which access is gained by a staircase at each side of the west porch. These staircases will also lead to the roof gutters of nave. There will also be a staircase in one of the turrets of tower, giving access to the various floors thereof to the base of the spire and to the gutters of chancel and transept roofs; this, since there will be access from the triforium to the aisles roofs, there is no part of the roofs which cannot be examined without ladders of scaffolding.

‘The organ gallery will be in the north transept, and will be reached by the nuns (to whose use it will be chiefly confined) by a staircase leading from the choir. There will be a recess for an altar in this transept.

‘In the tower porch there will be two arched recesses opposite the entrance, in which it is proposed to put bas-reliefs representative of O’Connell’s love for religion, and in the pier between these arches the memorial stone presented by his Holiness Pope Leo XIII, will be set.

‘The materials throughout are selected with a view to the monumental, and therefore, as nearly as possible, imperishable character of the work, and the construction is of the more substantial character. The foundations, which are already built, are of cement concrete, about 11 ft. deep; the facing of the walls will be of Minard red stone, the dressing of Kerry white limestone, and the dark bands, &c., of black limestone from Castleisland. The whole of the ceilings will be vaulted with concrete groined vaulting, the ribs and arches of stone, and the roofs of oak, covered with Valentia slates.

‘It is intended to use Irish marbles in the shafts, floors, &c., to a considerable extent. The style chosen for the building is Gothic of a very early type, – the round turrets and battlements, gables, and parapets giving an Irish character to the composition.’

Ashlin’s designs for the east, west and south elevations were published in The Architect in 1888. However, neither the 90 ft tower nor the 168 ft spire included in the illustrations was never completed. 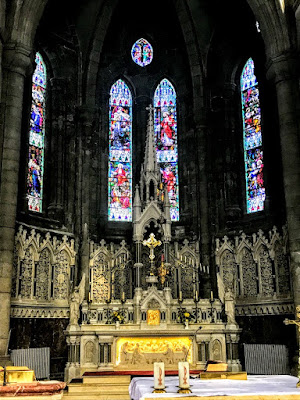 The chancel and apse in the Daniel O’Connel Memorial Church in Cahersiveen (Photograph: Patrick Comerford, 2018)

The rock-hewn granite ashlar walls have smooth-finished dressings. There are smooth granite surrounds at the lancets, and rock-hewn limestone voussoirs at the arches.

The groin-vaulted interior has granite ribs on pilasters or clustered columns. The arcades at the aisles have polished black granite columns with a triforium and a clerestory.

The stained-glass windows in the apse were designed by Franz Meyer and Co of Munich. Although the chancel has been re-ordered, it retains the reredos. The organ loft is in the south transept.

The church was built in 1888-1902, although building work had stopped in 1893 when funds began to dry up. The church finally opened for Mass in 1902. Today, the church is the most visible landmark in the town, and it is one of the few Roman Catholic churches anywhere dedicated to a lay person. 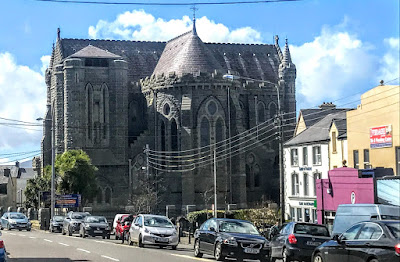