Memories of the Holocaust, and
today’s refugee crisis in Europe 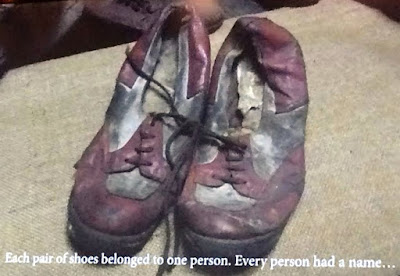 ‘Each pair of shoes belonged to one person. Every person had a name …’ (Photograph: Patrick Comerford, 2016)

My parents waited until World War II was over to get married in September 1945, and I was born 6 ½ years after the end of the war. Long before that, my grandfather, his brothers and his cousins, lived at different times in the ‘Little Jerusalem’ area of Dublin that was centred on Clanbrassil Street.

In the short space of a half century or little more, immediate members of this one branch of the Comerford family had addresses in at least 15 houses in Lower and Upper Clanbrassil Street. Many more lived at different times in the same era in houses in the warren of streets off Clanbrassil Street, in Little Jerusalem, in Portobello and around Charlemont Street. If I add to their names their in-laws, their cousins and their nieces and nephews, it must have been impossible to walk along Clanbrassil Street any time of night or day over 100 years ago without meeting either someone who was Jewish or another member of the Comerford family.

Holocaust Memorial Day is commemorated tomorrow [27 January], the date when the concentration camp at Auschwitz-Birkenau was liberated 71 years ago, on 27 January 1945.

On Sunday evening [24 January 2016], I was a guest at the National Holocaust Memorial Day commemoration in the Mansion House, Dublin.

In his address, the Taoiseach, Enda Kenny, said all who are fleeing war and terror must be treated with compassion and respect according to human rights under international conventions and the law. He challenged us to draw parallels between the failure of European states to offer sanctuary to Jews during the Holocaust and the refugee crisis facing Europe today.

He recalled that in 1938, Ireland and 26 other states gathered at the Évian conference to consider the plight of Jewish refugees fleeing persecution by Nazi Germany, but that Europe “closed its borders to the men, women and children facing them.”

“Today with the refugee crisis from Syria, the men, women and children are from another faith, but Europe shares with them something so profound, both estimable and inestimable: our common humanity. If we keep our focus on that, there can be no ‘them’, only ‘us’,” the Taoiseach said. 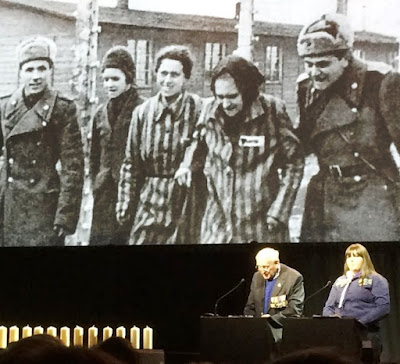 Albert Sutton and Rebecca Murray speak about the liberation of the camps in 1945 (Photograph: Patrick Comerford, 2016)

Three Holocaust survivors now living in Ireland – Suzi Diamond, Jan Kaminski and Tomi Reichental – were present on Sunday night. Mr Kenny said that as the survivors of the Shoah grew fewer in number their testimony became even more important: “I am struck by how for each of them they don’t as much tell their story, as relive it. And we are privileged to be in their presence.”

Tomi Reichental, who was born in Slovakia in 1935, told us of how he was captured by the Nazis when he was a nine-year-old boy. He and his family were herded into a cattle car and “treated like animals” until, seven days later, the doors opened and they were faced with shouting SS men and barking Alsatians.

At Bergen-Belsen, he watched people die of disease and the cold in horrific conditions. “Seventy-thousand prisoners of Bergen-Belsen are buried there in unmarked graves. I lost 35 members of my family in the Holocaust,” he said.

Jan Kaminski, who came to Ireland as a political refugee, had his “entire family wiped out” in the Holocaust. His daughter Jadzia Kaminska told his story. He was born in the small town of Bilgoraj in south-east Poland. I once worked with his son Jas in The Irish Times, and Jan only revealed his original Jewish identity to his family about 25 years ago. Today, a modest project of Jewish revival is taking place in Bilgoraj, but no traces of his direct family have ever been found.

Suzi Diamond, who was born in Hungary in 1942, was a small infant when she was deported first to Ravensbruck and then to Bergen Belsen. Bob Collis brought Suzi and her brother Terry to Ireland in 1945, and they were adopted by a Jewish couple in Dublin, Elsie and Willie Samuels.

After her brother died in 2007, she thought she had no surviving family members. But things changed over the last two years when she visited Hungary, met her first cousins, saw her grandfather’s house in Karcag, visited the Jewish cemetery where her grandparents are buried, and visited the synagogue where all her family prayed – 778 Jews lived in Karcag before World War II; 461 of them were murdered in the Holocaust.

“There is a memorial scroll on the synagogue wall recalling the Jews from Karcag who perished in the Holocaust,” she said. “My family is listed on it, but now the scroll has to be corrected because my brother and I survived.”

Sue Conlan of the Refugee Council drew connections between boats that carried Jewish refugees to the US and Turkey, only to be refused permission to land, and those that bring refugees from Syria and elsewhere to Europe’s southern shores today. “Not a lot has changed in the past 75 years,” she said.

Charlie Flanagan said: “The National Holocaust Memorial Commemoration provides a valuable opportunity for us to remember the lives of the over 11 million men, women and children who suffered in the most harrowing way imaginable during a time which is in living memory for some.” 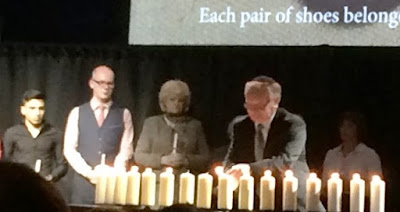 Lighting candles in memory of the victims of the Holocaust (Photograph: Patrick Comerford, 2016)

He said the Holocaust was the “most extreme manifestation of intolerance and hatred of difference”, and warned that it must never be forgotten. “It must, indeed, be in our minds, when confronting intolerance, persecution and hatred in the world of today.” he said.

Candles were lit in memory of the six million Jews who were murdered in the Holocaust, and candles were also lit to remember the other victims of the Nazis and their collaborators, including 300,000 people with disabilities, more than 3 million Poles and Slavs, thousands of black people, members of other ethnic minorities, 250,000-300,000 Roma or Sinit people (Gypsies), an unknown number of homosexuals, the political victims and Christian victims.

The figures are impossible to grasp. Of the 6 million Jews murdered in the Holocaust, 165,200 were from Germany, 3 million were from Poland, almost 1 million from the Soviet Union, over half a million from Hungary and over one-third of a million from Romania. In Greece, 58,885 of the country’s 77,000 Jews, or over 76% of the Greek Jewish population, was wiped out. The Jewish community in Greece dates back to before Roman times.

Other speakers and readers included Albert Sutton, a World War II veteran who was involved in the liberation of the concentration camps, and Mark Leslie from Glaslough, Co Monaghan, whose mother, the actress Agnes Bernelle (1923-1999), was born Agnes Elizabeth Bernauer in Berlin, and fled Germany as a young teenager with her family in 1936. 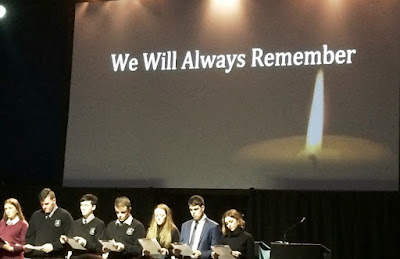 Reading the names of the victims (Photograph: Patrick Comerford, 2016)

Sunday night’s ceremony also recalled the Armenian genocide, when over one million people were murdered between 1915 and 1923, and more recent genocides including Cambodia, Rwanda, Bosnia and Darfur.

During a musical interlude, we heard Rivkele, the Sabbath Wife, sung by Carl Nelkin, accompanied by Mary Barnecutt on the cello. This is a sad love song in Yiddish by Pesach Kaplan, and tells the story of a woman who continued to hope for her husband’s return.

The evening closed with El Malay Rachamim or prayers for the repose of the souls of the departed, led by Rabbi Zalman Len and Cantor Alwyn Shulman of the Irish Jewish community.

Later, I met the grandchildren of other people who had lived in Dublin’s ‘Little Jerusalem’ once again. But there were other memories to take home.