Passing the 1.5 million mark
and still blogging all this time 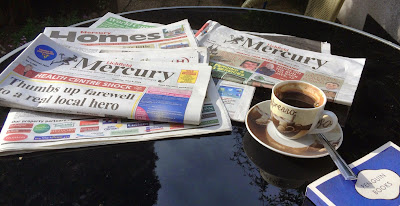 Local newspapers are like old friends … they made me the writer I am (Photograph: Patrick Comerford, 2014)

The number of individual hits or readers on this blog reached the milestone of 1.5 million earlier this evening [13 June 2014].

Part of this in recent months is explained by the number of attacks on this site since 21 November 2013, when the number of hits on this blog passed the 2,000 mark, with 2,004 page-views that day. This also happened to be the day I was the guest speaker at a debate in the ‘Phil’ in Trinity College Dublin, speaking out for Edward Snowden, for freedom of information and for freedom of the media.

Even I did not believe – yet – that I could attract or am deserving of such sudden popularity. But the traffic was furtive, and in one 12-hour period there were more than 40 anonymous efforts to post comments to my postings that appear to be meaningless but also appear to carry malicious viruses with them.

None of the seeming advertising that was being posted to my blog could have had any imaginable interest to my readers.

I opened none of the links, thankfully. But while Google and Blogger have blocked all these attempts, I still receive email notices for every effort, with the links that failed to get through. Since last November they have totalled almost 1,100 attacks on this site.

Monitoring the climb in readers since 2007

The number of potential attacks was reflected in the statistics for the climb in hits:

The figures are beginning to level out again. But because I am anxious to protect true readers of this blog, I pay careful attention each day to posted comments and delete any that have links to advertising that seems dangerous, malicious, distasteful, or that link to sites that run counter to the values I want to promote and encourage. Where others are offensive, I am happy to be ruthless.

I am delighted that this blog attracts more readers, but only if they are real readers.

The numbers are falling back to between 60,000 to 62,000 readers a month or about 15,000 a week. This is still a figure that is higher than many of the provincial or local newspapers that I have worked for.

The majority of local newspapers for which the industry’s official circulation auditor, ABC, provides data have circulation figures at or below 10,000 copies.

The latest available figures show the Limerick Leader is Ireland’s highest-selling local newspaper with 13,420 weekly sales. Just two others broke 10,000 weekly sales, while the average is just 7,600 copies. One analyst says that if current circulation trends – roughly 5 per cent declines per year – continue, local weeklies have about a decade left before they will become extinct. It is difficult to see how any newspaper could survive once sales fall below 5,000 copies weekly.

However, Ireland’s leading newspaper publisher, Independent News & Media, has withdrew 12 of its regional titles from the ABC auditing process, and their latest audited figures date from as far back as January-June 2011. Those figures show:

This represents a total circulation figure for the group of 37,920 in the first half of 2011. Three years later, according to the group’s own figures, the total circulation had dropped to 33,800. Although this figure is not audited, it shows a decline of at least 10 per cent in three years. So this blog has more hits in a week than the sales figures for any title in the provincial newspaper group I once worked for.

The circulation figures for other local newspapers in Ireland and England I have written for include:

Again, this site has more weekly hits than two of these titles. The figures for the Lichfield Mercury are more complex and so defy comparison. The figure for the Mercury includes all four editions serving Lichfield, Burntwood, Cannock, Rugeley and surrounding villages. The figure of 33,992 is the ABC total for 1 July 2013 to 29 December 2013, but 97.6 per cent of these are free newspapers, and only 2.4 per cent are counter sales, so it is impossible to know how many people would buy the Mercury by choice. Perhaps the figure for the Tamworth Herald provides a good starting point when it comes to guessing.

I still have a deep-seated affection for each and every one of these titles. I was happy working with them, and they helped me to become the journalist and writer that I was … and that I still am. I sincerely hope that we are not seeing the decline of the local newspaper, for the local newspaper is like the cement or mortar that holds together the bricks that build up local communities, allowing each constituent part of a local community to relate to the others.

Meanwhile, the ten most popular postings on this blog are: