A blue afternoon in silver sunshine in Bettystown 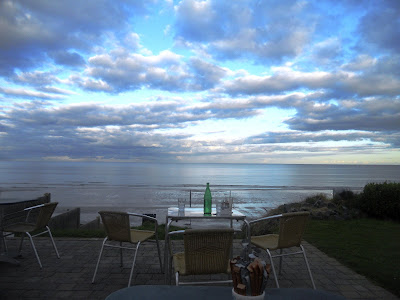 A Santorini-like afternoon on the terrace at Relish in Bettystown, Co Meath (Photograph: Patrick Comerford, 2012)

One Sunday in October, almost 25 years ago, I spent a lazy afternoon in the sun on a terrace in Santorini, sipping wine, reading poetry and listening to Mozart ... undisturbed and waiting for the sun to set.

All the beauty of that afternoon a quarter of a century ago came to mind again this afternoon as two of us sat on the terrace behind Relish above the beach in Bettystown, and watched the silver rays of the autumn sunshine spread through the blue gaps in the sky and along the calm blue waters of the sea. 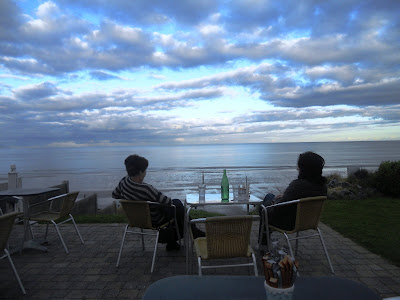 Relaxing on the terrace at Relish in Bettystown, Co Meath (Photograph: Patrick Comerford, 2012)

The temperatures were unseasonably in the mid-teens, rising as high as 15, and although we had to wrap ourselves up well against the slight chill blowing in from the Irish Sea, we let out espressos last for a little longer than usual, sipping in the beauty of the scene beyond us with our coffee. 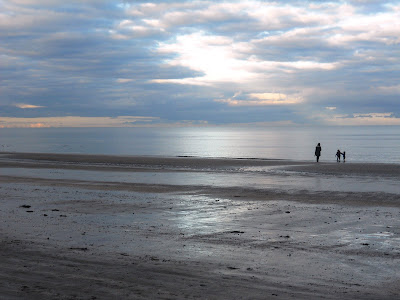 Hints of late summer joys in the autumn sunshine in Bettystown this afternoon (Photograph: Patrick Comerford, 2012)

On the beach below us, although the tide was in, families were enjoying the calm and beauty of this autumn afternoon – two small children, a brother and an older sister were even brave enough to jump about in the waters.

We had a late lunch in Relish, where we were given a table by the window, with clear views south beyond Laytown to the islands off the Skerries coast and north past Mornington and the mouth of the River Boyne to the Mountains of Mourne on the Co Down coast, looking like cut-out blue mountains from a Paul Henry painting.

Blue seemed to be a dominant colour on that terrace this afternoon – in the sky, in the water and in the refractions of light in the pools on the long stretch of golden beach.

Blue and silver and golden memories from Greece half a century ago came back to warm our hearts in Bettystown this afternoon. 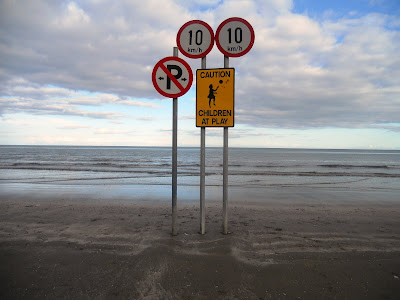 But who would think of parking here ... on the beach at Bettystown, Co Meath, this afternoon (Photograph: Patrick Comerford, 2012)