A new book in the Year of the Rabbit 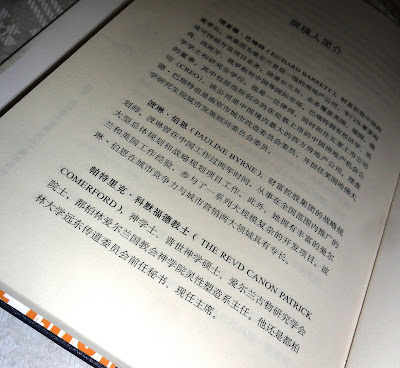 Two years ago, I was involved in a new book examining the centuries-old links between Ireland and China. In July 2009, New Island, in collaboration with RTÉ, published China and the Irish to mark the thirtieth anniversary of diplomatic relations between the People's Republic of China and the Republic of Ireland.

The Mandarin version of the book is being launched in the Chester Beatty Library in Dublin Castle this evening as part of the Dublin Chinese New Year Festival, and follows Dublin City Council’s decision last December to twin Beijing and Dublin.

The Mandarin version of China and the Irish, edited by Dr.Jerusha McCormack and published in Beijing by the People’s Publishing House, will also be presented during the festival to the Chinese Ambassador to Ireland and to the Lord Mayor of Dublin.

This specially commissioned book, based on an RTÉ Thomas Davis Lecture series, gathers a series of your essays together documenting and evaluating Sino-Irish connections.

On the return journey to Ireland at the end of the summer-long fellowship, I stopped off in Beijing just weeks after full diplomatic relations between Ireland and China had been ratified. I have been back to China and the Far East on many occasions since then, visiting Beijing, Shanghai, Pudong, Hong Kong, Hangzhou, Guiyang, Anshun and in many small towns and villages throughout Guizhou Province.

Everywhere, the churches have been warmly welcome, and it was a particular pleasure a few years ago to be with the Irish community in Shanghai on Saint Patrick’s Day. Internal politics in China and the lack of diplomatic relations between Dublin and Beijing would have rendered this unimaginable before I travelled to Japan in 1979. 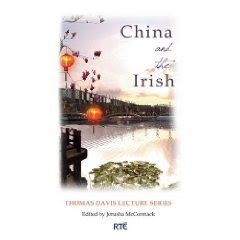 The publication of China and the Irish (right) in 2009 marked the thirtieth anniversary of the establishment of those diplomatic relations.

The book is a pioneering work and the first to explore relations between the Chinese people and the people of Ireland. The book includes eleven essays on an astonishing range of topics, from diplomatic history to music, from business to botanical exchanges and literary connections.

Nine of the essays were first broadcast from June to August 2008 as part of the Thomas David lecture Series in the lead up to the Beijing Olympics. In addition, the book has a welcoming letter from President Mary McAleese and an afterword by the Irish Ambassador to China, Declan Kelleher.

This book makes it clear that although formal diplomatic relations go back only three decades, the people of China and Ireland have a long and complex relationship going back over the centuries.

The editor of China and the Irish, Dr Jerusha McCormack, taught in UCD for 30 years, and has been a visiting professor at Beijing Foreign Studies University. The other contributors are Dr Shane McCausland of the Chester Beatty Library, Dublin, Dr Richard O’Leary of Queen’s University Belfast, Fintan O’Toole and Ruadhán Mac Cormaic of The Irish Times, Brendan Parson (the Earl of Rosse), who worked for almost twenty years with UN agencies, Dr Hwee-San Tan of Goldsmiths College London and the University of Surrey, Richard Barrett and Pauline Byrne of Treasury Holdings, and myself. 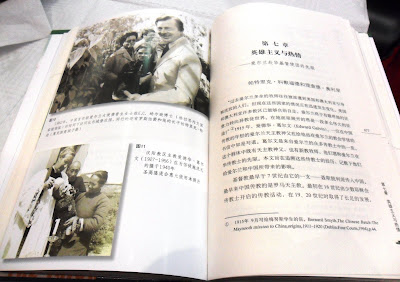 “Heroism and Zeal: Pioneers of the Irish Christian Missions to China” ... a chapter co-written with Dr Richard O’Leary

In our shared chapter – “Heroism and Zeal: Pioneers of the Irish Christian Missions to China” (pp 73-87 in the first edition, and pp 77-92 in the Mandarin edition being presented this evening) – Richard O’Leary and I look at the story of Irish missionaries who have been working in China since the 1840s, particularly those who worked there with the support of the Dublin University Far Eastern Mission, the Church Mission Society and the Maynooth Mission to China (the Columban fathers and sisters).

There were others too, including Vincentians and Christian Brothers, Methodists like Dr George Hadden from Wexford, his wife Helen, and the Revd Desmond Gilliland, and Presbyterians such as the Revd Dr Jack Weir.

This is a beautifully printed and illustrated volume and it has been a real pleasure to be involved in this publication.

May I speak to you in the name of + the Father, and the Son, and the Holy Spirit, Amen

In the Calendar of the Church of Ireland, we commemorate Saint Brigid of Kildare today [1 February].

I was reminded of Brigid twice in recent days – once on Joe Duffy’s Spirit Level, where, after a panel discussion on the new ordinariate, there was a feature on Saint Brigid’s birthplace near Dundalk. And then at the Anglican Primates’ Conference, which was held in Swords, a parish associated with Saint Columba, and so the conversation one evening briefly turned to the three patron saints of Ireland – Saint Patrick, Saint Brigid and Saint Columba or Saint Colmcille.

Indeed, the Roman Catholic parish church near here, on Rathgar Road, is also known as the Church of the Three Patrons.

I suppose good things in the Church often come in threes, especially three points in sermons. So, without preaching a sermon, let me make three relevant points about Saint Brigid this morning:

1, Firstly, there is a lot of legend, a lot of myth, and a lot of “New Age” style writing about Saint Brigid. But, in fact, we know very little about her. Some stories say she was baptised by Saint Patrick. She may have taken her vows as a nun from Saint Mel of Ardagh, who also gave her the authority of an abbot. Some legends say he made her a bishop – the only female bishop in the early church. But whether she was a bishop or not, what we know of her makes her a good model for those who would be shepherds and pastors in the church.

Brigid was buried in Kildare Cathedral, but then, about the year 878, because of the Viking raids, her relics were taken to Downpatrick, where she was buried alongside Saint Patrick and Saint Columba, and they were reinterred in Downpatrick Cathedral in 1186.

The Book of Armagh claims that “between Patrick and Brigid, the columns of the Irish, there was so great a friendship of charity that they had but one heart and one mind. Through him and through her Christ performed many miracles.”

But the legendary nature of most of the accounts of her life means there is little we can say with certainty about her life. The earliest Latin “life” of Brigid was written around the year 800, so we can hardly regard it as a primary source.

However, if we confine Brigid to the shelves of “New Age” books in airport shops and supermarkets, alongside crystal healing and Bigfoot, we take from Irish spirituality an interesting role model for women’s ministry.

2, Secondly, Brigid is not marginal: her legacy is part of our shared Irish cultural heritage. Hundreds of placenames in Ireland and Scotland honour her memory – places such as Kilbride, Brideswell, Tubberbride, Templebride, and so on. Several places in Wales are named Llansantaffraid, which means “Saint Bride’s Church.” And in England, there are 19 ancient church dedications to her, including Saint Bride’s, the journalists’ church in Fleet Street, and Bridewell or Saint Bride’s Well, the parish in which Saint Thomas à Becket was born.

Her small foundation in Kildare became a centre of religion and learning that developed into a cathedral city. According to Giraldus Cambrensis, nothing he had seen ever compared with the Book of Kildare, every page of it was so beautifully illuminated. He says the interlaced work and the harmony of the colours left the impression that “all this is the work of angelic, and not human skill.” Various Continental pre-Reformation breviaries commemorate Saint Brigid, and her name is included in a litany in the Stowe Missal.

But the rich insights of the monasteries are not only for men, nor for one tradition on this island; they are part of our shared, common Christian heritage, from long before the Reformation.

3, And thirdly, Brigid is an interesting role model for the full place of women in the ministry and mission of the Church. From the sources for her life, we can see that – despite the legends and the myths – Brigid was celebrated for many reasons:

● She converted to Christianity at great personal cost, giving away her personal and inherited wealth.
● At a young age, she gave her life to God, choosing to serve God and to serve the poor.
● She balanced wisdom and common sense – something most of us find lacking in equal measure, most of the time.
● She was a spiritual guide to both men and women.
● She is known for her humility.
● She served the wider church as the pastoral in a large geographical area.
● She built the church, laying both the physical and mission foundations.
● She was one of those Celtic saints who insisted that a vital component of the spiritual life is having a soul friend (anam cara).

More than anything else, though, Brigid is known for her hospitality. When the poor and the infirm came to her in their multitudes, she provided for them, tending to the poor, the lowly and the forgotten, living out the Beatitudes as we heard them on Sunday. She saw that the needs of the body and the needs of the spirit are inter-twined. And that to me is good enough reason to remember Saint Brigid this morning.

Canon Patrick Comerford is Director of Spiritual Formation, the Church of Ireland Theological Institute. This reflection was shared at the Eucharist on Saint Brigid’s Day, 1 February 2011.

The photograph is of a stained glass window in Christ Church Cathedral, Dublin (Patrick Comerford, 2011) ,br />