A reflection in Studies on Vatican II 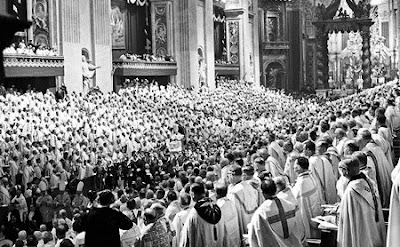 The current edition of Studies (vol 101, no 404) is dedicated to reflections from a diversity of viewpoints on the state of the Roman Catholic Church, especially in Ireland, 50 years after the Second Vatican Council began in the winter of 1962.

Studies is an Irish Quarterly Review. The current edition is published in Dublin this week, although it is dated Winter 2012.

The online edition contains the full text of the lead article, along with abstracts from the remaining articles.

In the lead article, ‘Irish Catholicism at a Crossroads,’ Father Gerry O’Hanlon of the Milltown Institute says: “It is a great blessing, on this fiftieth anniversary, to recall the gift of the Holy Spirit given to the Catholic Church, all Christians and the world, by the Second Vatican Council. The Council reaffirmed the good news that the church was called to be the ‘light of the world’, to reveal the love of God for all human kind and to share all human hopes and fears. The mood was hopeful and even joyous.”

The other contributors include: Father Jim Corkery, the Jesuit theologian, ‘Whither Catholicism in Ireland?”; Father Brenan Hoban, founder member of the Association of Catholic Priests, “How did it come to this?”; writer and teacher Breda O’Brien, “Going beyond the divisions”; Professor Declan Kibberd of the University of Notre Dame, “Ireland after Aggiornamento; and Aoife McGrath from the Diocese of Waterford and Lismore, “Lay Pastoral Ministry in the Church.”

Studies, which was first published in Dublin in March 1912, is published quarterly by the Irish Jesuits and is edited by the Revd Bruce Bradley. The journal examines Irish social, political, cultural and economic issues in the light of Christian values and explores the Irish dimension in literature, history, philosophy and religion.

Email ThisBlogThis!Share to TwitterShare to FacebookShare to Pinterest
Labels: Ecumenism 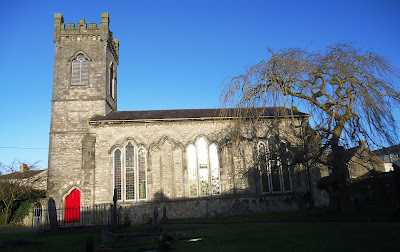 Yesterday’s snow has melted away, and Kilkenny is a bright, sunny city this morning, with clear blue skies.

The closing day of the Dublin and Glendalough Diocesan Clergy Conference began today with the Eucharist, celebrated in Saint John’s Church by the conference speaker, the Revd Bruce Pierce.

We plan to return to Kilkenny for next year’s conference (3 to 5 February 2014), when the conference speaker is the American theologian and Biblical scholar, Marcus Borg.

Marcus Borg is Canon Theologian at Trinity Episcopal Cathedral in Portland, Oregon, and Fellow of the Jesus Seminar. He held the Hundere Chair of Religion and Culture in the Philosophy Department at Oregon State University until his retirement in 2007.

He is the author of more than 20 books, the latest of which is Evolution of the Word (2012), a chronological New Testament.

After the conference, Professor Borg will give a public lecture in Trinity College Dublin on Thursday 6 February 2014.

Posted by Patrick Comerford at 12:09 No comments:

Strolling through the mediaeval capital of Ireland 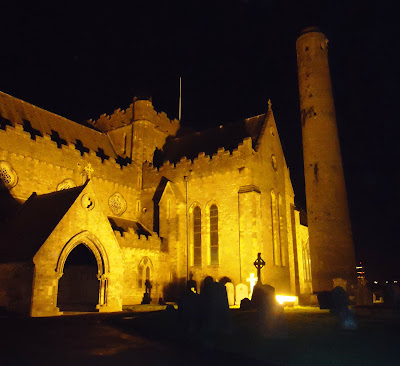 At the end of a working day at the Dublin and Glendalough Clergy Conference in Kilkenny today [6 February 2012], I was at a reception for the clergy in the Deanery beside Saint Canice’s Cathedral.

Earlier in the evening, we had taken part in Eucharist in the cathedral, at which Archbishop Michael Jackson presided.

Earlier in the afternoon, I had visited Saint Mary’s, the Roman Catholic Cathedral, which claims to preserve the body of the third century girl martyr, Saint Victoria. 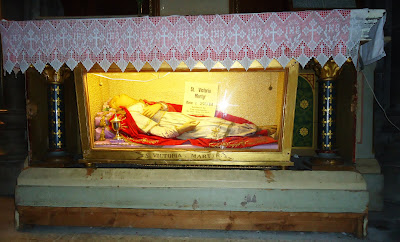 In fact, we know little about Saint Victoria. It is said that Victoria and her sister Anatolia refused importunate suitors. Both were jailed and starved by their suitors but persisted in refusing marriage. Anatolia was converted to Christianity and converted many people in Picenum before being denounced for her faith.

Anatolia was tortured and executed at Thora on Lake Velino in Italy. When her sister Victoria refused to sacrifice to pagan gods, she too was executed, perhaps at Tribulano, at the age of 14½. But her guard was converted by their example and he too was martyred.

Perhaps the story of these sister martyrs is no more than a pious myth, but they are commemorated in the some parts of the church on 23 December, and Saint Victoria’s body is on display in Saint Mary’s Cathedral here in Kilkenny. 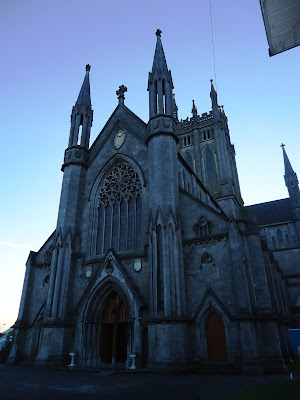 Saint Mary’s is built in Gothic style of local limestone and stands on the highest point in Kilkenny, on the site of an old mansion, Burrell’s Hall, the first centre for Saint Kieran’s College.

The cathedral was consecrated in 1857 by Bishop Edmond Walsh of Ossory. At that ceremony, the new cathedral received relics of Saint Clement, brought from the Catacombs in Rome, and of the martyrs Saint Cosmos and Saint Damien.

But the wax most spectacular and publicly visible relic in the cathedral is the figure of Saint Victoria can be seen in the North Transept under the Saint Margaret Mary Altar. In front of this wax figure is a chalice that is said to hold the preserved blood of this early saint. Both were sent to Kilkenny by the Pope in 1845 while Saint Mary’s Cathedral was being built.

Perhaps, in the early years of Queen Victoria’s reign, Kilkenny Catholics needed another Victoria – however mythical – to expresses and assert a newfound confidence.

The cathedral also has a Sacred Heart altar with a statue and altar rails designed by James Pearse, the Birmingham-born Unitarian who was the father of Padraig Pearse, one of the 1916 leaders.

The cathedral suffered many unfortunate changes in 1977, so that the former sanctuary area now looks like a storage area for chairs, cushions and furniture. 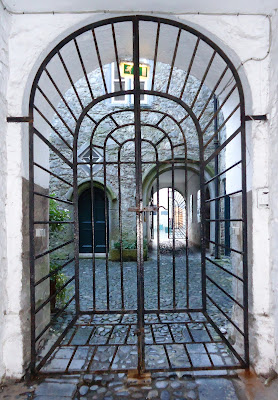 During my walk through this mediaeval city earlier in the afternoon, I also paid my nodding respects to the Langton House which had been a home briefly to previous generations of the Comerford family in the late 18th and early19th century, visited Rothe House, the home of the Kilkenny Archaeological Society, and passed some delightful time, without measure or counting in the Book Centre on High Street.

In the Book Centre, I bought Professor Michael Olden’s new book with the beguiling title, The Life & Times of Patrick Comerford OSA (1586-1652), Counter-Reformation Bishop of Waterford and Lismore 1629-1652.

I pored over this volume in Mug Shot, a welcoming and delightful coffee shop beside Saint Mary’s Cathedral, in James Street, before making my way on up to Saint Canice’s Cathedral. Oh, the sweet delights of a double espresso where they know what they are doing. 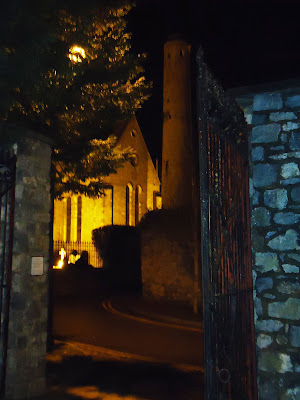 Saint Canice’s Cathedral, Kilkenny, seen from the grounds of Deanery in Kilkenny in the late evening light (Photograph: Patrick Comerford, 2013)

Posted by Patrick Comerford at 01:09 No comments: