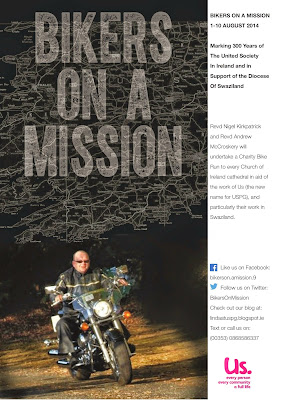 I am taking part in the annual conference of Us (the United Society) in the High Leigh Conference Centre near Hoddesdon, Hertfordshire, next week (23-25 June 2014).

Us is an Anglican mission agency that began life 300 years ago to bring the Gospel to foreign places – hence the Society for the Propagation of the Gospel or SPG, later USPG and now Us). Us is one of the oldest mission agencies in the Anglican Communion and in the Church of Ireland, and today Us partners people and communities around the world through their local churches.

Two Church of Ireland rectors, the Revd Andrew McCroskery, Rector of Saint Bartholomew’s, Ballsbridge, and Christ Church, Leeson Park, Dublin, and the Revd Nigel Kirkpatrick, Rector of Gilnahirk in Belfast, are taking part in the “Bikers on a Mission” road trip in August to raise funds and to highlight the work of the United Society (Us).

Us in Ireland fundraises for church-based projects in Swaziland, one of the poorest countries in the world. Swaziland is a tiny African kingdom surrounded by South Africa and Mozambique. There 26% of all adults are HIV-positive, and the need for outside aid is immense.

A few months ago, Linda Chambers, Director of Us Ireland, went barefoot throughout Holy Week to draw attention to the plight of people in Swaziland, and raised €8,000 for Swaziland.

Now Andrew and Nigel, who are also motor cycle enthusiasts, have responded and are raise funds for Us. They are using part of their annual holiday time to visit all 30 cathedrals of the Church of Ireland over a 10-day period, starting on the August bank holiday weekend. This journey around the cathedrals of the Church of Ireland also marks the 300th anniversary year of the presence in Ireland of the United Society.

From 1 to 10 August, Andrew and Nigel will make a motorbike run to every cathedral in the Church of Ireland in aid of the work of Us Ireland and in support of the work of Us in Swaziland. They will do a complete circuit of Ireland visiting two to four cathedrals a day. At each stop they will either join in a service or lead a short prayer service.

Their planned schedule is:

Andrew and Nigel hope local bikers will come with them for part of the run and that people will offer donations to support the work of Us in Swaziland.

Every parish in the Church of Ireland has been written to, asking for prayers and support for the event and for a donation to the work of the Us in Swaziland.

Swaziland has the highest HIV infection rates in the world and the population of 1.1 million is in decline. The Anglican Diocese of Swaziland is small but mighty, reaching every corner of the country and help is given to all, irrespective of faith or denomination.

Most people in rural areas still only practice subsistence farming, and many parishes run feeding stations, home-based care teams for the sick and orphan care.

The Diocese of Swaziland relies on outside donors to help run its development programmes and the Us in Ireland funds the work of the Diocesan Development Officer and works with Bishop Ellinah Wamukoya towards self-sufficiency.

One of the major projects supported by Us in Ireland is the Luyengo Farm project. Luyengo Farm is an important teaching aid for local people and a source of employment, and it is also an income generator for the Diocese of Swaziland, helping to support many HIV/AIDs programmes, schools and care of the sick and orphaned.

A Facebook page has also been set up for the Bikers on a Mission and they are on Twitter @BikersOnMission. Motorcyclists who wishes to join them – even if only a short part of the trip – are welcome in exchange for a donation to the work of the United Society.

If you cannot be with Us or us and would still like to make a donation, you can send it to Linda Chambers of Us Ireland at Egan House, Saint Michan’s Church, Church Street, Dublin 7, or through the donate button on Linda’s United Society blog.