Herculaneum provides an insight into
life before the eruption of Vesuvius 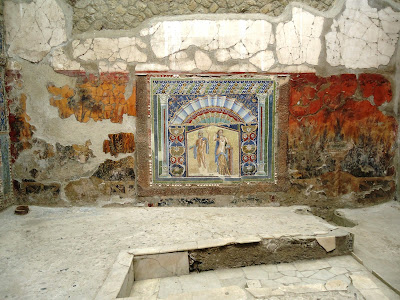 The frescoes in the richly decorated east wall of the House of Neptune and Amphitrite (Photograph: Patrick Comerford, 2013)

On the programme for this week in the Sorrento area, Friday [5 July 2013] was listed as a “Day at Leisure,” or a free day to relax at the hotel pool, or to explore the bustling town of Sorrento, with its shops, cafés, restaurants and views, with a transfer to and from the town centre.

Instead, almost two dozen people signed up for a morning’s visit to Herculaneum, a town that is less well known than Pompeii, but which gives a more intimate opportunity to understand the devastation and human tragedy of the eruption of Mount Vesuvius in the year 79 AD. 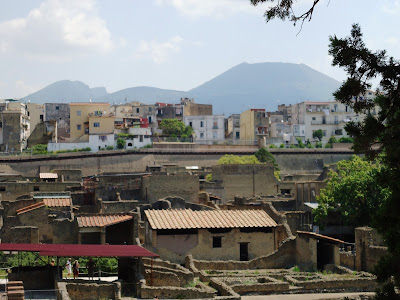 Herculaneum is smaller than Pompeii, but the site is more intimate and more accessible (Photograph: Patrick Comerford, 2013)

The enclosed site at Herculaneum is close to the modern town of Ercolano, south-east of Naples. Compared to Pompeii, this was a small city, of about 20 hectares and 4,000. Only a tiny proportion of the site – about 4.5 hectares – is accessible to the public, but in many ways this a far more tangible, and so much less cluttered a site than neighbouring Pompeii, which is better known and has a constant flow of tourists and sightseers each day.

In Herculaneum, it is easy to imagine how the ordinary people lived and worked, shopped and worshipped, relaxed and were governed.

There are private houses with gardens and courtyards; shops and pubs; men’s and women’s baths; public fountains and latrines; boarding houses 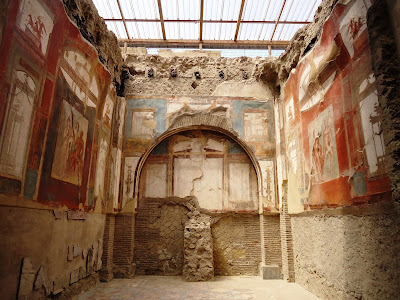 The Hall of the Augustals is richly decorated with frescoes depicting scenes from the legends of Hercules (Photograph: Patrick Comerford, 2013)

The Hall of the Augustals has frescoes depicting scenes from the legends of Hercules, including a depiction of Hercules accompanied by Jupiter, Juno and Minerva; and an illustration of the battle between Hercules and the Etruscan god Acheelo.
.
The House of Neptune and Amphitrite takes its name from the themes in the mosaics in the richly decorated east wall. The food shop next door almost looks like it is closed for a siesta and ready to reopen in a few hours’ times. 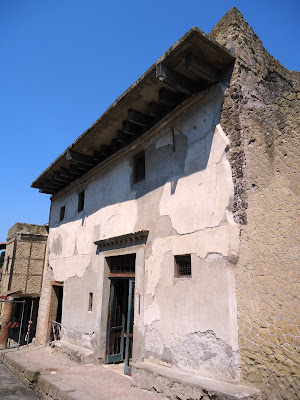 A house with overhanging eaves on a street in Herculaneum (Photograph: Patrick Comerford, 2013)

The Trellis House is a boarding house with an overhanging balcony. The House of the Wooden Partition displays the comfortable lifestyle of the prosperous ruling class.

Outside the Cucumas Shop, you can still see a listing with the different prices for the four varieties of wine once on sale here. At the large taberna or pub, it was possible to realise how like Europeans today these people were in so many aspects of life and lifestyle.

We were back at the Grand Hotel Moon Valley shortly after mid-day, and two of us took the Circumvesuviana from Seiano to Vico Equesne, where we strolled through the streets and along the sea front, looking down at the beaches and across the bay to Naples. 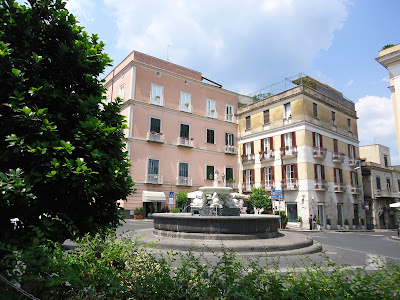 Piazza Umberto I is a quiet and shaded corner of Vico Equesne (Photograph: Patrick Comerford, 2013)

Sadly, the two churches we tried to visit were not open, not was the famous Da Gigino pizzeria, where the claim to fame is that there they invented the idea of “Pizza by the Metre.”

We made our way to a shady corner of Piazza Umberto I, with its fountain, foliage and trees, and had lunch in Wembley, a pizzeria on the corner of the square, before returning to the hotel to swim and enjoy the late afternoon sunshine. 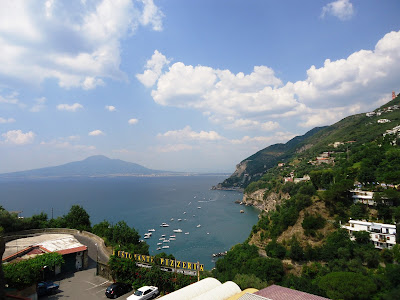 Looking out on the Bay of Naples in Vico Equesne (Photograph: Patrick Comerford, 2013)