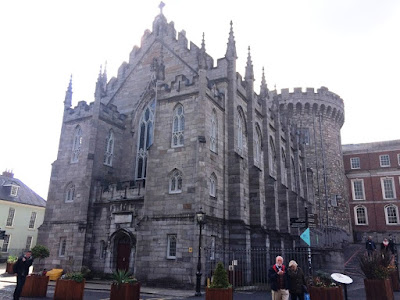 I visited Dublin Castle last week to see ‘Pinnacles, Pomp & Piety,’ an exhibition in the State Apartments marking the bicentenary of the Chapel Royal.

The exhibition, which opened earlier last week, includes furniture, silverware, portraits and historic drawings, and brings together the work of a variety of artists, craft workers and patrons who contributed to the story of the Chapel Royal.

The exhibition is accompanied by a handsome new book, The Chapel Royal, Dublin Castle, An Architectural History.

The contributors look at a wide range of topics relating to the Chapel Royal from music and liturgy to the art of book-binding and stained glass and from stuccowork to plate, pinnacles and carved stone.

Both the Chapel Royal and the GPO in Dublin Castle were designed by the architect Francis Johnson (1760-1829) – one in the Gothic Revival style, the other in the Classical style. Yet, as the exhibition and the book’s contributors point out, the Chapel Royal cost more to build.

Christ Church Cathedral, Dublin, served as the Chapel Royal for hundreds of years. King Charles I designated the cathedral “our chapel royal.” Later, James II continued to recognise Christ Church as “our chapell royal,” although he introduced Roman Catholic rites and ceremonies for a brief period in 1688-1690.

The Chapel Royal in Dublin Castle was built on the site of an earlier church built around 1700. Building work began in 1807. The Chapel Royal was built on soft ground, using a timber frame to make it as light as possible. The chapel took seven years to build, though a contributory factor in both time and budget was the “sheer opulence” of its Gothic Revival interior.

The chapel was completed in 1814 at a cost of £42,000. The first service was held in Chapel Royal on Christmas Day 1814. It is said the Lord Lieutenant, Charles Whitworth, 1st Earl Whitworth, contributed the centre portion of the large stained-glass window above the altar. He bought it in Paris, but reputedly it had originally come from Russia.

From its opening, the Chapel Royal was the focus of the spiritual and social life of successive Lords Lieutenant, or Viceroys, with regular Anglican worship each Sunday, and dedicated pews reserved for the Viceroy Lord Lieutenant and his household. King George IV went to church here in September 1821. 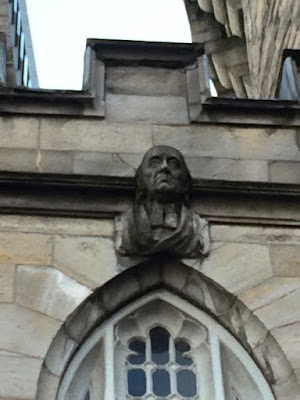 The exterior is decorated with over 100 carved stone heads by Edward Smyth (1749-1812), also responsible for the “river heads” on the Custom House, and his son John Smyth ca 1773-1840), responsible for the statues on the GPO. However, the heavily ornate Gothic exterior masks an equally ornate interior with internal plasterwork first designed by George Stapleton, and wood carvings by Richard Stewart.

The interior is also notable for its old stained glass, bought on continental Europe for the chapel. The carved oak galleries displays the coats of arms of the knights of the Order of Saint Patrick. The arms of all the Viceroys from 1172 until those of the last Viceroy, Viscount FitzAlan of Derwent (1922), are displayed in wood carvings and in the stained glass.

Myles Campbell recalls how, less than half a century after its opening, major changes were made to the Chapel Royal by George Howard, 7th Earl of Carlisle, who was Viceroy of Ireland from 1855 to 1858, and again for a second term from 1859-1864. His transformation of the Chapel Royal was indebted to the version of the Gothic Revival introduced by AWN Pugin (1812-1852), who died three years before Carlisle arrived in Ireland.

Carlisle’s first act was to dismantle the original organ in favour of a new Telford organ. He then removed the imposing double-height pulpit from its prominent central position in front of the chancel, and replaced it with a new, smaller pulpit, carved in Caen stone designed by James Owen and manufactured by John Hardman & Co, a Birmingham firm with Dublin offices that was closely associated with Pugin. 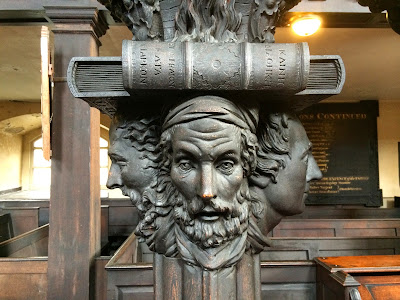 The old carved wooden pulpit was moved to neighbouring Saint Werburgh’s Church, and the new carved pulpit was placed it at the north side of the chancel in January 1860. Now the altar could be seen clearly, making the celebration of the Holy Communion or the Eucharist the main focus of attention. To enhance this view, the choir boxes were moved back, flush against the aisle pews.

These moves were influenced not only by the school of architecture that had developed from Pugin’s work, but also drew on the insights of the Oxford Movement or the Tractarians.

The chapel ceiling was transformed too, decorated in blue with gold stars by the church decorators Earley and Powell, a partnership also closely identified with Pugin. Carlisle also commissioned new stained-glass windows, also designed by Earley and Powell.

Carlisle was also a moderniser, and had gas lighting installed in 1860, removed the canopy over the vice-regal pew, and removed pews from the nave, replacing them with new Gothic Revival pews.

In the space of seven years, Carlisle had transformed the Chapel Royal from a dreary, dark chapel to a bright, welcoming centre of worship that would have delighted Pugin and the Tractarians.

There is a family tradition that when my great-grandfather James Comerford (1817-1902) moved from Wexford to Dublin after Pugin’s death in 1852, he had worked on the stucco work in the Chapel Royal in Dublin Castle. As he was born after Johnson’s chapel had been completed, I imagine he worked on the Chapel Royal during Carlisle’s transformations. He later described how he was employed by the Board of Works, and although he worked on other projects he described himself in 1901 census returns, a year before his death, as “civil servant, retired.”

The last Viceroy, Lord FitzAlan, was a Roman Catholic and his appointment as Viceroy was seen as a sign of a token of Britain’s conciliatory attitude to Irish demands for independence. But his appointment left the Chapel Royal in an anomalous position, for he could not attend the Anglican worship in the chapel.

With the foundation of the Irish Free State on 16 January 1922, future of the Chapel Royal was in doubt. Services continued to be held in the Chapel Royal until Christmas Day 1922. In 1943, it was re-dedicated as a Roman Catholic church for use by the Army.

The Chapel Royal was closed for renovations in 1983 but it is now emerging from a renewed period of dormancy, and this exhibition and the accompanying book brings the story of the Chapel Royal back to life.

Rita Larkin of the Royal Irish Academy, a teacher and art historian, looks at Edward Smyth (1749-1812) and John Smyth (ca 1773-1840) and their ornamented carvings for the Chapel Royal.

Dr Angela Alexander looks at how the vice-regal chapel was furnished and the work of the craftsmen in this, including cabinet makers and upholsterers, while Joseph McDonnell, an expert on Irish stuccowork and bookbinding, looks at the bindings of the prayer books in the chapel.

David O’Shea, Director of Music at Sandford Parish, Ranelagh, examines the music and liturgy in the Chapel Royal.

Dr Myles Campbell, joint curator of this exhibition at Dublin Castle, offers an all-embracing and succinct account of the history of the Chapel Royal from 1815-2015.

David O’Shea lists the organists of the Chapel Royal. However, missing from the book is an account of the Chaplains, Deans and Sub-Deans of the Chapel Royal in Dublin Castle, their place in the life of the Church of Ireland, and how they continued to hold office with state appointment for half a century after disestablishment:

The exhibition continues in the State Apartments, Dublin Castle, until 6 March 2016. 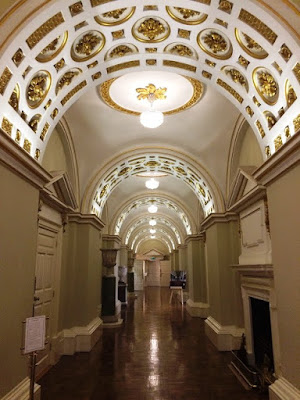